by Brittany Eble 6 months ago in Fantasy 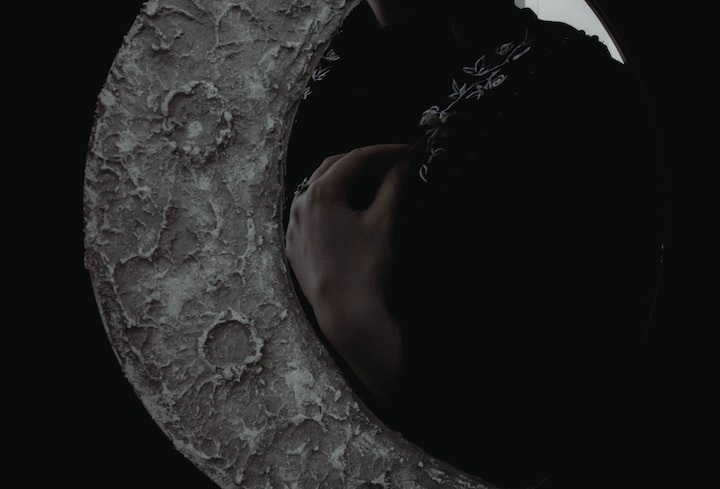 Photo by Ksenia Yakovleva on Unsplash

Aiden watched a small red-headed girl pacing outside the shop. She tugged nervously at the drawstrings on her jacket and her shoulders curled inward as if to make herself smaller. It was dusk, and October certainly wasn't the best time of year for children to visit the apothecary. There was no telling what creatures might appear as the barrier between the living and dead weakened. By the girl's expression, you'd think the grim reaper himself might be inside.

A tall man resembling a grizzly bear in a blue knitted cap trudged up the sidewalk and grumbled passed the girl, muttering something about his drunken wife as he went. He approached the counter, removed his cap, and looked entreatingly at the sullen young woman behind the register.

“Is your mother here?” He asked as he surveyed the room.

Thaddeus stroked his dark beard, clearly agitated, and began rummaging through his pockets. “I don’t have the full amount now, but Captain is promising a good catch this season. I can give you everything I have now.”

A mass of small bills and coins spilled onto the counter. Thaddeus frantically tried to gather them, but Aiden coolly laid a hand on his arm.

“Of course,” she said gently. “I have your order in the back.”

She ignored Thaddeus’s sharp intake of breath and retreated to the back room to search through the sea of disorganized bottles lining the dusty shelves. Over the years of training with her mother, she’d developed a knack for quickly unearthing potions from the hoard. She took her time, allowing Thaddeus a moment to regain his composure. As she meandered along a row of potions above the fireplace, a small blue bottle filled with an inky black fluid caught her eye. She scooped it up before returning to the register.

“Thank you,” Thaddeus cleared his throat.

Thaddeus prickled up defensively like a bear assessing a threat. “This will help her, won’t it?”

“Hopefully,” Aiden replied. “Put a dropper full in Claudia’s drink. She’ll be forced to face whatever is underlying her drinking problem. It’s up to her whether it works or not.”

“How long will it take? My ship leaves in three days.”

“You’ll know the outcome within a few hours,” Aiden explained. “I must warn you, any number of reactions may occur. The only thing I can guarantee is that she’ll develop a fever and chills. If her sweat is a dark color, she’ll be okay. If it’s clear and she begins to seize, she’s unlikely to pull through.”

Thaddeus’s face turned pale as he stared at the bottle. “What happens if it doesn’t work?”

Aiden shrugged. “That depends on the severity of her trauma. Chances are she’ll wake up the next day and go right back to drinking, but people have gone mad before. Whether that’s worse than what you’re experiencing now is for you to decide.”

He stood there for some time contemplating while Aiden began inscribing the sale in the massive record book behind the counter. Finally, he snatched the bottle in his large hand and turned on his heel.

Remembering the little girl, Aiden glanced over her shoulder as she heard the bell on the door chime. Thaddeus held the door open and gestured for her to go inside.

“Would you flip the ‘Closed’ sign around when you come in?” Aiden called.

The girl thanked Thaddeus and scampered through the doorway, her hands trembling as she fumbled with the sign in the window. Inching toward the counter, she looked around timidly as if watching for something to pop out at her. She looked no older than ten and her slight frame gave the impression a breeze would blow her away. Despite her appearance, she was very brave to seek out a witch so close to dark.

“How may I help you?” Aiden attempted to produce a reassuring smile.

“I-I’m looking for my big brother,” the girl stammered.

“Were you supposed to meet him here?”

She shook her head. “I’ve been looking for him for days. I’m scared something happened to him.”

“What about your parents?” Aiden pressed. “They don’t know where he is?”

“My mom is dead, and my dad isn’t around,” she replied. “My brother takes care of me.”

Aiden took a long breath as she mulled over what to do. She wasn’t especially good at locator spells, but she didn’t expect her mother to come back anytime soon. Perhaps this would be good practice.

“My name is Aiden,” she held out her hand.

“Danny,” the girl smiled back, seeming much less afraid than she had a few moments ago.

“I’ll be honest with you, Danny, you might be better off to wait for my mom. You can come back tomorrow when she’s here, or I can give it a shot,” Aiden proposed. “Worst case scenario, we don’t find him and I take you home.”

“Great! Do you have anything of your brother’s with you?”

Danny pursed her lips and began checking her pockets until she produced a piece of paper. “This is the note he left me the other morning. Will it work if it’s his handwriting?”

She led Danny into the back room where she gathered three containers – one with a gray powder, another with a green bubbling fluid, and some kind of pickled root. Danny watched her pour a clear solution into the cauldron over the fire and mix varying amounts of the other three ingredients while muttering some unintelligible incantation. The flames below the cauldron began to sputter multi-colored sparks. Then Aiden lit a corner of the note on fire and dropped it into the smoking black pot. Danny screamed and fell to the floor as the flames engulfed the fireplace mantel and filled the room with a sickly green light.

A popping noise like firecrackers sounded from the cauldron and a large puff of smoke appeared to draw the light out of the room. It was pitch black for a moment before the fire lit itself and the room was made visible again.

“Sorry,” Aiden leaned down to help Danny off the floor. “I forgot to tell you about the noise.”

Aiden grabbed a ladle from a hook near the mantel and scooped the shimmering green powder into a small bottle.

“Hold onto me,” Aiden warned. “I’m going to throw a handful of this above our heads. You’ll feel a rush like being on a carnival ride and then we should appear wherever your brother is. Are you ready?”

Danny clung to Aiden and held her breath.

The powder turned to green smoke and carried them off in a whirl of wind and thunder. Danny cried out as they spun in midair. When she opened her eyes again, they were standing in a graveyard with no other soul in sight.

Danny looked frantically around headstones. “Peter! Are you here?”

“Isn’t there anything else you could try?” Danny pleaded.

Aiden paced as she tried to think. There was a way to amend the spell, but what was the ingredient?

“Was your mom buried in this cemetery?” she asked.

Danny moved to the next row of headstones and dropped her head. “This is her grave.”

Aiden followed and knelt down to dig through the moss-filled grass.

“What are you doing?” Danny demanded.

“I need earth that’s been in your mother’s grave a long time,” Aiden explained.

She uncorked the bottle of green powder and sprinkled the dirt in while reciting another incantation. The powder caught flame inside the bottle and the same green smoke engulfed them. Aiden grabbed ahold of Danny as the sickening feeling of falling overtook her. Once she felt solid ground beneath them, she looked around to find they were on a brick street near the dock.

“Do you recognize where we are?” Aiden asked while looking up and down the street.

When Danny didn’t respond, Aiden turned to see her staring at a black door in what looked like an average townhouse. Her petrified expression was nearly identical to the one she’d had while pacing in front of the shop.

“Do you know who lives there?” Aiden asked.

Aiden waited to see what Danny would do, but she just stood there, her face getting paler by the moment. Finally, Aiden put a hand on her shoulder.

“Do you want me to take you home now?” she asked.

Danny’s jaw set and tears welled up in her eyes.

“I remember what I was supposed to do now. I have to go in there.”

A shriek pierced through the door, startling Aiden, but Danny was already walking inside. Aiden followed her, confused as she was led to a cramped sitting room at the back of the house. Thaddeus was knelt on the floor near his wife. Her clothes were drenched from sweat and her body was painfully contorted from convulsing.

Thaddeus looked back at Aiden in dismay and then relief.

Aiden moved toward the pair, but Danny threw her arm out to stop her. A spectral glow emanated from the little girl. She and Thaddeus watched in shock as Danny knelt down above Claudia while the woman begged not to be killed.

“I’m not here to hurt you,” Danny said quietly and placed a hand on Claudia’s as she began to seize.

Her dark eyes rolled to the back of her head and she became incoherent for several minutes. Aiden told Thaddeus to put her on her side until the seizure subsided. Even as she seemed to regain control of her body, she continued to sob and fight against Danny and Thaddeus’s grip.

“Stop fighting or you’re going to die,” Danny shouted in her face. “I came because I don’t want you to die!”

Claudia continued to wail as the small child shook her about. “I’m so sorry, Danny! When you slipped off the cliff’s edge… I was too scared to help you. I just stood there when you fell… I saw you hit the rocks... You were screaming for me to help you and I just stood there!”

Danny closed her eyes tightly as if trying to suppress the image.

“It was an accident,” Danny’s voice was calm. “You were only seven. If you would have tried to help me, we both would have died.”

Claudia shook her head. “Dad said he didn’t blame me, but I know he did.”

“That’s not true,” Danny protested. “Peter loved you so much, and so do I! Claud, you’re like my sister. Do you think I want you to live out your life like this?”

“But it was my fault you died,” Claudia sobbed.

Danny shook her head, suddenly looking exhausted. “It was my idea to play near the cliff. I was trying to scare you and I slipped. How could you be at fault?” Her head began to droop, and she laid down next to Claudia on the ground. Whatever energy had allowed her to take a physical form, it was fading quickly. “You have to live for both of us now, okay? I want you to do everything I never got to do. Promise me you’ll try.”

Danny smiled and held Claudia’s hand tight against her chest. Slowly, her spectral form evaporated. Thaddeus gripped his wife’s frail hand, his expression a mixture of shock and relief as Claudia’s skin began to bead with violet hued sweat.

Aiden decided it was best to leave quietly since it looked like Claudia would make a full recovery. During the long walk back to the shop, she promised herself she would never be fooled by a ghost again.

Thanks for visiting my page!

Read next: That Sinking Feeling ...