Lost in the Desert

by Lucien Lecarme 6 months ago in Short Story
Report Story 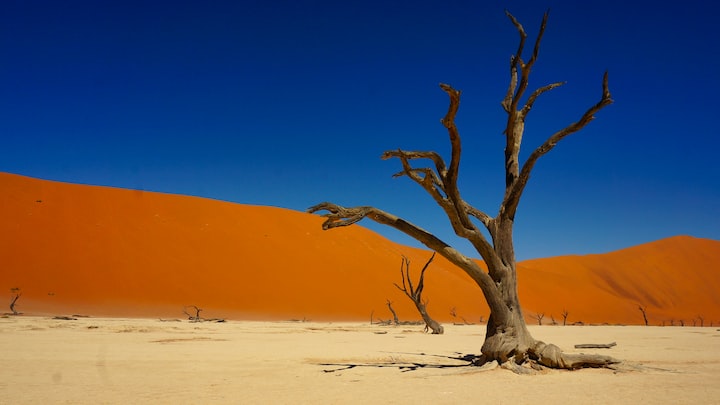 Photo by Sean Robertson on Unsplash

The drone camera zooms in on the just married couple. They left their Akubra hats in the coach. A deadly sin in the desert.

Moments ago they were confident tourists watching the barren red desert behind sun-stained glass. Like an aquarium, staring fascinated into the void of the Australian central desert.

No water is to be found anywhere.

How did these Aboriginal people survive? they wonder, behind their Versace sunglasses.

A rising doubt cracks the glass of the fishbowl of their mind. They're in the real world now. A hot stove. They increasingly feel like cookies, served to an unknown hostile destiny.

They stopped the bus for a pee and an Insta.

The coach had left Alice Springs just 2 hours ago. All around, a vast space of emptiness filled with hot air, spinifex grass, and more nothingness.

The man touches the spinifex and cuts himself. The grass is like a sharpened kitchen knife.

Their pupils widen while their heads move searchingly from left to right. The couple makes a decision and they walk a few meters in the right direction.

It can't be that far? It feels like they only walked a few hundred meters, talking and gesturing, in search of a sufficiently big enough grass pollen to pee behind. Out of sight of the other passengers. And next, the Instagram selfie.

The scene becomes clearer when the drone moves up by a few meters. We have the comfortable overview, but not the couple searching for the exit sign of this pending nightmare.

Doubts tell them No, it was the other direction after all. Clear thinking evaporates rapidly in 45 degrees of dry, stone age-old air. They carry on, further away from the coach. With each step, more stress, the increase of heartbeats per minute.

There is no proof of any sweat because perspiration vaporizes immediately in the barren heat. Still, they lose a lot of bodily fluid. Their bottles of water are in the coach, together with their newly bought hats. They were going into the dry land for a piss, not to drink more. At least, that was the plan just, what? Twenty minutes ago. But also time vanishes fast. Like tiny drops of sweat, the seconds and minutes disappear as swift as their courage.

They don't hear the shouts of their fellow travelers, nor the honking of the coach. The sound disappears in the sea of emptiness.

The tour guides noticed their absence. The group leader walks in the same direction together with two colleagues. The clumps of spinifex grass are extending to the left and the right, as far as the eye can see. There is no slight hill or rock anywhere to climb on to spot those silly tourists.

The couple is really out of luck today.

By now they have deviated slightly to the left, and they lost the straight line. They stop again and deliberate with clammy hearts. It looks like they have chosen the wrong direction, so should they go back again?

The lack of orientation is a devil. The sun a hungry vulture above their heads. Combining the position of the sun with the hour of the day, they could have determined where the south and north lie. In waves of rising panic, however, thinking coolly and logically is becoming increasingly difficult. Meanwhile, dehydration has set in like a boa-constrictor with a bad smell sneaking up from behind. The syrup in their heads is thickening.

They run, back again.

Due to the slight deviation, they don't run back but just past the point where the road makes a slight bend to the right. They miss the road by twenty meters.

The couple now runs towards the far emptiness, heavily breathing

What began as an exciting toilet break and a kick-ass Insta in the make is turning into a nightmare. All of a sudden, everything around them seems hostile. Everything had appeared manageable from the coach. Dear sweet postcard desert.

The drone goes straight up.

The running people are becoming ever smaller moving figures, hand in hand for now. Later wild panic will kick in and it will be each for themselves.

The two small moving heads can still be seen for a few seconds when we zoom in. There they are, moving in an endless draughtboard of grass clumps and red earth.

And then the two small dots have disappeared.

A magnificent symmetric pattern slowly unfolds. Divine mathematics of a hypnotic regularity. Quiet has returned in the picture. The drone bids farewell to the draughtboard.

It is time to go home.

I'm a writer, blogger and author of "The Wisdom Keeper", a heroes journey about the need to fall in love with earth again. I write about sensemaking, the revolution of money and self development

More stories from Lucien Lecarme and writers in Fiction and other communities.