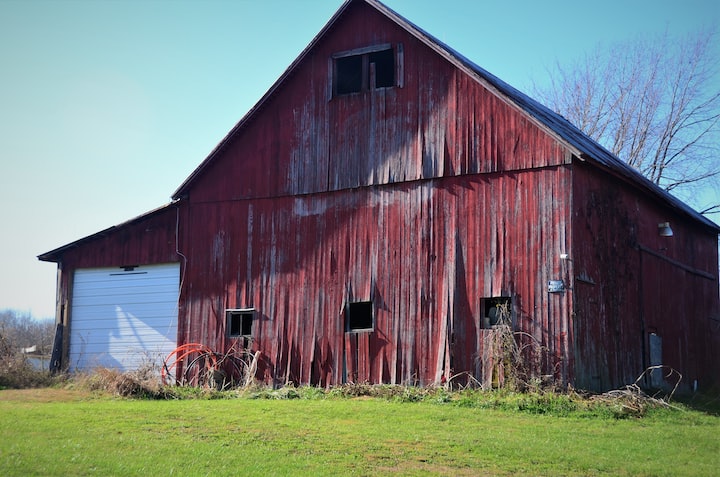 Nita groaned as the tiny hands of her little brother shook her arm.

His distressed whisper filled her ears. “Nita, wake up!”

For the first night in a month, Nita had finally been in a decent sleep, free of nightmares and mourning. Yet, now Joey had interrupted.

If he didn’t have a good excuse for waking her up, she would be mourning the loss of her little brother as well as her grandparents.

“And why in the world not?”

“Because there’s someone in the barn! I heard noises and it woke me up. And then, from my window, I can see somebody out by the barn!”

No. Nita immediately dismissed the possibility. That barn was so old and crumbling, only an idiot would break in, thinking there was anything valuable inside. All they were going to find was hay and horse hoofprints from where Posey used to be.

Nita creaked her eyes open just wide enough to roll them. “Nobody’s in that old barn, Joey. Not even a burglar. You’re imagining things.”

She already knew the answer to that though. Daddy worked long hours now that he’d moved them to their grandparents’ old farm. The place needed a lot of fixing up. He probably should have just sold it. But deep down, Daddy just didn’t want to lose his parents’ old farmhouse, now that they were both gone. Nita could tell Daddy still felt guilty for not bringing her and Joey to visit more frequently, when Grandpa Jake was still alive. In fact, Nita bet Joey hardly even remembered Grandpa Jake; he’d been so small the last time he’d seen him.

Even though Nita was nearly eleven, her own memory of her grandparents had grown fuzzy. So often, she tried to recall the last time she remembered both of them together. The family had been worried sick, waiting for Grandpa Jake to come back. He’d gone out in search of Grandma Rosie, who’d had a bad habit of escaping the house and getting lost. The Alzheimer’s had been to blame.

But Grandpa Jake had brought her back, safe and sound, like he always did. He’d been a little disappointed though, because that time, wherever Grandma Rosie had been, she’d lost the gold locket Grandpa had given her for their fortieth anniversary.

Nita rolled back over, hoping that if she ignored Joey, he would leave her alone and return to his own room. She let out a fake snore.

He shook her arm again. “You are not still sleep, Nita! Come on! Someone’s in the barn, I swear! What if they know where Posey is?”

Posey, the beautiful horse Grandpa Jake had gotten after Grandma Rosie died, had been the one bright spot about the old farm. She’d helped Grandpa Jake a lot after Grandma died, and everyone had adored that horse. But one night, she’d gotten out of the barn and had never returned.

Sometimes, Nita wondered if the horse had sensed Grandpa Jake was gone, and had either gone out looking for him, or simply decided there was no longer any reason for her to stick around. Either way, it had been heartbreaking to lose Posey. Nita had hoped and prayed every night for her to return, she had given up on that hope now.

“Nita, please. Just come to my room and see. If there’s no one out there, you can go back to sleep.”

Nita groaned into her pillow before tossing back the covers and sitting upright.

Joey immediately grabbed her hand and pulled her out of bed, hurriedly guiding her to his room. Their little footsteps echoed through the quiet house, but Daddy was such a sound sleeper, he wouldn’t hear a thing.

In Joey’s room, he led Nita straight to the window. “Look! See!”

Joey’s bedroom window provided a perfect view of the old barn, with its crumbling red paint. And there was indeed a figure by it.

“Stay here!” Nita hissed, and then hurried back to her room to slip on a pair of shoes.

She didn’t know what possessed her to sneak downstairs without alerting Daddy, but mere seconds later, she was tiptoeing out the back door, heading toward the barn.

The air outside was warm, and the moon was bright. But the stranger she’d seen from Joey’s window was no longer in sight.

Where had he disappeared to so quickly?

She was halfway across the yard when a voice hissed out at her.

“Nita, what are you doing?”

She halted and turned around. “I told you to stay in the house, Joey!”

“But I want to ask the man if he’s seen Posey.” Joey waddled toward Nita through the tall grasses, a look of determination on his tiny face.

Nita was so annoyed, she wanted to give him a good telling off, but the words never made it out of her throat when she heard the barn door creak.

“It’s Posey!” Joey said excitedly, and bounded ahead of Nita, rushing to the barn.

Nita’s heart practically sank to her toes, watching her baby brother get farther away from her. Her legs felt like they were made of led as she stumbled after him.

Joey reached the barn and began pulling the door open.

So many words went through Nita’s mind, like ‘stop’, ‘no’, and ‘be careful’. But none of them made it out of her mouth as Joey disappeared into the barn.

The instant the barn’s door was open, a cold wind seeped out despite the overall warmness of the night.

What had she been thinking, coming out here without waking Daddy? And why hadn’t she demanded Joey to go back inside the house?

As a matter of fact, they needed to go back inside. Right now.

But first, she had to get ahold of Joey.

Adrenaline coursing through her, Nita hurried forward and peered into the barn. She spotted her little brother standing in the middle of the floor, staring off to the corner.

Was someone inside, pointing a gun at Joey?

Was it a rabid dog, snarling and ready to attack?

Was it a bear? Did they have bears out here?

Whatever was wrong, Nita needed to reach in, grab Joey, run back to the house, and scream for help so that Daddy would know something was wrong.

Her mind set, Nita darted inside of the barn and seized Joey by his thin arm. But just as she was about to yank him backward, Nita too, froze.

“Do you see him, Nita? That man is glowing.” Joey pointed a shaky finger to the corner of the barn.

In the corner of the barn stood a tall thin man, with bald spot at the top of his head and white whiskers at his chin. He was wearing jean overalls, and his eyes were kind—smiling even, as he stroked the nose of a horse standing in front of him.

And Joey was right. The man was glowing…

It was like his skin was made of shimmery lights.

He turned his gaze toward the children. “Found her in her usual spot,” he said, his voice sounding far away despite him being right there in the barn with them. “Might want to check her hoof though. Front left one. Seems to have something stuck there.” And with that, the man nodded toward the kids with his grin still in place, and exited through the back of the barn.

“He found Posey!” Joey said, having no idea who the man had been. Maybe it was just too dark for the little boy to see properly. Or maybe he just couldn’t recall Grandpa Jake’s face very well.

Joey pointed to the horse’s left hoof. “But he was right. What’s that?”

Nita lowered her eyes, spotting something gold and sparkly at Posey’s front left hoof. Carefully, she approached the horse and knelt down.

The object wasn’t stuck in Posey’s hoof. It was wrapped around her hoof, rather.

Without coaxing, Posey lifted her hoof, allowing Nita to pull the locket off.

Her hands trembling, Nita popped it open, finding a picture of Grandma Rosie and Grandpa Jake inside. Grandma Rosie, just as beautiful as always, stared up at Nita from the tiny locket photo—her long black hair just as shiny and silky as Posey’s mane…

Nita clutched the piece of jewelry in her palm. Not until then did she realize Joey had left the barn already.

Stepping back out into the warm night, Nita spotted Joey. His little face was scrunched in confusion. “Where’d the old man go? We didn’t even get to say thank you for finding Posey.”

Nita wrapped an arm around Joey while still clutching the locket in her hand. “We can’t see him right now, but he’s still here.”