A Man Savors the Flavors of His Local Aquarium 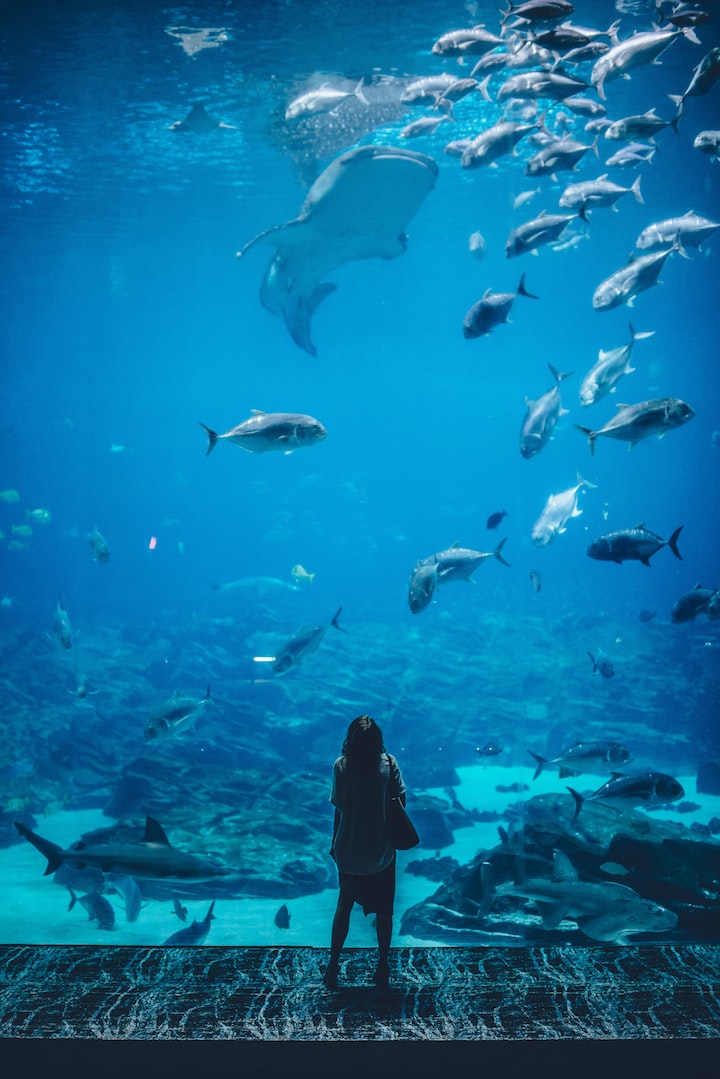 'Aquariums are just... living stews,' thinks Jason, watching the fish within the huge saltwater tank before him gather into a tight column. The action reminds him of the way a ladle stirs a stew pot, and the swirling liquid takes bits and pieces along for the ride. Except instead of a ladle spun by human hands, the vortex is a creation of the creatures themselves - their own movements. It is quite beautiful.

It still reminds him of stew.

When Jason's stomach starts growling, he wonders if the food-like comparison has any connection to his rumbling stomach.

Continuing along at an unbothered pace, Jason admires the many tanks and their inhabitants. Jason can't care less about what most of the animals are called: he can't be bothered to read any placards, refuses to pay attention to any of the guides showing the many classes of school kids around, and hasn't bothered to pick up any of the audio tours. He just wants to be there. See some fish. Watch them swim far more gracefully than he can.

Compare them to a living stew.

Jason chuckles to himself. Maybe he is just hungry. He's in no rush and plans to take all day if he wants at the aquarium, so he makes his way back to the main entrance area, which is where the (overpriced) food carts are. Anything he buys here will be marked up over five times the usual cost; the "price of convenience" as retail managers he knew liked to call it. He buys himself some nachos and a soda and sits down at a nearby table to eat.

'Knew I shoulda ate more than a bagel this mornin',' he thinks to himself as he reels from the cost of his nachos and drink. His distaste for the pricing is compounded when he finds the cheese is already cooling rapidly. He wonders if it had even been warm when he bought it. He wants to complain - to himself anyway. Instead he reminds himself that, while also a fun day out, this is supposed to be part of a mindfulness exercise his therapist had suggested. He tries a new thought.

'Oh well. It's still a nice day at the aquarium.'

He takes his time to scan the aquarium doors, debating which way he will go next after he finishes his... snack? The aquarium is divided into several sections, including freshwater and saltwater. He hadn't ventured far into the saltwater territory before stopping to eat, and there is a lot more to check out through that section.

His thoughts are interrupted however; a stray jalapeño has found its way into the back of his throat and he begins to cough. People start looking over at him, but he chuckles and waves it off.

"Jalapeño tried goin' down the wrong pipe! Sorry, folks!" The comment gets a few laughs and waves and, "Haven't we all been there?"s.

A few minutes later, after he's finished eating and washed off some stray nacho cheese, Jason heads back into the saltwater exhibit. First to greet him is the large saltwater crocodile basking under the exhibit lamps, eyes closed and mouth agape. Earlier the croc had been submerged in the water, but now Jason thinks he looks quite content.

'Basking in the sun does sound nice,' he thinks, nodding goodbye at the crocodile as he exits to the next section. Never mind the creature was basking - Jason didn't want to be rude.

Next, starfish and jellyfish tanks pop into view, colorful and ethereal respectively. The starfish aren't very lively though, and barely move in the ten minutes he watches them, but the jellyfish move elegantly. He admires the long tendrils flowing behind the gelatinous creatures. At first he considers the life of a jellyfish as a rather serene one, but then reminds himself of the harshness of movements within the oceans. It is only in such tanks that their lives are truly this serene. He goes on to consider how dull it might be to stay in such a tank devoid of any variation.

The jellies seem to be fine with it, though. Even when they bump into a neighbor.

Later on, Jason encounters one of the people who had laughed with him after his episode with the jalapeño. At first he doesn't see the man, but after they both witness a large fish try to swallow - and spit out - a smaller fish, the man chuckles and motions to Jason, "Looks like his day's going about the same as yours! Wrong pipe?"

The men laugh together for a few moments before going their own way in the exhibit. The other man heads to the outdoor section, housing large marine mammals, while Jason instead heads down below, into a section reserved for the dark-dwelling denizens of the abyssal deeps. Here, all the animals know is darkness and pressure. Lights are deceiving, often a lure a predator uses to snatch up its next meal. Still, Jason loves how many of the creatures emit their own lights in small bursts and mesmerizing patterns.

'If not for the dark, we'd never see their lights,' he muses.

Finishing up in the saltwater exhibit, Jason checks out the sharks and rays. As he watches one ray chase another - Jason presumes a male chasing a female - he hears a child lament about the lack of a particular apex predator.

"Mom! There's no great white!" he whines. Jason thinks to inform the child that no aquarium has ever successfully held a great white for long, but he bites his tongue and turns back to the sand tiger shark swimming slow in front of him, its ragged teeth jutting like broken glass. It's a beautifully dreadful sight, he determines.

Orca and sea lions tear through their respective tanks in the outdoor section, and Jason marvels at their sizes. The killer whales drench audience members walking close along the glass, eliciting screams and laughter.

Moving into the freshwater section, otters swim back and forth along their exhibit, placing their paws against the glass and chittering at guests. Jason says hello to one, waving as it swims by.

Frogs and amphibians greet him next, the humidity rising for the comfort of these mostly tropical residents. He takes a liking to one resting on a lily pad. It is missing one back leg, but any time another frog tries to displace it from the lily pad, it rebuffs the advancing competitor, sending them back into the tank.

"Ah, that's Big Bad Muffin! Ain't nobody givin' him any shit!" says an aquarium worker, though he is careful not to let any children overhear his language. "Big Muffin don't care; it's his lily pad."

"Yeah, he's a big pushover with the handlers. But when he's in the tank, he's boss," continues the handler with a grin of his own.

The rest of the freshwater aquarium is filled with just as many beautiful and intriguing creatures, and by the time he is tired enough to call the end of his trip to the aquarium, Jason is ravenous. Restaurants nearby begin their evening menus, and wafts of the scents arrive through the front doors.

Walking to the bus stop, Jason intends to return home to chew on his recent visit to the aquarium, thankful his therapist recommended it. As he walks by a particular restaurants' window, however, their sign for today's special gets his eye.

'Signature beef and barley stew', he reads, reaching into his pocket to see how much cash he has left. He's excited when he realizes he has just enough for a soup and salad combo. He hurries in and manages to get a seat quickly. Once comfortable and awaiting his order's arrival, he looks around the crowded eatery. After his day at the aquarium, he sees parallels between the worlds of the aquarium residents and humans.

Even just sitting at his table waiting, he witnesses an endless stream of customers coming and going; not unlike the come-and-go swimming of the large tanks of schooling saltwater fish. He suddenly recalls the old saying, "packed like sardines", reminding himself that humans, like sardines, school in huge numbers.

His order arrives, and he practically salivates over the delicious scent of the stew. He chuckles to himself again when he notices he really has had stew on the brain all day. But since the stew is piping hot, he decides to eat his salad first. It isn't bad, but the entire time he eats it, Jason can't help but anticipate that stew.

Finally, Jason moves onto his stew gratefully, savoring the melding of so many flavors and textures. The rich smokiness of it. The warmth. The chewy bits.

Just as Jason digs into his bowl of stew, he hears a man behind him struggling and coughing. A moment later, catching his breath, the man sheepishly says, "Sorry, everyone... Potato down the wrong pipe."