by Alyssia Balbi 2 months ago in Fable

A fable that explores the consequences of seeking freedom; freedom to some is prison to others. 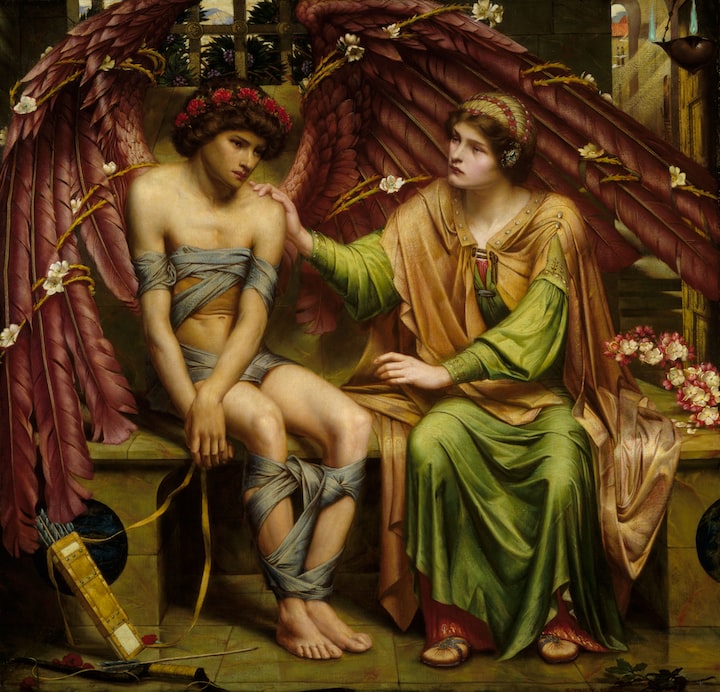 She was unnoticed. That was the way she wanted it stay. She seemed to blend in with the portraits on the walls. The people didn't know who she was, where she came from or why she was there. Her mind was a chained to deception bay, swimming in the bottomless sea of her manifested indecisiveness. She nursed the rim of her wine glass with her index finger, surfing the crowd with violet eyes. As though expecting to see a familiar face. She watched as the lost dancers wove webs in and out of each other, tangled in a net of one night stands.

She could smell lavender and mahogany floorboards. All around her men with cigarettes and liquor bottles bragged about the money they had made. The same money that they had wasted on the drinks that provoked them to grovel at the feet of the bar tender. The goals of drinking their graveyard days away distracted them from her feminine demeanour, which she covered with blue velvet. Her hair was done up, adorned with pearls and marigolds; she should have been undeniable to them, but they were too drunk to notice her.

She fiddled with her right earring, thinking of the cosmic flaw that drew her to places like this. The only man she had ever loved told her that it was her impulsive individuality that attracted her to places that needed a certain darkness for the stars to be seen. But she was too different from the sepia world that she lived in for him to stay. He made her feel trapped under a sheet of ice, drowning and encumbranced under a frozen lake. Eventually his dreams too were crushed into a dust of a million stars, and he became dull, so she left. Leaving him to cry at the alter with an empty white dress that had hung in her closet next to her skeletons. Skeletons of a child that he had dreamed of but she could not love.

She had embraced the endless earth and had become obsessed with discovering endless roads. She had a chameleon soul, no real compass pointing her due north.

She had learnt how to listen. She could hear them jumping between broken syllables, using swings of their drinks as disjunction to their dead sonnets. The people that populated her country spoke like drunken poets. They mumbled eloquent insanities, and she wished dearly to laugh, but her fear of being noticed had sewn her lips together long ago.

My daddy works a lot. He comes home dusty. He spends green money on green bottles. That’s why I don’t have any shoes. When I told him that my shoes had broken, I got a bruise on my arm. Daddy gives me bruises when he has had too much water from the bottles. Once a year he stays in his room all day. I try to stay away from the door, because I can hear him crying. Daddy’s aren't meant to cry.

I’m only six, I should be crying.

Once, on one of these days, I cut myself on one of the smashed bottles in the kitchen. I needed Daddy’s help. I looked through the key hole and saw him dancing with an empty white dress.

I think he’s lonely. He hasn’t been the same since Mummy disappeared.

Daddy said that she might as well be dead. I don’t think he is telling the truth. Daddy’s are always meant to tell the truth. Daddy always goes to the bar at night. I think he goes there to see Mummy. I can’t remember what she looks like. When Daddy leaves me alone, I let out all of my bad feelings into a dirty pillow. Daddy doesn't do the washing. Sometimes I think that if I scream loud enough Mummy might hear me. One day, I’ll follow him, and get to see Mummy myself. I wonder if he tells Mummy that he loves her. Daddy doesn't tell me that he loves me, but I know that he does because he warms my beans up in the can and gives them to me for breakfast and dinner. That’s how I know he loves me.

She felt a gentle tug on her dress, there was a child; blue velvet was not meant for the hands of children. His hair was blonde, like her’s used to be before she tinted it with chemicals. He was like her, no one noticed him. She wondered how long it would be until his baby soft skin turned into leather. His feet were dusty, but his eyes glistened with the innocents that she had long lost. He was begging for coins, spare change, food...She had no space change, so she took a marigold out of her hair and gave it to the boy.

“Do you know where my Mummy is?” His voice was quiet, almost a whisper. His lips brought back memories of hospital beds and a baby crying.

She shook her head. “Go home. This place has a heart as black as the ace of hearts.” She pushed him gently towards the door, praying that he did not recognise her.

She was a girl who grew up counting the cracks in the wall as her mother sold herself for money to pay for rent. She knew nothing of love. When she first held him the love that she felt terrified her to the point where she couldn't breathe. She could not love.

That was why she left him in the cradle.