by Em Keeler 2 months ago in Sci Fi

Where Did You Go? 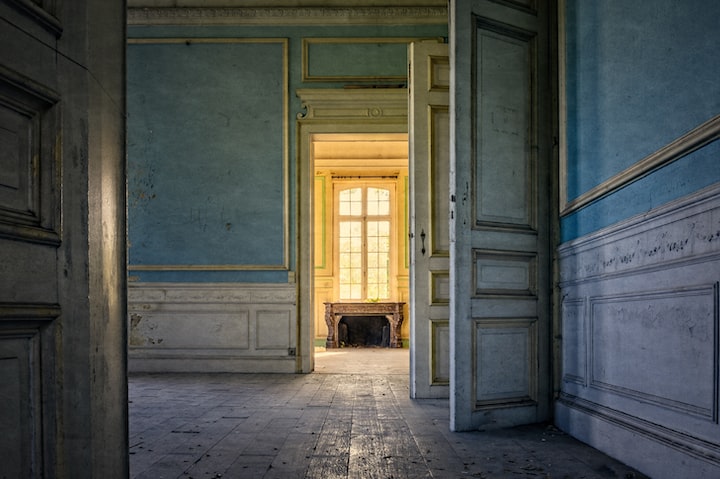 Photo by Peter Herrmann on Unsplash

The tiles on the ceiling are dark and water-stained.

Alex looks at me, “Where did you go?”

He rolls his eyes and sits down at the end of the couch. He pulls my boots onto his lap and squeezes my calf, gently. His fingers feel like warm reminders of home.

Spring air falls through our window with the weight of crab apples tumbling off branches.

New earth smells like the revelation of old secrets.

The stucco ceiling twists in front of me, seamless and splotchy. Pink walls bubble, like bottles of Pepto-Bismal. They turn into shag carpet the color of cream.

The coffee table will break under my small weight. It is the kind that is made with heavy wood and thick glass - the kind of glass that could be mistaken for one of those church windows. I am looking up at the lip of that table, so far off the ground - it is so beautiful, I want to go up and rest my cheek against it.

The house is so loud. Lynn is loud. The other children are loud.

But that place in the glass - it is so quiet.

Lynn’s voice scratches the pane, “Sofie - what are you doing? Don’t touch that.”

Her fingernails hurt when she takes me by the arm - I cannot find the Sunday School teacher that smiles down on me during those weekly afternoons that are meant to be so holy. On the days that aren’t Sunday, she seems to vanish.

The closet door is a black slate as it closes me off from that glass mirage, that fleeting moment of nirvana.

There is no nirvana, here.

The sky is so bright it hurts my eyes.

My laughter parts the clouds.

Zach looks at me in awe, “You’re the most beautiful thing when you’re on drugs.”

He laughs, “That acid smile.”

He tells me that I’m crazy, even though, we both slipped the tab.

He tells me about moths.

He tells me that when moths are larvae they eat everything in their path. For 2-30 months, the larvae eat and eat until they cocoon and hatch as those papery-winged Lepidoptera.

Zach says that when the larvae become moths they lose their mouths. They die 45 days after they are reborn.

He says that the moth’s only purpose is to consume, then die.

He tells me of the way he would watch as their wings melted against candles. This thing that could be beautiful in another life - he said he felt powerful, watching it perish.

He doesn’t care about the larvae’s survival; it is only the moth he wishes to watch burn.

I wonder if I will live longer than 45 days if I stay here.

Alex’s hands are warm against my leg. The heat tethers me beside him for a moment, tethers me to the faded couch in the dingy room we’re squatting in.

I don’t want to think about this.

Alex bends down and forces me to meet his eyes. He asks, “You good?”

He squeezes my leg one more time before pushing my boots off his lap, “Alright.”

I stand up and we keep going.

We don’t bother to close the door as we leave.

He fishes something out of his pocket and tosses it my way, “Here. I found this under the couch.”

I catch the brassy locket. It’s thin and unremarkable, old and faded. The lock doesn’t open but its cool surface makes me think of stony shores and lapping waves.

Moss covers the dark rocks. The water is so dark it looks black in some places, that particular nuance of navy. I want to dip my head under it, to feel the cold rush shock me back into my body. I want the relief of being submerged.

I shove the locket into my own tight pants’ pocket. I don’t trust the lobster-clasp to keep grip - I must tuck it away somewhere else. I can’t let myself try to figure out how to open this heart-shaped thing, yet - I must only keep it close and keep moving.

Alex’s fingers take the place of the locket. His thumb strokes the top of my hand, “We’re almost there.”

He’s right. We’ve been moving for so long, I forgot where we’re going.

My legs ache against the summer heat. I can feel the fiery pavement melt the rubber soles of my sneakers; the flames lick at the bottoms of my feet as we push ourselves up the concrete hill.

I haven’t seen the color green in a long time.

Alex squeezes my hand. He speaks slowly, as if dreaming out loud, “There are others, over there, apparently. And there’s a house with a backyard - Kris even said there’s a dog.”

I look down, “It barely sounds real.”

“We aren’t going to get there if you don’t even believe in it.”

“That doesn’t mean that home doesn’t exist. We’ll find it.”

He continues, “They can’t take everything good in the world and leave us with nothing but trauma.”

When the door finally opens there are men in suits. They apologize for things I don’t understand and motion for me to stand up. As if the opening of a single door means the instant resurgence of strength. As if the artificial light from the hallway doesn’t burn after being cramped in the dark for so long.

When my legs shake, the men give me medicine. They tell me I need to get back to school, that this medicine will help me function. They don’t ask about the closet or the house - there isn’t enough time to listen.

But they smile and give me medicine and tell me that it will all be ok.

They don’t tell me about the price of that medicine.

They don’t tell me that it will all be gone soon.

When the medicine runs out, the memories return and I start to shake again.

I have been shaking so hard, I can barely move.

No one waits except for Alex.

And something about that simple fact gives me the strength to move again.

I turn to him, “How can you remain so sure?”

He smiles. He takes his hand from mine and holds it towards me, palm up, “Give me that locket.”

I frown, but give it to him, anyway. I sigh, “I can’t get it open. It’s really beautiful, though…”

He brings the locket to his lips and pries its walls open with his canine tooth. He smiles, “You gotta sharpen your teeth.”

I look down and pause.

Alex says, “You asked me how I know it’s still out there - life, greenery, home, hope, whatever.”

He points in the locket, “That’s how.”

When I look down, there is no photo in the locket. There is no keepsake or long-forgotten letter. There is only the smallest heart-shaped mirror.

I look into it and for the first time in over a year, I see it:

See all posts by Em Keeler →