by Elissa Dawson 10 months ago in Short Story

Time to face her deepest fears 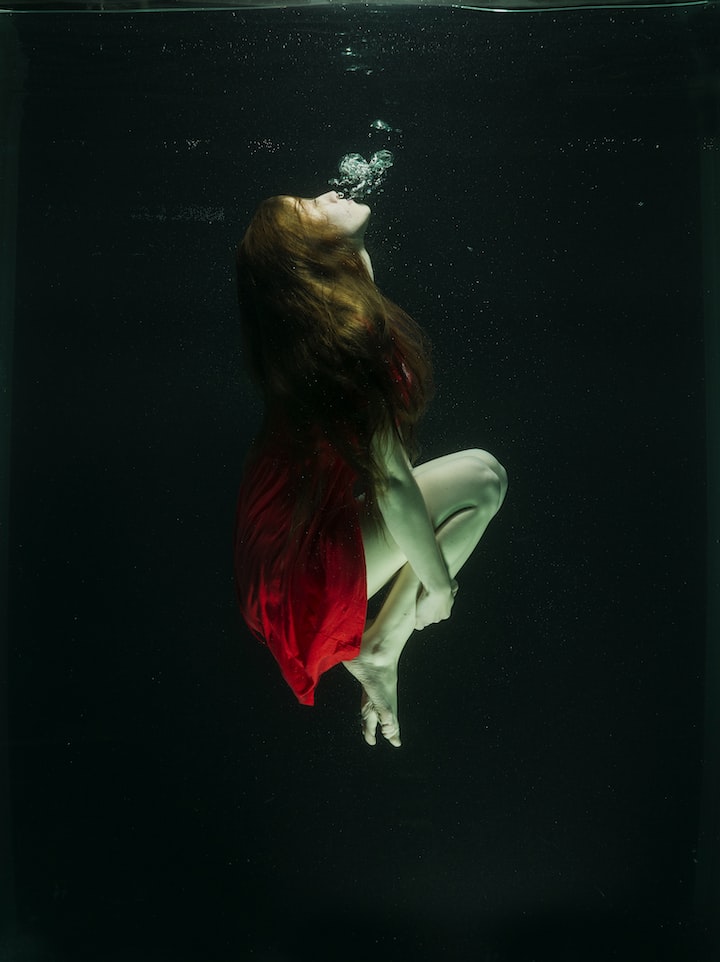 Olive plunged down deep into the water and felt a fizz of bubbles, the ocean rushing up the meet her. Panic rose in her chest. She flailed her arms and legs, trying to steady herself and she fought the desperate urge to breathe.

“Relax!” came a voice inside her head. She stilled her body and floated, suspended for a moment, trying to find calm.

Then there it was, the dark shape in the distance slowly drifting towards her. She could sense it closing in. She turned and started to swim away but she wasn’t fast enough. It was right behind her, so close, all she could do was bring her hands to cover her head and brace.

Olive bolted upright in her bed, her heart thumping and her body drenched in sweat. She breathed furiously and closed her eyes again, trying to regain her composure. It was the regular dream; the one that had haunted her since childhood, recurring so often it had become a part of her personality. She couldn’t remember when she had first had it, maybe she had watched Jaws or something she shouldn’t have, but whatever it was had left an impression that had lasted a lifetime. An impression of the ocean being a dark, dangerous place where she was being hunted. She was the prey.

“Not for much longer,” she said out loud to her empty hotel room. Olive had worked with a psychotherapist for the past year following the failure of another semi-serious relationship, destroyed ultimately by her night terrors. She had taken diving lessons at her local centre, researched the best places in the world to dive in the ocean with sharks and eventually found a boat that took intermediate divers out to the famous Cocos island in Costa Rica. She’d landed at Juan Santamaria international yesterday, her heart full of trepidation for what lay ahead.

Olive hauled herself out of bed and swept open the flimsy panels covering the window. The sea view was spectacular at this time of the morning. She was tempted just to spend the ten days here, enjoying paradise, but she’d come so far and invested so much, she had to finish this.

She had a few hours to kill before the boat departed, so she threw on some shorts and a vest and made her way down to the beach right opposite the hotel. She sat on the sand and stared out to sea.

“Couldn’t sleep either huh?” A drawling female voice came from behind her. Olive turned to see a woman of around 70, sitting on a rock and dragging heavily on a cigarette. The white flecks in her hair contrasted sharply with her dark, leathery skin. She proffered the cigarette in her hand Olive’s direction, but Olive shook her head.

“No thank you. I haven’t touched one in years. They used to calm my nerves but they don’t do anything for me now.”

“Ha!” the older woman exclaimed, “Must be a big old problem! What is it? Man trouble? Woman trouble? I’m Barbara by the way.” She held up her hand in a wave.

“Olive,” she introduced herself, “No, neither! The chance would be a fine thing. I have night terrors, which just freak out anyone I ever get remotely close to. It’s impossible to have a relationship with someone when you’re crying out and scaring them half to death at night.”

“Wheew! That does sound tough! Have you been having the terrors long?” Barbara dragged furiously on her cigarette again.

“All my life,” Olive replied, “Well as long as I can remember. It’s why I’m here, facing my fears. In my dreams I’m being hunted by a huge black shape, a shark I think, drifting towards me underwater. So I need to prove to myself that it’s just a dream and go be in the water with them. I’m setting off this afternoon, to go dive with the scalloped hammerheads off Cocos Island.”

“Good luck with that!” huffed Barbara, sending a cloud of smoke up into the air. “The seas around the island used to be famous for them, but those poor sea-pups have been fished half to extinction now. You’ll be lucky to find many of them, even with the best captain guiding your ship.”

“Ha! Officially they are, it’s meant to be a ‘conservation area’, but those illegal fishing boats have been coming in for years with baited lines thirty to forty miles long and fished the ocean dry. My Roberto used to speak up and try to stop them, but he failed and it drove him to an early grave. Nobody stops them anymore, so they just carry on. It’s greed. They put money over nature every day of the week. Hell they put money over everything. They don’t realise one day they’re going to wake up and take the last damn shark out of the water. Then the whole marine ecosystem will crumble.”

Olive was stunned by Barbara’s outburst. When the old woman held out the cigarette again, this time Olive took it, inhaling deeply.

“That’s so sad.” she responded. It was a shocking suggestion but most likely the old woman was exaggerating; people wouldn’t let it get that bad would they? Someone would do something.

Noticing her furrowed brow, Barbara said in a cheerier voice, “Aw ignore me! I’m just a crabbit old woman! Don’t let me spoil your trip. Let’s hope you get to see a shark or two and confront those fears!” She pulled herself to her feet and dusted the sand off her legs. “They really are gentle creatures you know. They don’t have the fame of sea turtles or dolphins, but they are miracles in their own right and we’re not part of their natural food chain.”

Olive nodded with a troubled smile, “Nice to have met you Barbara.”

Two days later, Olive stood on the deck of the Sea Shark checking her diving gear. The journey to the island had been enjoyable, she’d learned a lot about the local marine ecosystem and she’d even enjoyed making some new acquaintances over dinner. Matt, one of those acquaintances, was to accompany her into the water today as her diving buddy. He tapped her gas cylinder now as he walked by. “You good to go?” he asked with a smile.

“As I’ll ever be.” Olive added biting her inner lip.

The plunge into the water was eerily similar to her dreams. The echoing clunks of the equipment moving underwater, such a familiar, anxiety-inducing sound that she forgot she was in control for a moment and flailed around.

“Relax.” That old voice inside her head again. She opened her eyes to see Matt just ahead of her, holding up his thumb. She steadied herself and raised her thumb back.

Anticipating the worst, she took a few minutes to start to relax and take in the amazing sights. They dived past vertical granite shafts, volcanic pinnacles and the natural underwater arch Dos Amigos Grande. Olive’s heart skipped a beat when a beautiful leatherback turtle swam by close enough to touch and she smiled in awe as she spotted a guitarfish gliding gracefully along the sea bed.

Then, in the distance, she spotted the distinctive form of a scalloped hammerhead. Tapping Matt’s leg and pointing, they swam off in that direction. Every sense in Olive’s body tingled as they got closer and it took every ounce of her self-control to override the flight instinct kicking in.

The shark swum towards them now, then another appeared right behind it. Olive stalled, frozen by fear and raised her hands to her face in the familiar brace position of her dreams. Then... nothing. She opened her eyes to see the sharks swimming straight past, preoccupied in their hunt for food.

"Ha!" She laughed in her head and gave Matt a huge beaming grin. They swam on further and became aware of the ocean getting deeper, the sea bed falling away. Olive spotted a dark shape floating motionless in the distance and went nearer to explore. She didn’t understand what she was looking at to begin with, but slowly the realisation hit that this was another hammerhead shark, almost lifeless, hooked by a fishing line that went on as far as she could see in both directions. Other dark shapes were visible along the line, some moving, some still. She beckoned Matt over and putting fear aside, they worked quickly to free the injured creature. The shark listed for a few moments, not doing anything and then began to flip its tail and manoeuvre away.

Olive started to make her way along the nets. Matt tried to gesture at her to come back, they were way too far from the boat and they needed to return, but Olive was overcome with the sudden urge to see this for herself. There were fish on the line, but she also passed sea birds, green turtles, even a reef shark, all dead or dying. She felt sick to her stomach, but she carried on. She didn’t know where she was going or what she was going to do. She swam with all her strength along the nets, trying to free any creature that wasn’t already dead. Matt had followed her and was frantically pointing back towards the boat.

Then she sensed it. The dark shadow of her night terrors. It was here. She turned around to face it, not shielding her face this time and as it came into focus, she realised what it was for the first time. Not a shark, but the hull of a huge fishing boat, dragging lines in the water behind it. The real monsters of the sea, heading straight towards her.

She faced the hull head on, frozen in the parallel existence of her dream and reality, not knowing what to do. A hand from behind dragged her backwards sharply and she let herself be pulled to safety by Matt.

No, she wouldn’t die, not today. She’d faced her deepest fears and now understood what her night terrors had been trying to tell her all along. She would go back to the boat and her work would begin.

Now it was her time to fight back.

If you would like to add your voice to the petition to stop the killing of endangered sharks in Costa Rica, please sign here.

Thank you for reading! If you enjoyed this piece, more of my short stories can be found here.

More stories from Elissa Dawson and writers in Fiction and other communities.