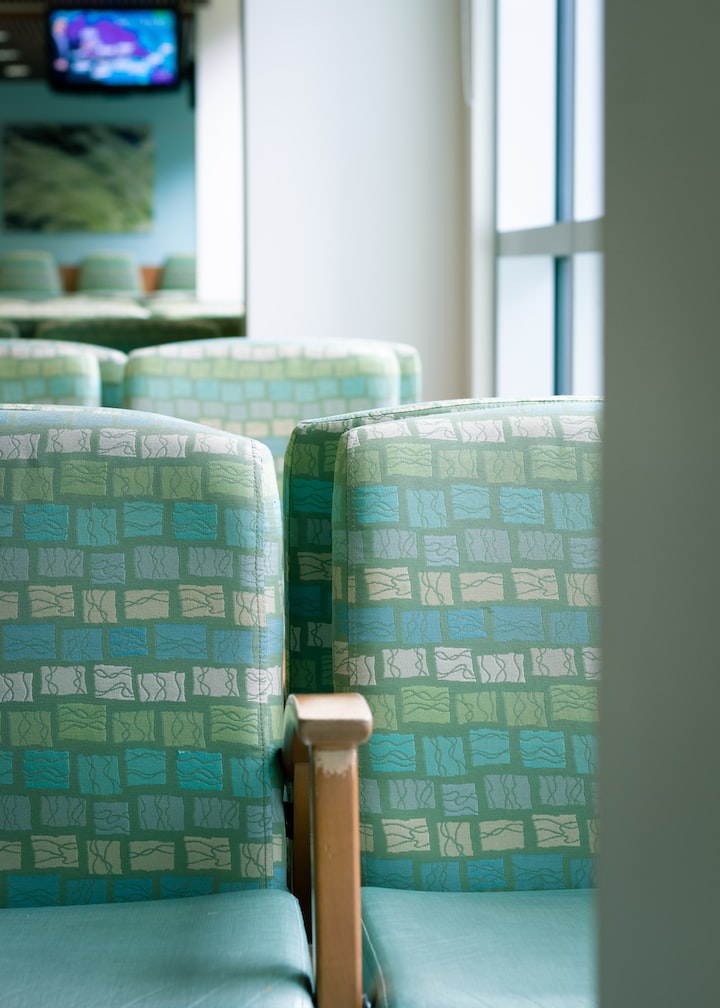 The hospital waiting room is empty save for one man asleep in the corner. Above him, a TV is playing BBC News with the sound muted. I sit down and try to figure out my next move. I didn’t get much from meeting Brent, aside from a somewhat uneasy feeling. On the screen, a tank moves across a desert landscape. Then the picture switches to video of the Australian Prime Minister meeting with the Chancellor of Germany. I wouldn’t have known who they were if it weren’t for the titles on the screen. I’ve always been amazed with how much more in-tune the rest of the world is with other parts of the world. The show then turns to U.S. news. That morning, tornados had touched down in Arkansas and Missouri, killing seven people, injuring others, and destroying homes. I see my own life reflected in the pictures of the aftermath.

I close my eyes and try to think past my growing headache. When I open my eyes again, there is a new scene of war on the screen. No longer in a desert stretch of sand, but an urban setting with lots of crumbling buildings. Soldiers, tanks, fleeing civilians. Brent’s voice plays in my head. “Kind of a smaller company. Trying to expand into the Canadian market.” Was it a defense company? I hadn’t wanted to push, but it was possible. Was Brent working with Tucker? Had they planned something outside of building a new headquarters?

I pull out my phone and look up Tucker’s company. I have always just called Tucker’s cell phone when I needed to get ahold of him, so I don’t have the office’s phone number in my contacts. I open the website and click on the ‘About Us’ tab. At the top of the page will be Tucker’s beaming face next to his bio. It lists education, career highlights, awards, and past projects. I scanned this page over and over when we first started dating, trying to learn all I could about the new man in my life. And I’ve heard his rundown of qualifications so many times over the years I could have listed it all in my sleep. But when the page loads, there is no Tucker. All I see are the pictures and bios of his two partners. Alex Hernandez and Mitch Olsen.

I have met both Alex and Mitch several times since being with Tucker. Both of them and their wives were at our wedding and we’ve spent a lot of holidays together. Alex and Tucker could be brothers. Both with dark hair and chiseled facial features. The only difference being that Alex is about a foot shorter than Tucker and maintains a much more laid-back demeanor outside of the office. Mitch is the odd one out in the appearance department. With strawberry-blonde hair and blue eyes, he looks like the innocent friend that the other two have brought along to charm someone’s mother. But looks are definitely deceiving. All three of these men are sharks. They met as fraternity brothers and had already planned out their future business before they graduated. But where is Tucker’s information? I try to remember the last time I visited the website. It’s been a while. Who knows how long he’s been absent from there. I can’t believe he would have left the company. It was his life’s work. But who knows anymore? Has he disappeared completely?

At the bottom of the page is the company’s contact information. There are too many questions piling up in my head and I need to start getting some answers. Hopefully someone at the office knows something. I click on the phone number. It rings three times before the secretary picks up.

“Freedom Strategies, this is Heather. How may I help you?” Heather. I hadn’t met this one yet. It seemed like the company had a new secretary every few months. The last one, Noah, I liked. He had stayed on for a while. He always asked how I was doing whenever I visited and seemed genuinely interested in my life outside of just being Tucker’s wife. And when I was pregnant with Millie, he sent Tucker home with a small pink sweater that his own mother had knit just for our little girl. But he was just working there until something better came along. And apparently it had. Noah is gone and now we have Heather.

“Hi Heather, this is August Logan.” I wait for a hint of recognition. There is a longer than typical pause. I follow up with, “Tucker’s wife.”

“Okay,” she says, reacting to my statement as one of fact rather than a connection to someone she knows. But she doesn’t seem to think it’s strange that I’m calling. No worry or question about Tucker not being in the office. I’m not sure whether this is a good or bad sign. Maybe she just thinks he’s still on vacation. “How may I direct your call?” she asks. It feels strange to be treated like just a random person calling the office and not the wife of one of the company’s partners. Something is off. Something is wrong. I try to silence my worries and focus on the call, but Tucker’s absence from the website no longer seems to be a mistake.

“Is Alex in?” I say, picking one at random. Either will do, really.

“Actually, Alex is out today.”

“That’s okay. How about Mitch? Is he available?”

“Yeah, he’s here. Let me see if he’s free.” She puts me on hold and there is a brief, staticky silence before Mitch picks up.

“Hi Mitch. This is August.”

“August?” He genuinely sounds like he doesn’t know who I am.

“Oh! August. Wow. Um, how are you?” He seems completely surprised to be hearing from me.

“Um, okay.” I’m still trying to figure out how to play this.

“Good to hear. How were the holidays?”

“Oh, you know. Family drama with the in-laws. Ali’s mother wanted to bring her new boyfriend to Christmas dinner, but Ali’s brother refused to come if the guy was there. Fun times. But other than that, decent. How have you been? I’ve been meaning to call. Are you okay?” Am I okay? Has he talked to Tucker? What does he know?

“I’m fine. Well, actually, no. Not really. That’s kind of the reason I called. Have you talked to Tucker recently?”

“I mean have you heard from him?” There is a long pause. “Mitch?”

“August, what are you talking about?”

“It’s just, I need to speak with him and your secretary said he wasn’t in today so I was hoping you could tell me where he is.”

“Look, is this really August? Or is this some kind of sick joke?”

“What? Mitch? This is August, I’m looking for Tucker.”

“Yeah, sure it is. I don’t know who you are or what you’re doing, but I really don’t appreciate this. Don’t call here again.” The call cuts off and I am left with nothing but the low hum of the florescent light above me. What the hell is going on?

I now find myself with more questions than before and a sickness building in my gut. The man sleeping beneath the TV has woken up and is eating a granola bar he pulled from his pocket, staring at me while chewing. It’s time to go. I’ll decide my next moves on the way back to the motel.

I take a taxi back into town, but I have the driver drop me at the grocery store. My room is running low on sustenance. I wander up and down the aisles, tossing a few things in the handcart before checking out and walking back towards the motel. I really don’t know where to go from here. I decide I should probably talk to the police again. Let them know about my suspicions of Brent Howard and the idea that someone might be following me. The thought of this makes me quickly scan my surroundings, just to check.

And then there is this situation with Mitch. He seemed really upset. Had Tucker done something to him? To the company? Would he have left Freedom Strategies? That business was his world. And why wouldn’t he have told me anything about it? That seems like a move you would discuss with your wife. And if he did leave, what has he been doing the past few months?

A car slows down behind me. I can hear the engine crawling along. But when I glance over my shoulder, it picks up speed again and turns the corner. Yes. I definitely need to talk to the police. I go straight to my room and call Detective Singh.

Hi there! Thank you so much for reading my story. If you liked it, go ahead and click on that little heart button below. And if you really liked, and are feeling a bit generous, a tip is always appreciated. Help me keep writing things for you to enjoy reading.

More stories from Megan Clancy and writers in Fiction and other communities.