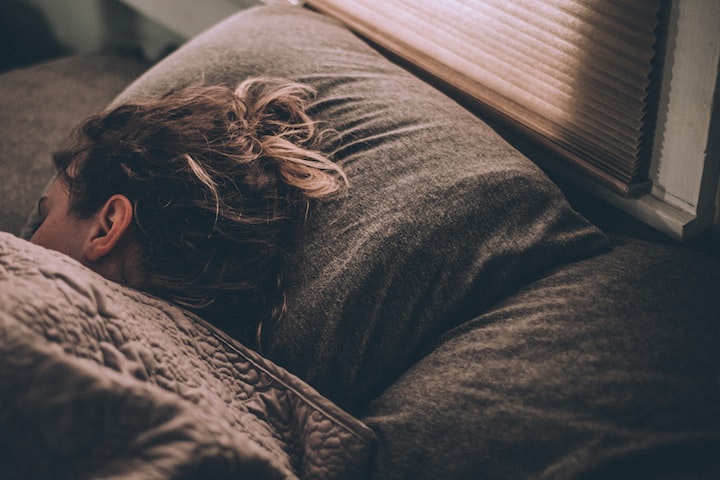 Photo by Gregory Pappas on Unsplash

They are gone. My husband is gone and he took my daughter. He left me and took her with him. He took her. He took her. I am repeating it over and over and apparently not just in my head. I can hear my voice echoing in the room as Ruth walks me to one of the chairs by the window, trying to calm me.

“Shhh, dear. We’ll figure this all out. I’m sure it’s just a misunderstanding,” she says, attempting sincerity but not too convincingly. This, Tucker leaving me, taking Millie, is suddenly my biggest fear realized. Until this point, I hadn’t even considered that it was a possibility, but now that it’s happened, I know that this is what I have always dreaded. The one person who I trusted beyond compare has not only left me and broken my heart, but he’s taken the one thing that means more to me than anything else in this world.

She’s better off without you.

I had told myself not to rush in, that relationships were not to be trusted. But something just felt right with Tucker. Nothing about it had been rational. That should have been my red flag. But I trusted Tucker. More than any other person I had ever met, I knew he was the one I could be with. Then we got married and we had Millie and deep down I believed that this made our bond permanent. But why? Hadn’t that been the exact bond that my parents had? The exact bond that was torn apart and the exact bond that I was certain I never needed in my life? I am now the mother that has been torn from my daughter’s life. The mother I had always feared I would be.

This is all your fault.

My mother died when I was just four years old. A car accident caused by a drunk driver. Her. It was her choice to leave us, I came to believe. A belief only further established by my father’s underlying anger towards her. He never talked about it, but I knew the truth. It was her choice to have those drinks. Her choice to get into the car. Her choice to drive the wrong way down the highway until slamming into an oncoming semi-truck. I learned this last bit by searching through newspaper archives at the library when I was twelve. But at four, all I knew was that my mom was gone and my dad was sad. My dad never wanted to talk about it, but I knew why she did what she did. My mother hadn’t wanted me. She didn’t love me enough. That’s why she left.

From the moment I found out I was pregnant, I was determined to be everything my mother hadn’t been. But the closer I got to my due date, the more panicked I became at my lack of role model in the area of motherhood, and the more I worried that I would become exactly what my mother had been. I started off not really even wanting children. I wasn’t sure whether a child would fit into the life I had imagined for myself. The life Tucker and I had begun to build together. But as the pregnancy progressed, I had become terrified over the distance I already felt from the child growing inside me. What if I couldn’t love her the way she should be loved. We found out early on that we were having a girl. Tucker was elated. My anxiety was further heightened by the pressure I felt in raising a daughter.

“I just don’t think I’m meant to be a mom,” I told Tucker one night over Chinese take-out. I was crying into a pile of fried rice and crispy sesame chicken on the plate that was balanced on my round belly. It was the second time I had cried that night. Earlier, on the phone with the restaurant, I had a complete break-down over the decision between beef and chicken. But these tears were even more panicked. “I can’t do it. I’m not mother material.” Tucker had promised it would be okay. He would always be there for our child. Now, he’s taken her.

“Deep breaths, dear. Deep breaths.” Ruth’s voice weaves through my thoughts. “Maybe he will be here shortly. Just went off on an errand or something.” No. I know there is no other explanation. They have not just gone out to run an errand or to take a drive in the car. Besides, I have the car. Where has he gone without the car? They will not be returning in the next few minutes. He has packed everything up and left, with no intention of ever having me join them. I feel the room start to spin around me. This chair feels like it is dropping away and I grip the arm rests in an attempt to stabilize not only myself but my entire life. It is all slipping away. Ruth’s voice is pulled into a long, narrow void and then everything goes black.

I wake to find myself lying on the bed. How long have I been out and how did I get up here? Ruth is sitting beside me, stroking my head and I am immediately certain that this old woman actually carried me to the bed herself.

“Just rest here for a bit,” she says. “I’ll be right back with some water for you.” I don’t think I could move even if I wanted to. I feel frozen, locked into the horrific reality that hits me again. My child has been taken from me. And it is my husband who took her.

In my numbness, I am hesitant to call the police. I want there to be an explanation. Anything other than what I think has happened. Tucker wouldn’t have just left. But I know these are just lies I am telling myself to put off the inevitable. Ruth, however, is not as interested in fooling herself. Too much time has passed for her liking. Her favor for Tucker has disappeared completely and she is at the ready to come to my rescue.

“I will call the police, get them over here right away.” I sit up to take a sip from the glass of water she brought me while Ruth bustles around, getting me a blanket and making sure I am comfortable. With one motherly touch of her hand on my shoulder, I feel all resistance and strength wiped from my body. I just want to collapse into the well of tears that I know are coming. She sees I am about to break. “You just lie here and we’ll get this all figured out.” All I can do is nod.

I have not led a life that has had much interaction with the police. My last memory of them was as a four-year-old, dressed in my pajamas, face pressed to the stair banisters, waiting for my mom to come home. She had left after an argument with Dad earlier that afternoon, but she should have been home by then. Dad was in the den, the sound of Miami Vice floating through the downstairs, when the doorbell rang. “Forgot her keys again,” I heard Dad say as he pulled himself out of his La-Z-Boy recliner and headed toward the door. But it wasn’t who we both hoped it was. When Dad opened the door, the spinning red and blue lights entered our house before the sound of the cop’s voice. “Mr. Daniels?”

I don’t remember much more about that night. Our neighbor, Mrs. Granger, had come over while Dad went with the police. She sat on the edge of my bed and read story after story, but I wouldn’t go to sleep. I couldn’t. Not until I had answers to my questions. Mainly, where was my mom? But Mrs. Granger wouldn’t answer them. She just told me my father would explain everything to me when he got home. I learned early on that this is what adults did, pass the responsibility of truth-telling off to other adults. But the rest of my life had been pretty far removed from the presence of the police.

Briefly, something else plays in the back of my mind. A more recent memory. A foggy one that disappears before I can catch it. There was another time, but I can’t remember. The police were there, and my life was once again altered. Destroyed. And then, it’s gone. Beyond that, though, I was certain I had built a life that kept me pretty well separated from the police. But just as before, when I least expect it, they are suddenly thrust back into my world. And so, as I did on that first night, lost and begging for answers, I cry.

Hi there! Thank you so much for reading my story. If you liked it, go ahead and click on that little heart button below. And if you really liked, and are feeling a bit generous, a tip is always appreciated. Help me keep writing things for you to enjoy reading.

Receive stories by Megan Clancy in your feed
Megan Clancy
Read next: Just Let Me Die Here (A Serialized Novel) 19