by Benny Shlesinger 10 months ago in Short Story
Report Story 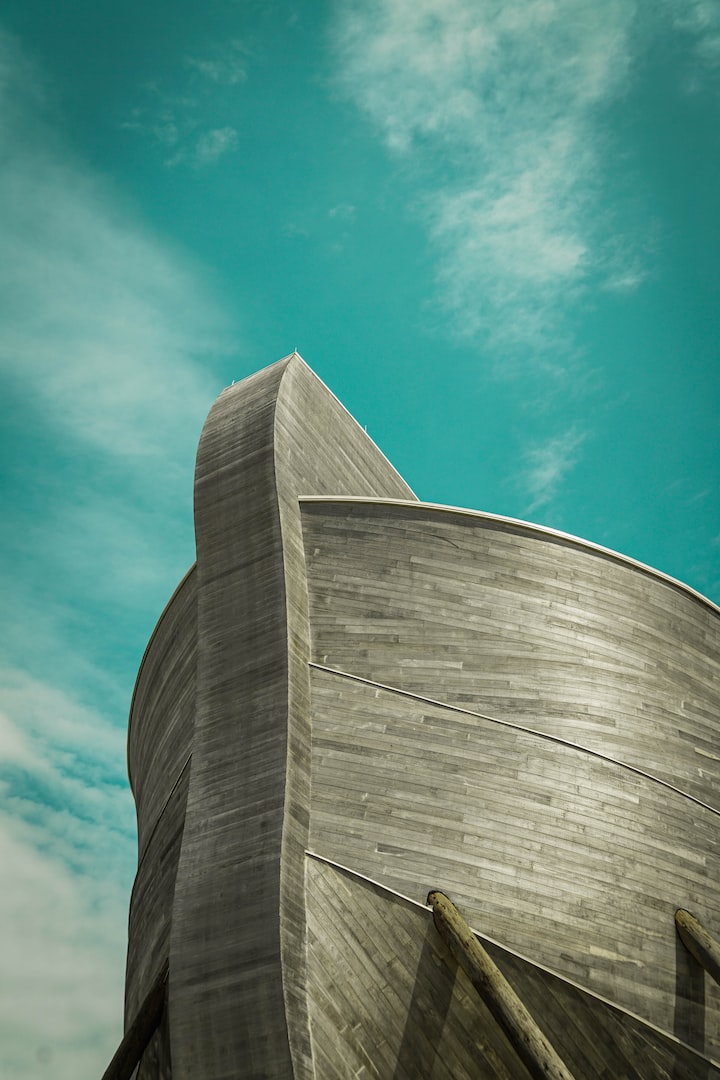 Photo by Lucas Dial on Unsplash

Jeffrey stood in the back, hiding behind the other members of the crew. While they waited for Noah to arrive, Jeffrey daydreamed about which group of animals he might be assigned to care for. He’d watched in eager anticipation as two by two they walked up the ramp into the massive ark.

Despite the flood, Jeffrey smiled to himself. He was at peace, selected to be part of the next generation, a pillar on which the next phase of history would be built.

Other crew members muttered bitterly amongst themselves. Most commonly, they complained of the poor living conditions: small, windowless cabins that had been built deep within the hull. They’d needed to prioritize windowed real estate, Noah had explained, for animals that needed more airflow.

“Apparently, we regular old people don’t deserve air!” Complained Crew Leader. She wore a scowl and there was a rather prickling whine ever-present in her voice. “We have to take care of the whole zoo so God can have his animals, but we don’t even get some Goddamn windows?!”

The crew leader looked up for the source of the voice. Like a sea, the crowd of crew members parted to reveal a nervous Jeffrey squirming in the back of the room.

“I don’t give two rats about a code three violation,” said Crew Leader, stomping toward him.

Jeffery would have towered over the short woman, had he not been hunched down with his eyes on the floor.

Crew Leader thrust her face a few inches in front of his.

He whimpered and stepped back, tripping and tumbling to the ground. Blindly, his hand shot out to catch on something but scratched Crew Leader as it did. She screamed in pain at the same time Jeffrey’s back hit the floor.

Noah walked into the room and immediately drew the attention of the crew. The man that walked with God smiled, his six-hundred-year-old eyes crinkling, still with a youthful sparkle.

“I trust you’re all ready to get started on this most glorious of journeys?”

Crew Leader shot one last murderous glance at Jeffrey before spinning around with a smile on her face. “That we are, Captain.”

Noah pulled a large pouch from the folds of his robes and shook it high in front of the crew, the contents clattering within.

“Each of these rocks represents responsibility for the animals in our care. As you take your lot, rejoice, and know that you are looking after the life that shall flower this next age upon the earth. An age of peace and prosperity, an age of which you are the dawn!”

Eagerly, the crew members stepped forward and selected a rock from Noah’s pouch. Off went the farm animals and the birds, the reptiles and the monkeys. Next went the large cats and wolves, then the elephants and horses and camels.

Jeffery waited at the back of the line, practically vibrating with excitement. Before long, it was his turn, but as he approached he found Noah folding up the pouch and stowing it back into his pocket.

Noah smiled and placed a weighty hand on Jeffrey’s shoulder. “There are still a few animals who need a caretaker,” said Noah. “And I know God found you to watch over them.”

Jeffrey beamed at the praise but found that over Noah’s shoulder Crew Leader was stifling a laugh. Jeffery looked back at Noah and forced a smile, though his heart had sunk into his stomach.

Several hours later, Jeffery found himself standing at the stern of the ark staring at a small boat being towed in its gigantic shadow. It was bound to the ark by a long heavy rope - a rope that Jeffrey was to climb each day to assume his post in the-

Crew Leader smiled with glee at the apprehension in Jeffrey’s face.

“We’re all aboard Noah’s Ark and you get to be Captain of Jeffrey’s Dinghy.”

Crew Leader giggled and motioned for Jeffrey to begin his descent. Cautiously, he stepped up to the rope and, hand over hand, shimmied his way down the line. He took care not to look into the infinitely deep waters below, fearing it would paralyze him.

After a few laborious minutes, Jeffrey was panting in the small dinghy, feeling the powerful waters rock the small boat as if it were resting on the belly of a sleeping beast.

Crew Leader cackled and tossed a sack of fish over the railing of the ark. It landed in the dinghy with a squelch and splattered fish juices across Jeffrey’s face.

When he wiped the guts away, Crew Leader had disappeared.

Though the sun shone high in the sky, Jeffrey felt like a small child, cowering under the covers to hide from lurking creatures of the night.

There was movement in the corner of his eye and Jeffrey’s head snapped to the side. His mouth opened slightly, but terror stifled his scream. A pair of massive dorsal fins slid leisurely through the water, snaking a path toward the dinghy. Large shadows loomed toward the small boat. Jeffrey shook himself from his terror and tossed the large sack of fish guts overboard.

The nightmarish fins snapped in the direction of the dinghy, leaving churning waters in their wake.

With a yelp, Jeffrey pressed himself flat against the floor of the boat, desperate not to fall out and become part of the meal.

After gnashing of waves, the water stilled and Jeffery slowly sat up. With a laugh, he cheered in victory.

Each day in the following weeks, the sharks would approach and Jeffrey would toss them a supper of fish innards. He gazed at them for as long as they cared to be observed, before watching their silvery-blue bodies slip back into the emptiness of the ocean. Surely, they were never too far from the ark but preferred their space. Jeffrey didn’t blame them. He’d grown quite fond of his time alone, resting in his dinghy on the sea. He could watch the sky, the vastness of the heavens, and the infinite sea. On particularly special nights, the stars reflected in the waters, and his boat would seem to be floating in space, blissfully drifting through a glittering universe.

Days on the ark came and went, yet Jeffrey always tended to his beloved sharks. His dutifulness was well reported, and after several weeks of life aboard the ark, Noah pulled Jeffery aside at dinner.

“I know you’ve been diligent in your care of those terrible creatures trailing us, Jeffrey. They may put a crawling in your bones, but they are a part of God’s plan.”

“And so they shall be, Captain. But if I may offer an observation of the first-hand, they are beautiful creatures. God or nature, whichever created them, deserves resounding praise.”

Noah laughed. “You will be a great man in our new world, Jeffrey.”

Jeffrey smiled and sat back in his chair. Slowly sipping his wine, he thanked God for his good fortune.

“I’m so sorry to interrupt, Captain. I know how hard you work and that you need every moment of rest you can take. Thank you for indulging our little Jeffrey here with some compliments, but he’s needed for a moment. Might I borrow him?”

“Of course, Crew Leader.” Noah embraced Jeffrey and smiled at him as he stood up. Crew Leader kept a smile plastered on her face while she towed him through the dining hall.

As soon as they were out of public sight, the smile fell from her face and revealed her memorable scowl.

“Your demon fishes are acting up.”

“What?” Concern for the sharks overwhelmed him and he dashed off to his post, closely followed by Crew Leader.

Jeffrey ran onto the deck and hopped over the railing, then briskly slid down the line into the dinghy. As his feet hit the boat he glanced about, but the sun had long vanished behind the horizon and there was no chance of seeing anything behind the impenetrable blackness of the infinite sea.

Jeffrey looked toward the ark, the deck’s large lantern illuminating the railing. He saw the figure of the Crew Leader. Something glinted in her hand, illuminated by the torchlight.

“Crew Leader! There’s nothing to be seen out here! I need to be reeled in!”

Jeffrey waited to be pulled back, but the torchlight didn’t become any larger. In fact, it was shrinking. He ran to the rope, but it was limp in his hand, trailing into the water.

With no return to the ark, Jeffrey began screaming, all the while knowing his meager voice would never penetrate the ark’s thick shell. His arms went limp at his sides and he knelt into the dinghy. In the starless, moonless night, the horizon disappeared. Sky and sea fused into seamless, empty darkness. Curling into himself with tears staining his face, Jeffrey was eventually rocked to sleep by the gentle swaying of the dinghy.

When at last the sky burned orange and red and the rising sun began climbing toward the heavens, Jeffrey blinked himself awake and slowly roused his aching limbs. Turning a stiff neck, he searched for a sign of anything but found only water, sky, sun, and cloud.

In a fit of frustration, Jeffrey screamed at the sky and hurled curses at God. How could he abandon his faithful shark steward? Jeffrey had done nothing but love and cherish the sharks he had been charged with! How could-

A fin appeared from the vast blue nothingness. And then another.

Jeffrey felt his spirits stir and he sat up. They’d stayed with him. The familiar sharks circled the dinghy for several minutes. Although he was delighted to find them, defeat quickly overtook him once more. There was nothing to feed him or the sharks. They would soon perish, lost with the others the flood had purged from the earth.

Jeffrey lay back with a cry of despair and something peculiar caught his eye. A fleck of green floated through the air above him.

Jeffrey whooped as the green blur soared into a background of blue sky to reveal a dove clasping an olive branch in its beak.

Suddenly, the sharks stopped their circling and took up positions on either side of the dinghy. The boat lurched forward as if heaved by the hand of the ocean.

Jeffrey cried out in delight and stuck his hands into the sea spray misting over the dinghy’s edge. He was flying. Chasing the tail of the dove on a chariot propelled by the ocean’s most feared predators.

“The Steward of Sharks has returned on this most blessed of days! This holy dove has brought an olive branch to signal our arrival into a new era!” Noah placed his hands on Jeffrey’s shoulders. “Thank God, for he has returned our Jeffrey to us.”

“She was witnessed tampering with the rope,” said Noah. “We had planned to throw her overboard and purge her from the earth. Now that you have returned, I shall concede to your judgment.”

“Do not throw her over.”

He stood in front of the woman that had cut him loose to the sea.

“Rather, let all history know her name. She, more monstrous than the sharks I grew fond of caring for. Let those that follow in perpetuity know you so that they may beware her - she whose name is Karen.”

More stories from Benny Shlesinger and writers in Fiction and other communities.