by Amy Christie 2 months ago in Sci Fi
Report Story 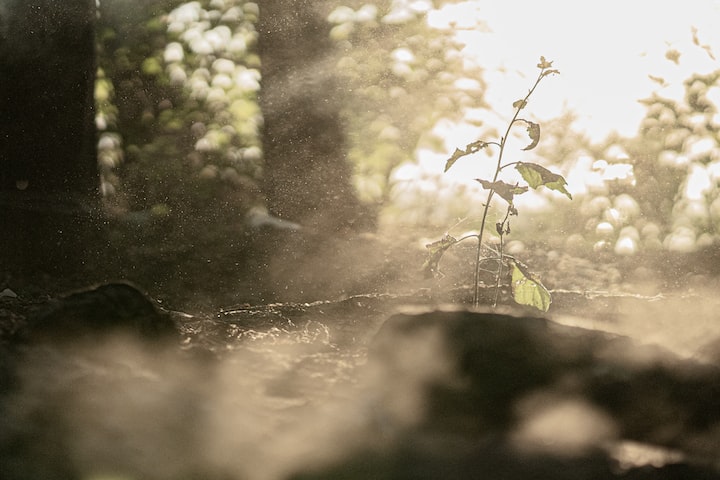 Photo by Eugene Chystiakov on Unsplash

Nobody can hear a scream in the vacuum of space, or so they say. None can give me the time, how long I'll be trapped until this ends. Running, hiding, crawling behind the chimera... radiation always on our mind. I see it on their faces... I know mine must show the same fear.

No sunshine, no fresh air... no flowers and no songs. It's been so quiet since we left.

Ours was the last ship that took off when the lava started flowing. It came as an aftershock after the radiation spread. The hot air melted faces and triggered unheard-of diseases.

The radiation did the rest of the work. The people I knew were hard to recognize. A few minutes more, and they were begging for an end. To pain, to suffering... to seeing their world destroyed.

I couldn't believe my eyes. All the flowers we'd been growing for decades torn in a raging wind, acid rain falling after it. Not one seed could be rescued for the future... when the soil wouldn't be filled with death. Maybe even that hope was just wishful thinking. Who could clean radiation once it got to the planet's core?

I was one of the few in a capsule when it all began.

I watched, powerless, as everything was getting contaminated, killed... or dried on the spot. Even the leaves that stayed green were diseased inside... no flowers would come back from those stems.

And the people... my kin. They looked frightened for a few seconds; then, they locked the capsules so we couldn't get out. We tried; I did my best to smash the glass. I should've known better. The shield around the capsules is meant to last for millennia against any disaster.

They knew what would happen to them... they chose our lives. And I felt guilty all this time. Remorse follows my steps.

I should have been outside on that day... to help or to die with my family. What life is this... always running, narrowly avoiding death... always in the path of destruction?

We woke up the worms, and now we're paying the price.

Digging deeper, trying to find the secrets in the soil, to communicate with the planet and its core. Finding that secret language was more than we bargained for. In the end, when it spoke, our race was almost wiped out.

We sent out teams, witches in tow. To chant to every type of soil, to make it let out secrets. We were determined, sure we would rule this world... and the next.

And I was one of the top officers. I asked to go inside another layer and lower... and I never thought about what could be lying inside... in waiting. We scanned the planet; we built shields... nothing moved. So, we thought it was safe to go down. And into the core.

And that's when everything changed. One day, I was supervising diggers, seeing to spells, and thinking of a new way to get the soil to utter sounds.

A few particles of dust caught my eye. They shone turquoise, like no other rock we'd touched around there. And when I looked closely... they were gone. How could that be? I'd been holding them in my hand just a few seconds before.

I thought hard about what I'd seen... they winked back into existence. I could feel the grains in my hand once more. I looked up and down again... gone like an instant before. What could this be? A trick? A way to communicate?

And then I heard a whisper.

A gentle, floating sound. One that could be missed so easily in the din of digging with lasers and shields being built. Behind the words of chanted spells, this whisper came to me.

I felt vanilla, then a nutmeg scent... then words... beckoning, asking... trying to pull me to a corner.

I couldn't repeat the words, but somehow it felt like I knew that voice. Even if the words sounded alien, I felt I was about to uncover something that would change our fate.

So, I went with the whisper. It was like holding hands, playing, diving deep. I went to the corner where it called me, and there, I saw a door. Not a tall one or even a kid-sized opening. It was a sideways door. Only seen from an angle.

The whisper sounded from inside, more alluring and sweet. I went in, one hand, one foot, then completely stepping inside. It was dark except for a mirror in the center.

The place was made of soil, added from ages past, and salty ash. I could smell the embers even if I knew no fire had broken out for at least a thousand years.

I searched the wall, the sides... the door was gone. The mirror... I checked it again. It had gotten bigger than the last time I looked.

I judged it wise not to lose sight of it again. And I went closer. What else could I do?

If there was a way out, it wouldn't come from the missing door.

One inch away from the glass, I reached with my fingers. I didn't meet it... it turned to water... liquid fire. As soon as I grazed it, my fingers itched. They hurt; they almost snapped. What kind of glass was this?

What way to build a fire into a cold sphere? My curiosity got the best of me, and I tried again. This time, I put my palm on the glass.

I didn't feel a burning sensation like the first time. I felt comforted... almost hugged. And the whisper that had been gone since I entered turned into a voice.

'Who passes in glass fire? Who dwells on the other side?'

'Who commands you? Power, destruction? Are you coming with the void?' the voice said.

'Acid was passed on all that lived. Forgiveness scorched out of each soul. None can live after the mirror touch.'

'Peace is my offering, not destruction.'

'You should never have descended here. Your end is near. Your palm took my poison.'

'One question is allowed before the end.'

'I am your forefather, the one who began this race. I spoke to the core, and I stayed inside. Prisoner for eternity, I quell all who try to speak. Soil knows no mercy, no end.'

'I seek knowledge only. Stop this wave. You don't need to destroy us.'

'The dust has spoken. Go now to your doom.'

The sound zaps out; the mirror starts to melt. It turns into a fire... surrounds me... flames touch my skin. But they feel cool... it smells like nutmeg again... I step inside the fire, and I'm back. In the corner where the whisper took me.

I urge diggers and witches... I hurry steps, end pleas. I still remember what I heard.

It won't be long now.

Protests and cries going higher, I get them all out and prepare. We need to leave this planet with daybreak. I can't trust it to keep us alive more than that.

But it started sooner than I thought.

Ten minutes after getting my people on the surface, the ground began shaking. Deep underground, a noise... tearing apart each piece of soil. Taking dust higher... ever closer. I shouted to hurry them up.

High from my capsule, I saw the wave come... then it became transparent... went inside each soul. A blazing radiation veil brushed all the living.

They still breathed... they were changed. They ran to close capsules... to keep us safe. The few remaining who were locked, like me... tried desperately to help. To send drones, shelter, tents... to keep them warm... to stop disease.

There was no time to comfort them. The second dust wave came an hour after. Down it crashed, taking flower remains and undead kin. Nothing left standing after a few seconds... a voice becoming louder in destruction.

There was no time to lose. I directed all capsules on two ships. And we prepared for takeoff. That's when the dust took shape.

A giant hand touched the other ships. I gave the command to release and depart. But it was too late.

The hand turned into 30 tentacles.

The ship was surrounded. Slowly, the tentacles ground through steel, zirconia, all alloys meant to last a lifetime... and eons more.

I looked down on the soil... and I saw moving things. Tall, slashing fangs in every direction. Worms had come out in hordes.

Feeding on radiation and suffering.

I'd known them long ago. Could I have spoken to a Worm Descendant? But I'm not a worm myself. I'm human... as far as I know.

Maker's binding in different species is something rumored... not proved. It can't be.

What could I be? Did I bring this end?

I heard their screams... I said their last prayer.

Tears in my eyes, I decided it was now or surrender. I took off in the second ship, my surviving kin in the ten capsules inside.

They wanted to go back... I did too. But that wasn't a choice. I felt the swish of tentacles barely missing the ship... and then we were free.

Or so we thought.

Particles of dust latched onto the ship like a fingerprint. A cloud of radiation kept track of us. We tried to land on three different planets, and worms instantly formed on the land and zapped radiation all around.

I dare not think how many lives we've ended in this chase.

Hiding in this galaxy from an unseen enemy... staying on the very edge of the orbit to avoid tracking.

We're running out of fuel. Soon, we will have to land for a few days.

Tomorrow, we take a vote on which planet to touch ground.

Can I dare hope no worms will show up? Guilty of so much destruction. I will bring the end of dust—breaker, unmade.