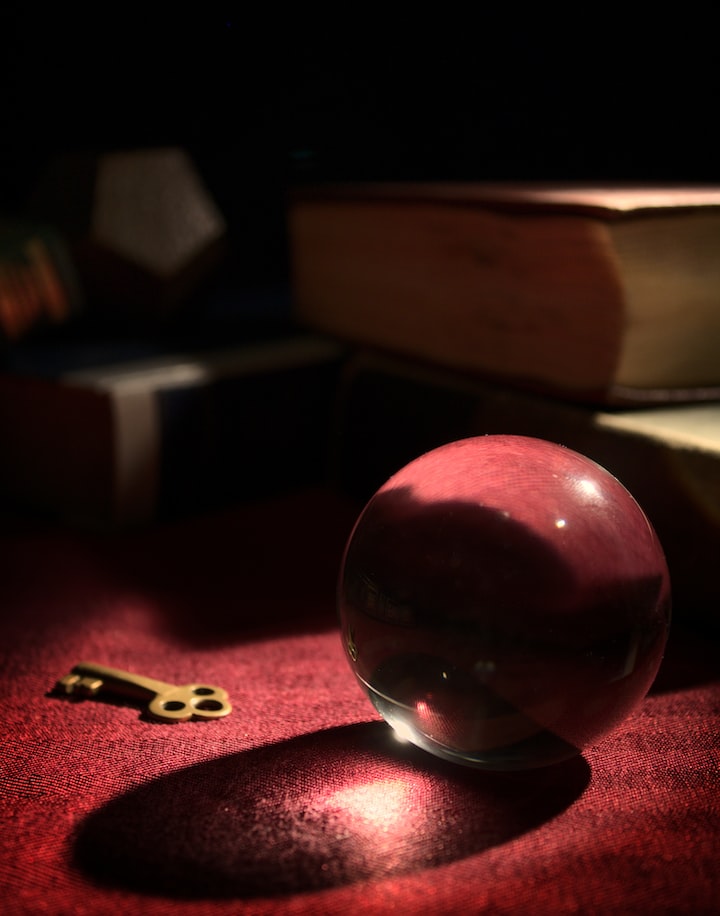 Selene sat on the floor of her bedroom, door shut, curtains closed. It was dark save for the candle burning in front of her. She lit the sacred herbs on fire, waving the smoke before her in the shape of a pentacle. The crystal ball, resting on a wooden stand, glinted in the candlelight.

“I call upon the spirits of the night, the demons of the flames! I call upon you, oh great Malevolent One, the devourer of souls! I wish to speak with you!”

A black smoke filled the inside of the crystal ball. A flaming circle burst forth around it, and the black smoke rose out, turning into a monstrous green eye ringed with fire and shadow.

“My faithful witch, Selene,” came a voice from the eye, a deep, raspy voice scratched out from the depths of hell. “Have you completed the ritual?”

“Yes, master,” Selene said. “The plan is almost complete. We need but one more sacrifice to bring about the apocalypse.”

“Excellent,” rasped the demonic eye. “I await the days when you and your coven shall serve me personally in the halls of the underworld. When shall the final sacrifice be performed?”

“This full moon, my lord. We are selecting the appropriate victim now. In just a few days, we shall—”

“Mama?” said a voice at the bedroom door.

Selene froze. So did the flaming eye.

“Mama?” The door creaked opened, and a toddler ran in. “Mama!”

“Evan!” Selene wrapped him up in her arms. “What did mommy tell you about interrupting her while she’s on a call?”

Evan stared up at her with big brown eyes. “I miss Mama!”

“Mama’s here, don’t worry.” Selene rocked him back and forth. Then she looked up at the demonic eye. “I’m so sorry, I thought I’d locked the door—”

“It’s no matter,” rasped the eye. After an awkward moment, it asked, “How old is he?”

“He just turned two last week.” Selene booped Evan’s nose and he giggled. “My little man’s getting so big.” She tickled him and he giggled some more. “Yes, you are, yes, you are!”

“Ah, yes, how easily time slips away from us,” said the eye. “I remember when you were but a teenage girl dabbling in the dark arts.”

“Those were the days.” Selene held Evan close. He started sucking on his thumb. “Dying my hair black, painting my nails black, wearing nothing but black. So much has changed, and not just my wardrobe. Before I know it, my little boy will be going off to school and then…well, no, I guess he won’t.” She gestured toward the eye. “The apocalypse and all.”

“Right, of course,” the eye said. “The world will be ending soon and there will be no more schools. No more…no more children.”

There was another awkward silence, punctuated by the noise of Evan sucking his thumb.

“You know,” the eye said, “I think I may have miscalculated the dawning of the end…”

“Yes, yes, now that I think of it, the apocalypse isn’t supposed to start until…uh…next century. Yes, that’s right. Another hundred years from now, then everything will burn and all that. So you can just, um, tell your sisters in the coven that we’ll be putting the plans for the final sacrifice on hold for now. You’ll all get to serve me in the underworld when you die anyway, you’re not really missing out…”

“Thank you. Now I must go. Until our next meeting, my faithful servant.”

“Until our next meeting, my master.”

The eye dissipated, the smoke vanishing. Selene turned on the overhead light, put out the candle and the smoldering herbs.