Improvise Your Cards Out

by Dani Banani 2 months ago in Script

A creative way to use your voice 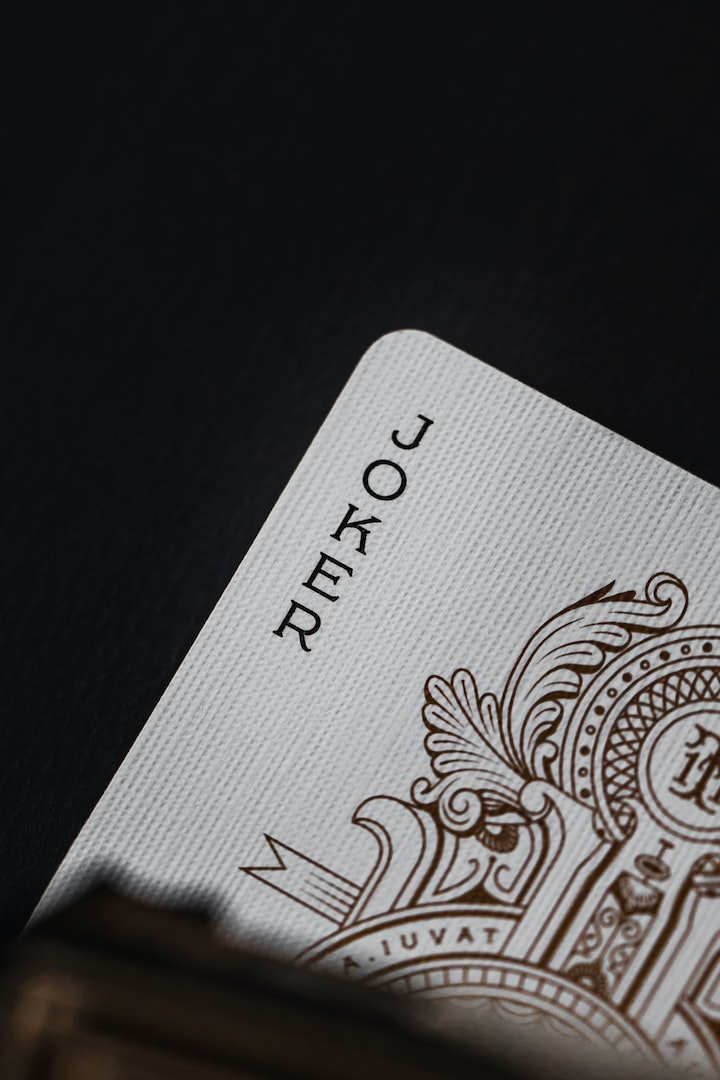 Photo by Sven Ciupka on Unsplash

Improvisation Acting Class, Tuesdays and Thursdays at 7:00 p.m. at the local civic theater, five members present with eighteen spectators. Currently, the members are on their Thursday class of the week, and next week has no planned classes due to Christmas.

The Wiz: I say we're at a drug store. What are you here buying?

Cyndi: A game for the grandkids to play.

The Wiz: What's the game called?

Cyndi: Because it has sharks? ...ugh!

The Wiz: Next. Fast pace, keep it going.

The Wiz: What's the purpose?

Clarence: Overcoming fears, it's funny. You gotta defeat Boggarts in Harry Potter by making your fears funny. So it's like that without the magic.

The Wiz: So the "Shark Bait" title?

The Wiz: Can you say that with absolute confidence?

Noah: Plenty of people like them just because everyone else doesn't, though. It's edgy.

Ramone: So the title offers the idea that it should be scary, but the card game is not one to scare people, so why does it have a scary name?

Noah: Or she's just right, every kind of humor is liked by someone so this isn't discounted.

The Wiz: Not really feeling this, guys. Try again. We're at a drugstore, what are we buying?

Cyndi: Skincare products. I ran out of moisturizer.

Noah: I think we could do better.

The Wiz: All right, if you think you can handle it, by all means. Tanya.

The Wiz gestures for Tanya to take center stage. Tanya walks to the center of the stage, away from the group.

The Wiz: Who are the lucky victims?

Cyndi, Clarence, and Ramone take the stage with Tanya.

Cyndi: Excuse me, ma'am, can I ask your opinion on this card game? I've never heard of it before.

Tanya: Oh, that one is new, I just finished stocking them! I'm so sorry, I wish I had an opinion to give, but ---

Clarence: WELCOME to my store, ma'am! I'm the manager of this fine establishment. I see you're interested in our newest game! Why don't we sit down and play a round before you buy it? My employees and I don't know anything about it and we can ---

The Wiz: Clarence, real quick, is that something that would commonly happen?

Clarence: Nah, Wiz, you're assuming just because I'm starting up something this original that it wouldn't be entertaining.

The Wiz smiles, pleased, and silently gestures for the group to continue.

Clarence: We can decide together what we think about it. What do you think?

Cyndi: Oh! Well, I'm not so sure about that, what if it takes too long? I was just trying to find something quickly for my grandchildren, they're staying with us for two weeks while their parents go on a cruise and I want them to stay busy.

Ramone: Excuse me, I was over there shopping for toothpaste and heard your conversation. Mind if I join in? Maybe we could just try one round?

The group walks over to another part of the stage and all take a seat in a circle.

Cyndi: This is so silly. I've never done anything like this before.

Tanya: We have a really cool manager. Just go with the flow, girl!

Clarence: I'll deal the cards. It says here we each get five Fear cards and five Trigger cards, and we have to come up with the funniest combination. The Captain of the round decides whose is funniest and each round gets a new Captain. Once everyone has been Captain at least once, a winner should be determined, or everyone takes a turn as Captain one more time to determine a winner. Any questions?

Ramone: Nope, LET'S DO THIS!

Clarence "deals the cards." Ramone inserts his infamous saxophone sound effects as he reviews his choices.

Various players chuckle to themselves.

Clarence: Ma'am, would you like to be the first Captain?

Cyndi: Oh, yes, thank you! When everyone is ready, read your fears and triggers to me.

A brief pause happens before the members share their card combinations.

Ramone: Fear of the dark, triggered by a broken ice cream cone.

Mild chuckles come from the others.

Tanya: Fear of spiders, triggered by a shark in a tutu.

Louder chuckles come from the other players.

Clarence: A fear of flutes, triggered by a broccoli casserole.

Cyndi: Oh yes, I'd like to put my own fear and trigger together.

Tanya: I'll be Captain next since I won this round.

Cyndi: A fear of trampolines, triggered by accidentally putting salt in your cereal instead of sugar?

Clarence: A fear of ladders, triggered by a ping pong ball.

Ramone: A fear of living without bones, triggered by having really good eyesight.

Cyndi: Yeah! Girls win! You know what, I think I want to buy this game. This has been great fun. Thank you all for giving this old woman a laugh tonight, I sure hope the kiddos love this too.

The group returns to their seats.

The Wiz: That was interesting. I appreciate your persistence, Tanya and Clarence. Curious, Cyndi, why the comment about salt and sugar with the cereal?

Cyndi: Oh, I actually did that on accident once as a child, so I thought it might be funny to bring it up.

The Wiz: Using personal embarrassment as a tool for creativity - I dig it. And therein, we find the best in using the worst in ourselves to our advantage. Clarence, what brought up the broccoli casserole?

Clarence: I hate casseroles, and I hate broccoli, so I figured I'd try to make it funny for myself.

The Wiz: Straight to the point, man, sometimes that works best but a lot of people hate those things so keep coming up with some original concepts before the next class. Tanya?

Tanya: I figured the game would have some kind of shark mention in it since the title is Shark Bait, so I went with a goofy form of a shark to tie the name of the game in more.

The Wiz: Again, persistence, since I wasn't too hip to the card game idea to begin with. Well done. Ramone? I cannot begin to imagine what made you think of having a boneless body with great eyesight?

Ramone: Well, like Tanya, I was working on the shark thing of the game so I went with some little known facts about sharks and turned them funny. Educational in a slick way. -makes triumphant musical noise-

The Wiz: Teaching the teacher, I see how it is. Cool concept, but hard to grasp onto if you don't know those tidbits. I love it, but creative education is nothing without proper context.

The Wiz: Final session before Christmas, but multiple great things to point out from today's quick one-and-done practice. First, like I said, creative education...if you can include that in your dialogue, you're using entertainment to give people well-rounded and useful information to have. You're giving them things to talk about or even research. Ramone, that was a great addition to today's exercise on originality. Let's think about that one for our next class after the holiday. Second, I appreciate the persistence from you guys; challenge me more often, I like that. Third, and this is the most important: take your own past, pick it apart, find things that you're not comfortable with and make them something unique for your improv. It's therapeutic, my friends, to approach the darkest reaches of ourselves and come up with something interesting to give to the world. Take your past and re-make it. Think of one thing you could turn into something crazy, and tell me all about it in a couple of weeks.

Everyone stands and starts gathering their personal belongings.

Receive stories by Dani Banani in your feed
Dani Banani
Read next: The End Of The Beginning