How the Mighty Fall 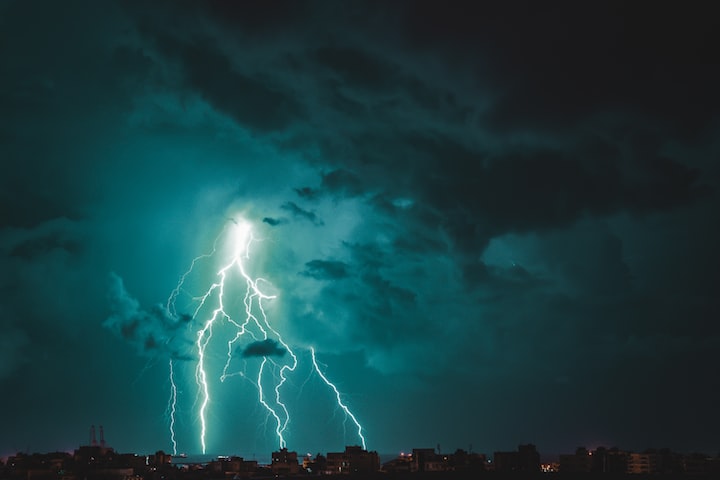 Photo by Toufik Tabikh on Unsplash

The clouds roll in without warning, gray like the storms, crackling with ominous green lightning that strikes against the ground in fierce, sizzling whips. The sun blots out, the winds pick up and howl. A raging beast of moisture and thunder gallops through the skies, unimpeded, each step echoing like a sonic boom.

Mothers usher their children indoors, fathers shutter the doors and batten the hatches. The shopkeepers employ Storm Shields in an attempt to save their merchandise. The libraries and museums, the restaurants and theaters, and the churches and recreation centers follow suit, raising their lightning rods as high as they can go.

And then they all hunker down to wait it out, shivering through the otherworldly chill that pierces deep into even the warmest homes.

Little Timothy huddles against his mother's side, his eyes glued on the rattling windows, flinching with each shriek and thud of objects breaking and trees falling outside. His mother and father are both pale, the three of them embracing each other in a dark corner with the lights turned off.

Something explodes from the house next to them, pelting the side of the wall with chunks of debris. The windows shudder under the assault, but thankfully hold with their own Class-C Storm Shields in place. The same can't be said for the occupants of the house; the sounds of their screaming can be heard briefly before they abruptly die off.

Timothy puts both hands over his ears, shaking so hard that his knees are knocking together. His mother pulls him closer, pressing little kisses against his hair, while his father rubs circles against his back. We know it's scary for you and we're sorry you have to go through this, but please hang on a little longer, they say.

Timothy nearly cries out as a stray lightning strike blows the roof of their house wide open, bits of plaster and smoking roof tiles crumbling to dust above their heads. His mother claps a clammy hand over his mouth before he can produce anything louder than a choked noise, shaking her head. He gulps down the cry, his eyes huge and watery in his face.

Right, can't make a sound. Otherwise they'll all be dead.

His father urges them to relocate to another spot in the house, but they have to move slowly to avoid being seen. They keep to the shadows as best they can, making their way to the study all the way in the back of the house. Timothy tries very hard not to trip over anything, which is a monumental feat in itself when everything is shaking and he can still hear other places being obliterated outside, but he manages alright with his mother's warm hand clasped firmly around his own.

They manage to get into the study without incident. His father closes the door as quietly as he can before joining his family in huddling beneath the oaken office desk. Here, the sounds of El Toro's rampage are more muted than the living room, because the study has a layer of soundproofing material between the walls.

It doesn't make Timothy any less scared, but at least there's no more screaming.

The sounds of the storm continue for what seems like hours, but nobody knows for sure. They're not keeping track. They sit crammed together underneath the desk, holding each other for dear life as the world falls apart under the Bull's hooves. Glass shattering, sirens blaring, trees toppling, floorboards rocking. Wind screaming and concrete buckling. The noise is so constant that it all blurs together into a single chaotic cacophony.

Timothy hates it. He wishes El Toro would just go away and leave them alone.

At some point, the world finally stops shaking itself to pieces. The family stays where they are for a bit, making sure they aren't being lured into a false sense of security, before they crawl out from under the desk.

Only to come face to face with the storm's eerie green eyes bearing down on them from above, where the roof over the study had caved in without them noticing. Timothy squeaks involuntarily, and both his parents gasp in fear.

"No!" his father yells, leaping in front of him as a bolt of lightning crashes through the wall. He's vaporized on the spot, leaving nothing but a smoking scorch mark upon the floor.

"Darling!" his mother shrieks, her hand outstretched. Timothy knows what's coming before it happens, but he still flinches violently back as his mother also disappears in another sudden flash of green light, the smell of ozone and burnt flesh drifting through the air.

Timothy's eyes water and he lets out a quiet sob as he stares at the two black marks on the floor where his parents had just been standing. El Toro growls and thunder cracks through the sky.

The little boy's eyes fall on a broken vase that was tipped over from the desk. Water and a mixture of bright yellow dandelions and marigolds spill out.

As the Bull raises a stormy hoof to beat down on him, Timothy snatches up the flowers and throws them directly into the storm's face, screaming, "GO AWAY!"

To his astonishment, El Toro rears back with a bellow, as if the flowers burned. It tosses its head back, snorting, its great electric-green horns crackling dangerously, the clouds swirling violently around its body.

However, it seems that the flowers don't do any permanent damage to it. Timothy tearfully braces himself for death as the storm turns its attention back to him, cloudy hooves stamping down on the remains of his house, its green eyes sizzling with murderous rage.

Then the sun breaks through the dark clouds. The storm lets out a deafening wail as the bright light pierces through its whole body, the shadowy clouds writhing in agony against the onslaught. Green lightning lashes out, attempting to force the sun back to no avail. El Toro roars in pain.

The little boy blinks at the surreal scene, unsure what's going on. Then he looks at the flowers that he'd thrown at the storm, and they're glowing gold.

Oh. Yellow marigolds stand for happiness, optimism, good luck, and joy. And dandelions—the yellow ones represent the sun's power, the ability to rise above the challenges of life.

For El Toro, the Bull, the chaotic storm of lightning and death, the sun is its ultimate antithesis. It doesn't stand a chance.

Timothy watches on in equal parts awe and desperate hope, pale-faced and shaking, as the Bull gives one last, defiant howl, green lightning discharging in all directions, catching on the lightning rods and dissipating harmlessly to the ground, before it finally vanishes under the overpowering light of the sun, leaving nothing behind but a single bejeweled horn that cracks in half upon hitting the ground.

His house is broken.

His parents are dead.

And his town, ruined.

A hobby writer and aspiring novelist with a far too active imagination that she wishes to share.

Receive stories by Netti in your feed
Netti
Read next: Chomp!