Time is running out for all of them. 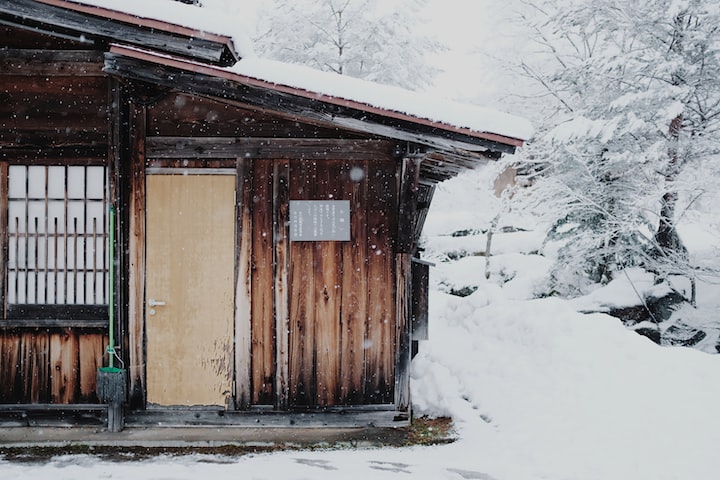 Cyrus worked up enough wet in his mouth to spit in the snow at John Engel's feet. Having to move his scarf out of the way to do it robbed the gesture of its dignity, but the good lord hadn't yet offered him the power to set a man on fire just by hating him.

"Well," John said slowly in that oily, genteel voice that Cyrus had distrusted since they were schoolboys. "You know my offer, Cyrus. And between old friends -"

"Go to hell," Cyrus interrupted. "We're as much old friends as your Ma's an honest Christian."

If the insult landed, John didn't show it, the thin smile over his scarf as tense as if he'd nailed it there. "Say whatever you want," he said as quietly as he could with the wind starting up. "You know I'm right. You're the last one here. Everyone else took their price and headed to town. Now, I'm here as a favor to you - the price isn't going to get better from here. You hold out long enough, and they'll spring eminent domain on ya."

Cyrus grimaced. He remembered John emulating the speech of the mission teachers who'd come through every couple of years, their city accents shiny and smooth. Cyrus preferred the sounds of mountain speech, ragged enough to hang a feeling on the end of every word. You couldn't tell what a person was thinking when they talked like a city man. But John had done his level best to beat the mountain ways out of himself, and whether he had let himself lapse back into his childhood tongue out of calculation or true emotion, Cyrus didn't care. It would always sound fake, coming from John.

"Get off my property," he growled. "You're not welcome here, Engel."

John lifted his hands in a gesture of surrender. "Have it your way, you stubborn sonofabitch," he said, the frustration finally coming through. "I'm trying to do you a favor!"

Cyrus considered grabbing his shotgun for emphasis, but John Engel wasn't worth a wasted bullet. John turned around and started down the path, his long city coat flapping in the growing wind. Cyrus checked the sky out of habit; John would probably beat the snow down, or it'd only start getting bad once he was almost back to the post office. He could take shelter there, wait it out, or see if whatever horse he brought with him was able to get through to town.

Suddenly, Cyrus felt too warm and restless to stay inside with the woodstove and his Ma's quilts. He unhooked the snowshoes and cold weather pack from the nail by the door and slung them across his back, filled his canteen with water from the stove kettle so it wouldn't freeze, and pulled on a thicker pair of mittens before heading into the coming storm.

He reached the pond in short order. In the summer, the kids swam in it, chased frogs on its banks, and learned to fish the little trout and perch that made their homes in it. At its highest point, it only reached Cyrus's chin, which meant that it froze quickly in the winter. They kept a wooden sign nailed to a tree nearby, a removable panel in it letting the kids know when it was safe to walk on the ice, try their hand at skating or ice fishing. There were fewer and fewer kids each year, now, as their parents sold out to Engel and the mines and moved to town, but a small handful still remained.

Cyrus took a careful step onto the edge, then a few more. The ice would hold. He took a small hand drill from his pack and made a hole just barely half an inch wide. Six inches of ice before he hit water. More than enough.

When he was a boy, they'd drunk from the icy mountain streams that fed this pond. Now, the mission teachers taught them about giardia, which could give you the squirts so bad you dried up and died. Pretty soon, mine runoff might get in, start turning the waters a rusty orange, as it had in other places.

"Damn you, John Engel," he muttered, staring at the cloudy ice beneath him.

"Mr. Cyrus?" a small voice shouted from the other side of the pond. Cyrus looked up to see Ward Hickam's boy, probably ten years old, at the far bank. Cyrus beckoned him over, stamping his feet to show the ice was safe.

The boy came carefully, only wobbling a few times on the slick surface. Cyrus didn't see any ice fishing gear, nor skate blades for the bottom of his boots.

"What brings you out here?" he asked, looking to the sky. The clouds were coming in thicker. It wouldn't be safe out here much longer, not for a boy alone.

"You tell your Pa -" Cyrus began, and then stopped. If he had to hole up somewhere, he couldn't do better than the Hickam place. Ward's Edna could cook with the best of them, and they had a spare bed since their oldest went to live in town with the other mine workers. They'd winter it out one more, and sell their land in an agreement they'd already signed with Engel in the spring. Once they were gone, Cyrus would be the only one living on the mountain full-time for miles.

" - I'll be coming right along. Now you git, before it gets bad. Don't stop for nothing, hear?"

The boy picked his way back across the ice and broke into a jog once he reached land. Cyrus took one more look around, then headed back to his cabin to grab his fiddle, a jar of hooch, and some molasses for Edna. As he banked the fire and barred the door, he could swear he heard the faint sound of hammers and picks in the distance, coming ever closer.

More stories from Dane BH and writers in Fiction and other communities.