by Jorja Grace 5 months ago in family
Report Story 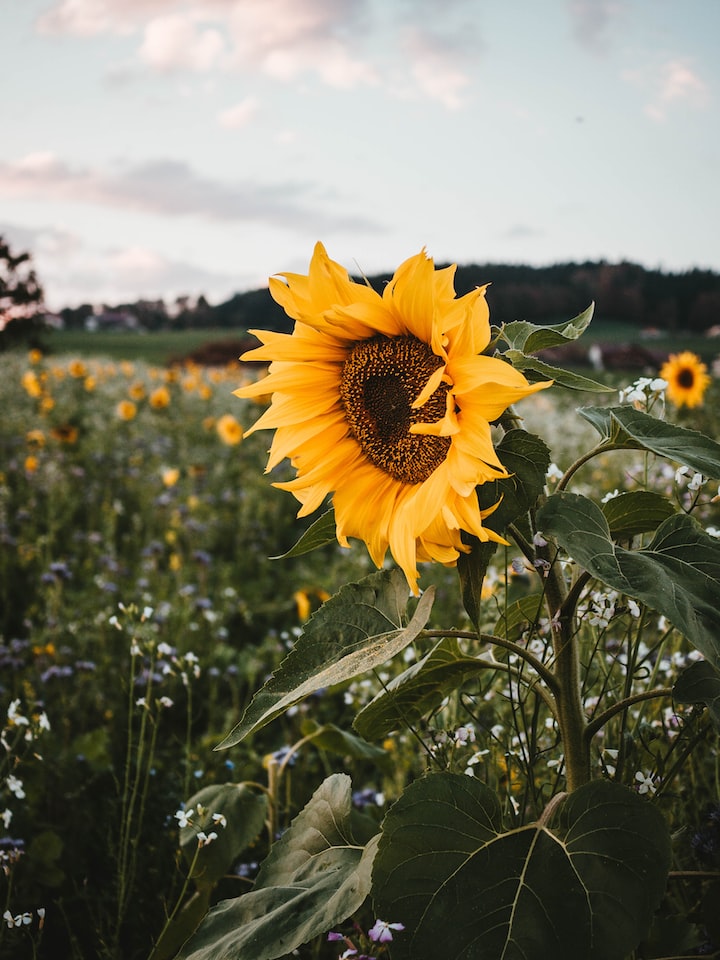 Photo by Matthias Oberholzer on Unsplash

Pink petals press against the icy glass of my windowsill. A halo of fog surrounds the tip of the soft magenta flower like a frosted crown.

I pour a few drops of water from my bottle and watch it soak into the dirt. I move my water bottle to the next windowsill pot, where tiny green shoots are sprouting from the soil. My basil plant, David, is growing in a silver tin. He’s doing well.

My first basil plant, Veronica, was planted about two weeks before. Her sprouts are much longer but just as thin, the light green stalks almost transparent in the sunlight. Two round leaves sit atop every thin stalk like a hat.

Next to her, Sofia grows in an orange pot. The stalks of the sunflowers are thicker than her basil brother and sisters, and her leaves are more elongated. Sofia is the oldest.

Her name is sacred to me and she is precious, a daily reminder of beauty and sunlight, of innocence and young life, of loss and memory.

Every sunflower I grow shares the same name, a testimony to a young girl.

I was around 6 years old when I attended Sofia’s funeral. It was not my first encounter with death, but I’d never been to a funeral for someone even younger than me.

The truth was crushing.

When the service was over, her father passed out packets of sunflowers.

She was his sunflower, he said, and each flower was a reminder of her. I went home and planted the sunflower seeds in a circle on the hill. It was an exceptionally dry summer, and many of them didn’t grow. But a few did.

Each of the sunflowers had the same name.

I decided then, that not only sunflowers, but every plant I owned would have a name.

As Adam named the animals in Eden, he became their caretaker, I remembered from Sunday school. In the same way, I had a responsibility to these plants with every name I gave them. To every life I was bound.

To Sofia I was bound.

I thought that naming the plants would preserve them forever, that nothing would stop my fruit trees from growing tall and proud, to nursing my flowers into vibrant splashes of color.

But I was still naive.

That summer was exceptionally dry and hot, as I said. I remember the scorching rays of 2008 heating my mother’s car like an oven. And the summers did not stop. From 2011 to 2019 a drought burned through my home like an apocalyptic horsemen, affecting over 58% 0f California land.

The world was changing; the golden state was scorched black by fires and sun; California withered while the debate between scientists and skeptics raged over this supposed climate change problem.

I didn’t know much about climate change at the time. All I knew was that the sanctity of my home was fading.

As the summers ticked by, a horrible realization found me; one day I sat in my garden, which once boasted vibrant red cherry tomatoes and strangely large squashes, zucchinis, and even the occasional eggplant.

And I realized that the dark green zucchinis were getting smaller. The cherry tomatoes were not as sweet. The occasional eggplant never showed up.

My garden had been bountiful for as long as I remembered; my house was on the property of an old orchard, which had been domesticated long ago but was bountiful.

The oranges were fat and sweeter than any candy. The lemons were long and eye-wateringly sour, the plums were deep maroon-purple and juicy enough to guarantee a mess.

The crabapples were sometimes tart, but refreshing, and the peaches became warm pie.

The jackfruit tree riddled the ground with green splatterings of fruit, and the macademia trees offered ammunition for our slingshots.

My garden of Eden and her giving fruits were an integral part of my childhood. They were my refuge, my food, my lifeline.

But they were not eternal.

The peach tree was the first to fall. Not long after the hot summer had browned her leaves, bugs and disease rotted her fruit and weakened her branches.

The disease spread to the apricot after that, and both trees failed to bear any fruit the next season.

The crabapples never grew. The plum tree followed the crabapple’s decline, and the apple tree only sprouted about five tiny, sour green apples his whole life.

No matter how much we watered, the summer sun would bake the trees into shrivelled brown husks, the bugs would bite holes in their leaves and burrow into their fruits. All the while, the water bill kept rising, and my family’s money ran out.

My mother stopped watering all together when the roses died and the grassy lawn where I used to play shriveled to dirt. My mother stopped going outside to wander in the rose garden, stopped muddying her hands with the tiny zucchini plants in the garden.

The water had become too expensive to use. My father, who used to help my mother prepare the gardens for Spring, had left. My grandmother, who used to walk with my mom while the morning dew hung to the fruit tree leaves, had died a few years before.

I watched death wash over my garden, over my fruit trees, my colorful roses, my lawn, my family.

My garden of Eden shrivelled, and my family shrivelled with it.

It has been years since the trees died and the sunflowers stopped sprouting. Sometimes when I go home to California, I wake up early in the morning and watch my mother pull at the stubborn weeds gathered among the garden ruins and the fruit tree stumps.

Now that she is older and has a little more time (not much, but a little) she has returned to the garden and the trees.

Last time I came home, I saw a crimson splash of rose petals dawning the top of a thorny stem. A few barren plants down, Belle, the golden yellow roses, had two flowers still in the early stage of sprouting. Winter, the white rose bush, had a single flower with a few petals fallen to the ground.

“They’re coming back.” I told my mom. She smiled at me and pushed back her golden hair, tinged with strands of gray.

“I’ve been working on them.” She said. She plucked a fat orange from the tree and gave it to me. She picked another for herself.

The orange tree, along with the macadamia and some of the jack fruit trees, had survived. The lemon as well, but barely.

Like the roses, the trees did not produce nearly as much as they once had. The fruit was often smaller than it used to be, but in the case of the oranges, just as sweet.

The orange tree is my favorite tree. She is the strongest tree and she gives the most. She has been in the harsh sun her whole life, with scorching rays beating down on her leaves and bugs biting away at her branches, dry dirt choking her trunk. Yet she fights every day to provide my family with the fruits of her generosity.

Strong, beautiful, tall, powerful, giving; it only seemed natural that I name her Janet.

When I look at any of the hardy fruit trees I see my mother’s image, but nothing deserves my mother’s name quite as much as the orange tree.

The woman who withstood the heat of the sun, who bared her strength against abandonment, disease, drought, debt, loss, betrayal. The woman who endured it all, and still had the strength to give.

When I gave the orange tree my mother’s name, I tied my mother to the land she works so hard to protect and nourish. Like ancient Eve, my mother toils day and night to protect what is hers and regain some semblance of what was lost in the Garden of Eden.

In the giving of the name I memorialized my mother’s efforts, her losses and her incredible strength.

The giving of a name is identity, it is truth, it is power.

Now I am hundreds of miles away from my home, from my hardy fruit trees and my powerful mother. I fear for my hardworking mother and her resilient trees, because I know the droughts are not over. Last year, on September 6, 2020, California had a record high heat day at 121 degrees Fahrenheit in Los Angeles. Climate change is promising even worse to come, and I cannot be home to help my mother brush ants off the orange tree’s trunk and soak her roots in costly water.

I pray for the orange tree and speak for change, so that one day I can return to my home and live amongst Eden again.

But for now, the only plants I can fit in my tiny apartment are the pots on my windowsill.

I give them names, I make them promises.

To David and Veronica, my sibling basil plants, I promise utility out of their leaves.

To Daniella, the magenta Flaming Katy flower, I promise prayer.

To Sofia, I promise to always remember her name.

Climate science journalist and short story author. I love using magic realism to capture a candid glimpse of the world

More stories from Jorja Grace and writers in Fiction and other communities.