by Dawn Earnshaw 5 months ago in Horror
Report Story 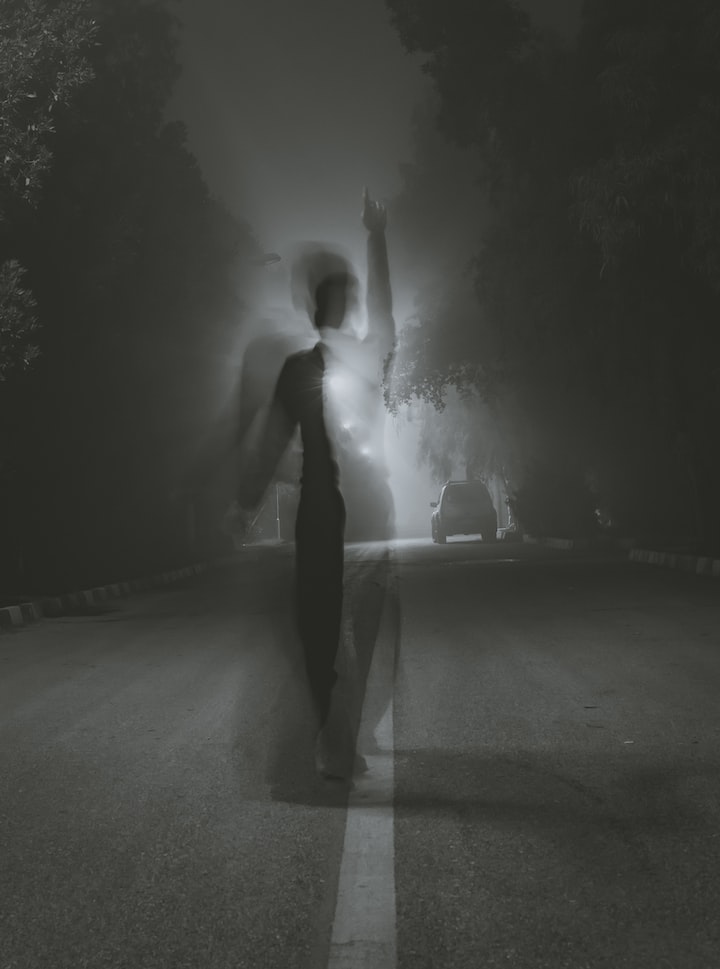 When I was born there was something Demonic about the house. Something was peculiar about it. There were noises at night, doors slamming, footsteps down the hall and the worst thing about it you were never alone, someone was always watching you wherever you were!!

I was 5 when I started seeing sensing something . I was sat playing on my bed when my caravan toy shook and started moving. I couldn’t believe it, I tried to shout my throat was dry. I couldn’t breath, I started to shake. My mum rushed upstairs and I was never the same again.

That night there was a shadow leaning over my bed it was was him, the man who watches you while you sleep. He smirked and walked off, I chased him, he disappeared. I couldn’t get to sleep that night, there was fear in me bigger than a phobia it was building up inside of me and it was getting to haunt me all my life.I knew I would never forget that horrible night.

It happened again when I was 11. I was sat on my bed reading when this woman came out of the bathroom singing, she turned her head, smiled and walked off. At first I thought it was my Sister Jillian but she wasn’t she smiled and Jillian never smiles, I knew I wasn’t chasing her but I had to know what was happening. She beckoned me so I followed.

It was 3am and it was deadly quiet you could hear a pin drop, then you would hear a loud noise. I felt scared my legs were shaking I felt sick , she whispered in my ear “don’t be afraid “ laughed but it was an evil laugh. I just ran upstairs to my mum into her bedroom and told her everything. She told me to get back into bed acting like nothing had happened to me, so I went back and hid under my sheets and fell asleep. It must of been 12pm when I woke up and there was a man in the living room holding up an outfit. Mum was looking at these pieces of papers, tears in her eyes, when she looked up and saw me. She wiped away her her tears, put them in a box and locked them away.

It was made quite clearly that these papers were private and must read in that box and never seen again. I felt weird like she wasn’t telling me anything but then I had no time to think.

Janie my youngest sister started screaming I tried to calm her down but there was nothing I could do. I turned around and Jillian legs were all scratched and Janie could see the blood it was all so very weird. Mum called for a priest however this was also just a dream as the priest left not noticing Jillian’s blood on her legs.

Mum passed Janie to me and she was laughing and could see why, she had done hallowe’en makeup all over her face.

Halloween came and we all got ready Jillian was a bride, mum was a nurse, me as a nurse also and Janie was a pumpkin. Mum took Janie trick or treating while myself and Jillian went to a party. Clarissa house was ancient and crooked, the floorboards creaking and doors were just holding on by their hinges it was the perfect place for a party, I was putting up the final decorations with Clarissa when the door went Jillian opened it and people flooded in. Clarissa and I ran down to the party that’s when I noticed hi. He was wearing a dark red suit with devil horns, he looked up and stared at me into my eyes and I suddenly started to feel dizzy.

I went to join everyone, Jillian was dancing on the dance floor and Clarissa was talking to the cooker, so I went to get her when I noticed him go upstairs. I was really intrigued to find out what he was up to. He led me to the attic, I waited outside the door thinking of what I should do that’s when I heard a bang and ran in. I couldn’t believe it as it was empty! That cannot be right I know he went in there I saw him go inside there.I checked twice, I even checked all the boxes in there he was no where to be seen. I returned back downstairs as the door bell rang and the police were standing there, it was pretty obvious that someone had reported us for the noise. They came in and started to talk to Clarissa to see where her parents were . She clearly explained that her parents knew about it all and she would be staying at her Grandparents when the party was over and they would even be making late tea. She even added that they would be home by 10pm at the latest as that was the latest that everyone was allowed to stay out and would need to return home.

Clarissa parents returned at 10pm and cleared everyone out but Clarissa wanted me to stay so I waited outside by the fence. The door opened and I jumped up. I thought it was Clarissa but it was the man. He smiled and just walked past I was stunned how he could walk out of the house when he wasn’t even in the house. He threw a bottle of water and said epic party; of course it was I I planned it all. Then unexpectedly he told me his name Desman Pickering such a posh name for someone who looked like he never washed, but that seems very familiar.

Clarissa came out of the house and told him to get lost and punched him. Clarissa and I said goodbye to the police officers and walked to my house. When we arrived mum was washing Janie and Jillian was eating Janie sweets so Clarissa and I grabbed a handful and retreated upstairs. Mum heard us and asked why Clarissa was here so I explained she was staying here until the morning. As we walked into my bedroom I felt that weird presence again my spine started burning and I could feel a hand on my shoulder, I turned around and Clarissa was looking in the mirror I went to join her her and she said “why is there a piece of paper tucked in the frame” it read Dear Donna meet me at the Waterfall Café at 12pm don’t be late

I remembered there was a boy a friend in nursery called Desmond Pickering and he had died falling into the Waterfall river on Bank Park.

I never attempted or attended Waterfall Cafe and I was Baptised and in the Easter, I don’t see or hear the man or the woman anymore and that evil presence has disappeared for now until the next time Happy Holidays.

More stories from Dawn Earnshaw and writers in Fiction and other communities.