by Ida Stokbaek 4 months ago in Fantasy 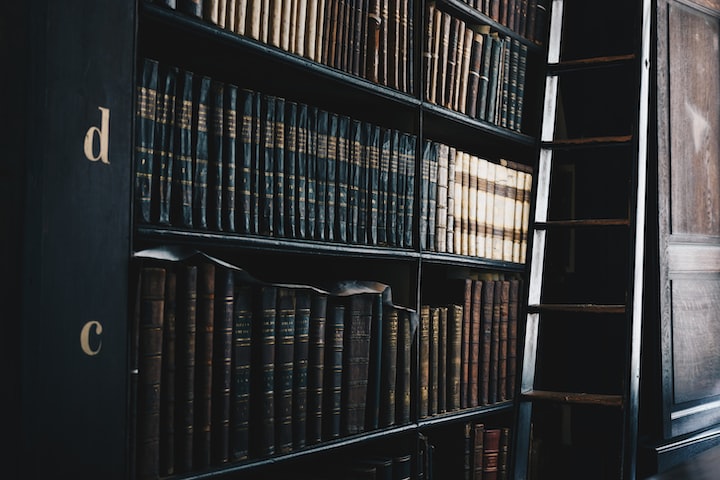 “A customer?” Sounded a squeaky voice from somewhere in the dark. “How peculiar – Ah, I remember now! You must be the new apprentice, am I right?”

“Apprentice?” Sarah groggily lifted her head from the wooden table. The art encyclopedia she had been reading that afternoon was still open in front of her. The library was dark, empty, and completely silent. The only light came from the streetlights outside the windows. Sluggishly, the keen student of art realized that she had fallen asleep in the library.

“When the Loremaster wrote me about the apprentice, I never dreamed he meant one of you?” The voice from nowhere uttered the last word with some antipathy.

Unable to spot anyone the voice might belong to, Sarah wondered if she was still dreaming. It was somewhat unlikely that no staff would have noticed a girl still sitting there when they locked up for the night. It was more probable that she was home in bed.

“One of whom?” Sarah asked the vacant library.

Sarah, who had already been feeling uneasy, endured utter terror for a moment. “What are you?” she whispered, imagining slimy monsters, creeping around in the dark.

A light-hearted chuckle sounded from the dark, making the student’s fears evaporate. “Name is Gutterick, Guardian of stories and make-believe creatures – I’m down here by the way!”

Sarah looked to the floor and saw a minuscule man bowing at her feet. He had a little bowler hat in his hands, having evidently taken it off while introducing himself. His clothing was peculiar, resembling most closely that of a garden gnome, but his features were delicate and pleasing. Unable to think of a single thing to say, Sarah simply gaped at Gutterick the Guardian for a while, until she was able to splutter out some confused questions for clarifications. “What are you doing here? What are – I mean, how does that – why have I never heard of such, erm, creatures before?”

“Creatures?” Gutterick spat. “You call us creatures? Ha! You are ignorant of what you owe to us. Who feeds the Bookworms? We do. Who restores the story lines where these have been corrupted? We do! Who keeps alive the magic? And do humans notice anything? No, humans don’t ever notice anything at all. Their ability to ignore make-believe matters is only matched by their ability to ignore their real problems.” Gutterick took an agitated breath, as if he would happily have ranted on about the failings of humanity. But when he continued, his voice was calm and instructional, like that of a teacher. “Anyway, if you are to be my apprentice, you’re the completely wrong size. Please, stay where you are, and I shall shortly return with what we need.”

Gutterick marched towards a bookcase, briefly surveyed the books there, then picked one and disappeared into it. His new apprentice sat alone at the desk in the library, thoroughly mystified and significantly intrigued. She hoped he would reappear but knew that Guardians of stories and make-believe characters were not real, and this absurd event was now at an end.

A rustle of pages, a faint flash of light and tiny footsteps approaching. “Eat this,” said Gutterick’s voice.

Sarah took it. I felt like a slice of moist mushroom. She wouldn’t have been remotely inclined to eat it under ordinary circumstances, but these were no such circumstances, and she was dying to follow Gutterick into a book. She chucked the substance down her throat and swallowed.

The effect was immediate. There was a sudden flash and a pop, and Sarah shrank to about three inches. The library was now a world without similarity to the place she had just left. The desk was so far above her, she could barely make it out in the dark, the table legs came down like pillars from the sky. The bookcases, like walls to a person of normal size, were like endless, terraced skyscrapers to someone of three inches. The books looked like little doors, just the right size to walk through.

“What do we do?” Asked the apprentice, following closely behind Gutterick towards a row of books.

“Once again, the humans have neglected to feed the Bookworms.” He rolled his eyes scornfully, “they’ve gnawed right through the story lines of these tales over here.”

“What do Bookworms eat?”

“So, how do we feed them? What happens if they gnaw through the story lines?”

“One question at a time,” remarked Gutterick. “We feed them words from the non-fiction section, they’ve got words to spare over there. As to your other question… you’ll see in a minute. We’re going in here.”

Excitement and apprehension danced in Sarah’s body, as the little man guided her through the front cover of an anthology of folktales. For the briefest of moments, the air around her felt like dense liquid, then she stepped out on the other side of the portal.

They found themselves on a woodland path, near a charming, well-kept cottage. A woman’s voice could be heard singing from the lodge. They were no longer three inches tall, or else everything else was tiny too. Gutterick walked up to the front door and knocked.

The voice stopped singing. “Who is it?”

“It is Gutterick, my lady,” answered the Guardian, and his companion noticed a smitten note in his voice.

“Ah, it is you!” A beautiful, young, black haired girl shouted from the window, “the dwarfs have forbidden me to open the door to anyone. But it’s so good to see you? What brings you to our realm?”

“Bookworms, fair lady, nothing to worry about. Have you any tidings of my quarry?”

“None, at all. The five dwarfs will soon be home, perhaps they will know?”

“Unfortunately, it cannot wait,” sighed Gutterick to the girl in the window. “Good day to you, my lovely.”

As they left the cottage, Sarah turned to Gutterick, confused. “Five? I thought there were more.”

“Alas, there are two missing. The Bookworms have eaten their names, it’s the sort of thing they do. At least we know we are in the right story, and only minor damage has been done. If they had taken the Queen or Prince Charming, the story would be dangerously altered.”

“We must find the responsible Bookworms and capture them in this.” Gutterick pulled what looked like a marmalade jar from behind his back, as if conjuring it from thin air. “When they are all rounded up, we restore the stories.”

“How do we find them?” Sarah inquired, taking the jar the man was passing her.

“An excellent question dear,” noted Gutterick, without answering it.

They walked along the path for a while, before Gutterick exclaimed: “Ah, we’re on the wrong page!”

Then he bent down to the ground and lifted what looked like a sheet of gravel path and grass. He turned it over, and the scene changed. They were now in the courtyard of a manor house. A girl was crying by an old stone well.

“My dearest, Cinderella! Whatever is the matter?” Asked the Guardian, alarmed.

“Bookworms!” she bawled, “Bookworms ate my stepsister’s toes, so my slipper fitted her! She is marrying the prince as we speak.” The blond girl in rags howled in despair. “Don’t just stand there, Gutterick! Do Something!”

“Worry not, we’re on their trail. By any chance, did you she in which direction they went?”

Cinderella pointed in a vague direction, and Gutterick turned the page as he had done before.

“Oh, grandmother, what slimy skin you have!” Cried a little girl with a red hood.

In Grandmother’s bed was a creature Sarah could only assume was a Bookworm. It looked very much like an earthworm, but bigger and with teeth like a rodent.

Sarah didn’t know it would work, but unable to pick up the large creature, she turned the opening of the jar towards the Bookworm. As she had hoped, the creature was sucked in, shrinking in size on its way, until it resembled a little slimy sausage with choppers. It wriggled helplessly in the jar.

“Excellent work,” the Guardian cried, plainly pleased and proud of his apprentice. “The rest of the Bookworms will be nearby, no time to waste!”

Together they rounded up a handful of creatures, scattered on that page and the next. They caught the last one in a forest, where it was munching on white pebbles (thrown by a boy named Hansel to help him find his way home).

“That’s all of them,” sighed Gutterick with a grin, “Now, we most clean up their mess. Stand back! It won’t take long.” From behind his back he produced a feather quill, roughly the same size as himself. Then he scribbled and scratched until he was satisfied. He turned the pages and did the same thing on every page their had visited. Until at last with a joyful smile, he threw the quill down and sighed, “Done!”

“I must admit,” said Gutterick, as they made their way out of the book, “I didn’t think you’d be up to it, being human and that. But you have proven me wrong, I couldn’t have asked for a more apt apprentice.”

They were three inches tall again, making their way across the floor of the library to release the Bookworms in the economics section, when unexpectedly another three-inches-tall figure approached them. He looked pimpled and awkward and was carrying a scroll of parchment in his hands.

“Mr Gutterick,” stammered the youngster, “I’m Jesper. The Loremaster sent me to be your apprentice.”

A silence followed his words, then Gutterick turned to Sarah with a frown. “Then who are you?”

Sarah blushed again, but this time with embarrassment. “I’m just a user of the library!” She had very much enjoyed the night and had hoped perhaps – but no. “In the wrong place at the right time,” she squeaked, avoiding the Guardians gaze.

“It seems that I have made a mistake. Why didn’t you say?” Gutterick spluttered in confusion.

“I was having too much fun!” she cried. “Besides, I thought I was dreaming!”

“It’s been very nice to meet you,” Gutterick declared. “An excellent apprentice you would have made. If this young chap is half as capable, the stories shall be safe!”

Smiling, the Guardian presented her with yet another piece of mushroom. “Goodbye, noble student!”

Feeling sad, Sarah took the substance from his hands and ate it. She grew to what felt like much bigger than before, while the Guardian and his apprentice remained tiny. She could barely see them, as they scuttled away towards the children’s books.

The exit was locked and alarmed, and Sarah was never in a hurry to leave the library. She settled in an armchair by the window, where she would wake in the morning believing it had all been a dream.