Wailing at a Wall. 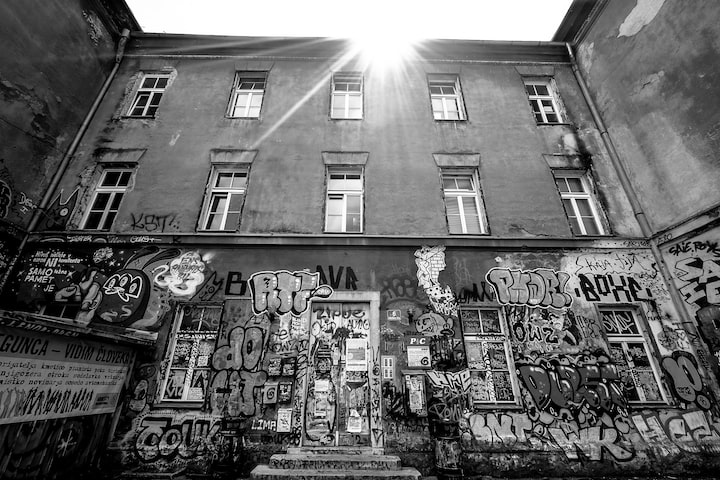 Photo by Francesco Ungaro on Unsplash

The sun sat fat on the horizon, gaudy and obstinate, burning with temptation. The ultimate harbinger of mainstream culture. Chief facilitator of manufactured joy.

Frankie stared out of her bedsit window and watched the hustles of people below her rage through the remains of the day. Each of them spurred on by capitalist propaganda disguised as wisdom.

“You only live once.”

“Life is too short.”

Her hackles were up. They were always quick to rise these days. A symptomatic reaction to the ever-flowing cesspool of absurdity.

Stop. She wanted to shout at them. Relax. You can have free time. You do not have to fill every moment of your day with something.

Leveraging humanity’s fear of death to sell more stuff was the most deplorable tactic capitalism had devised to date.

Sometimes it was all you could do when looking into the mouth of madness.

She picked up her mug of coffee and drained it of the last dregs. Her hands looked feeble and insignificant as they cradled the once cherished, turquoise, earthenware. They didn't look like the hands of a person who was about to forge their own freedom.

She put the mug down on the side and looked at it like a relic from a time she could barely remember. A time when she had cared about trivialities such as what style of mug to drink her coffee from. This beautiful mug with its glossy glaze, curved contours, and swirling depth of colour... meant nothing to her now. She put coffee in it. It was a receptacle. That was it. The joy it could add to her day... gone.

So much stuff seemed irrelevant. Usual necessities of life had been relegated to whispers at a rocket launch. Hunger passed unnoticed. Her jeans, once tight fitting, had grown baggy around her thighs. She pulled off her beanie and felt her matted mane of hair. It must have been a good week or two since she washed it.

Her misery had reached critical mass.

She could feel herself waddling under its weight. Her usual surety of mind... scattered. She felt tired... all the time. She was nursing an emotional and righteous succubus that took a little bit more of her every day. It clawed, it needled, and it scraped as it churned about within her, fighting for space. Anything that stood in opposition was cut at.

Desperate to be free of it she knew now exactly what she had to do.

Like all misery hers needed company. It wanted to get out into the world and let other people hear it scream.

She felt a tear salt up her eye

Her freedom hung in the balance.

To live again. To listen to the rhythm of the rain without it reminding her of sadness. To sit with friends and be present, undistracted. To read a book and be able to concentrate on the words. To listen to music that wasn't designed as an aid to sleep. To plan a future that held more than an escape.

She dabbed her eye with her shirt sleeve and focused on her breathing.

She was ready to do this. The sun needed to shift its brazen light into another part of the world. She wanted the night. She inhaled deeply and closed her eyes, a temporary escape to the darkness that she willed to arrive. Soon, she would slip out into the night's ever-receptive embrace, and there, within the comforting blanket of its unassuming shadows, she would create a schism of beautiful truth.

It would be majestic.

The backbone of the plan was location.

Like an estate agent for a hugely particular purchaser, she had hunted around the streets critiquing space after space. She knew precisely what she was looking for. Her misery's final resting place had to be somewhere that would benefit from its arrival. Become enriched by it. Be more because of it. In turn, the space had to compliment the piece. It had to encourage it. It had to offer a stage that would allow it to sing with all of its potential.

She settled on a wall at the corner of Tibb Street. A place notorious for scraggy tags. Alley cat art, as she called it. Sprayed about to mark a territory. Art created to cut into a world that the artist felt invisible within. A feral manifestation of a disenfranchised heart.

The artists of these tags would not mind her coming along and covering them with a piece. She knew, they knew, the world knew, that tags were fleeting. The marker of a moment, a piss up a wall, territorial but uninvested.

What Frankie's misery needed was on a much greater scale. She wasn't about to cast out the screams that tore at her in a two-minute expulsion of piss. She wasn't leaving a mark; she was excommunicating that which had wrung her soul out.

Every night for a month she had sat on the corner of Tibb Street. Watching her space. Visualising her creation, building it into a virtual reality. She knew this place more profoundly than any person who had ever walked through it. Her relationship with it had gone past the physical. It was spiritual. She knew how it breathed. How it moved under the rhythm of the traffic controls. How and when it would hold onto the shadows.

When it let the light in.

She knew who used the space for what and when. Who stood near it, who walked through it, and who abused it. This wall of hers lived a life of its own. Standing defiant through all seasons and all weathers. A landmark in a dirge of wasted journeys.

She thought about the tools and materials she needed to fulfil her ambition. She made lists, reworked them, saved up and stole. Changed her mind and did it all over again. She plotted her logistics; devising drop off areas to stash some of her gear so she didn't have to carry it all at once. The schlepp across the city was heavily patrolled. Cameras were everywhere. One bag was all she could afford to reasonably take before she got stopped and searched.

She had timed every detail of the night ahead of her. Minute by minute. Some of it second by second. She knew precisely what had to be laid down first, what would come next and exactly how long the finish would take. She worked it over and over until she was certain she could get it done before the judgement of dawn.

Before the early birds circled... looking for their worms.

She looked at her bag as it sat expectant by the door. An arsenal of organised paints and tools ready to be deployed. It was 7pm and the sun was finally softening.

Frankie pulled on her coat. It wasn't cold but it would be later. She pulled her bag onto her back and practised walking as though it were a feather rather than a deadweight. She needed those who saw her travelling to pay her no mind whatsoever.

She had got this.

Frankie was aware of the punishments that could come her way but the big sticks of law and order offered no persuading deterrent. She was already in a prison of her own making. Any other sentence felt much lighter in comparison to the one that she had given herself. Besides, she was no longer in control. This was happening. It was coming. There were no defences in the land that could stop it.

Tomorrow, the day would break, morning radios would crackle with the regular chatter from a world with misaligned gears. The grind of a thousand meaningless messages would deafen the uninterested and amongst this cacophony of inconsequence, there would be a new stabbing voice.

For it would no longer belong to her.

Through the streets she walked. Her weaponry on her back and her line of sight singular, and clear. The twilight encouraged her, greeting her like a beloved friend. Her feelings of exposure calming with each degree the sun waned.

She arrived at her space as the sun entered its final stage of melancholy. Its swan song of malevolent sepia slowly pushed away from the skyline by the cold insistence of night.

She crept into the stairwell of the neighbouring multi-storey car park and sat under the concrete stairs and prepared. The smell of stale piss and last night's vomit her only company. Nobody would expect to find her there. Nobody would look.

Then, when the night had secured its hold, she stepped out and wailed at the wall like a silent banshee.

Her arm swung in rehearsed rhythms. Flowing and uninhibited. Colours cascaded. Images bloomed and intertwined building in anthropomorphic vascularity. Her demons surging from her, grasping at their new space.

The noise of the city pulsated behind, around, above, and below her. An industrial track that coursed alongside the steel in her heart. She danced with it. Her body swift and agile. The biting tags of another artist’s fleeting disdain glossed over. The changing traffic lights ticking away the time like a visual pulse.

She had done this piece so many times. In her sleep, in the shower, whilst talking with friends.

There would be no error here.

This great misery of hers would be given justice.

She had sketched, drawn out, changed her mind and gone again so many times. To see it there, larger than she, larger than any piece of paper that it had previously manifested itself on. To see it as it was meant to be.

Well... It nearly made sense of the pain.

This creative life of hers often felt like a curse. She wondered why people coveted it so much. She spent most of the time living as a tortured soul in a smoking gun world. Forever out of step. Living life in the spaces and shadows between constructs and ideologies. Never fitting in. Incongruent. At odds.

But then, moments like this would remind her that the pain she felt was not an indelible purgatory. She had the ability within her to create a ticket out of hell. She could stand on a street corner and stare at her screwed-up notions and feelings and see them staring straight back at her with a meaningful gaze. And sometimes, like now, still wet from its birth, her creation could even talk back at her.

It was all good. It was outside of her now. It could say whatever it wanted without hurting her.

Her body began to decompress, her hackles lay down and an ache warmed through her muscles where rigor had departed.

She stared at her misery, alive on the wall. It stared back, cocksure and eager, ready for the dawn. Ready to punch into other people's consciousness. It was all good. It had its own purpose. It was free to do what it did in its own way...