The chaotic process of making a culinary miracle 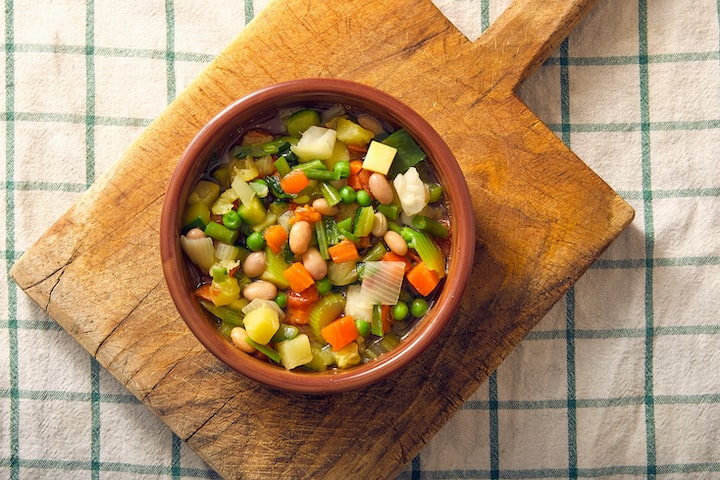 Photo by Gianluca Gerardi on Unsplash

“Carrots, peas, red pepper, and - what else is in the fridge? - oh yeah, onions, garlic, spring onions maybe? Could put kale in too…”

A stream of muttering drifted from the kitchen amidst a plume of steam. Through the vapour a plume of brown hair was visible, rumpled and pushed vigorously to one side as its owner attempted to read the crumbling paper.

Vulgarities seasoned the burned vegetables. Smooth hands frantically grabbed a spatula and attempted to lift the crusty onions from the bottom of the pan. Only when boiling water was sent cascading into the saucepan did the onions concede their grip.

“Right, okay, it’s fine, it’s fine,” they mumbled, alternating their reassurances with other whispered swears. This undercurrent of noise accompanied peppers beginning to sizzle, joined carrots thudding into the saucepan.

Soon, all the vegetables were added. The frazzled chéf stood back, pushed their hair away from their face and breathed a sigh of fear. The vegetables were in; the water was simmering. Now the next task was simply waiting. Or was it?

“Oh my God, the seasoning!”

A tub of unlabelled seasoning dropped onto the counter. Its glass case rattled a little as it settled, drawing Charlie’s attention away from their pile of vegetables.

“Huh. Never seen you before.”

They grabbed the pot, cracked open the lid, and made a motion as if to throw a pinch into the soup. Before they could move further than an inch the scent of the spice stopped them dead in their tracks. Spice, and coal, and petrichor; scents that came with texture; the feeling of being under a blanket in winter, getting a ‘flu shot, and sleeping whilst a candle burns low.

“Yeah you’re definitely going in the soup,” Charlie decided, lifting their suddenly heavy hand and upending the jar. Despite the lid being entirely off, a trickle of sand was all that entered the bubbling saucepan.

Underwhelmed, Charlie chucked the pot back into the cupboard. They had no time for strange seasonings that had solidified in their jar. The soup was their priority. The spoon was in, the pot was simmering, nothing was burnt or ruined (yet). All they had to do now was stir occasionally and wait. So naturally, Charlie went on their phone.

“Boring, dull, not interested, stop showing me the king, that’s a spoiler, that’s an advert…”

Charlie narrated their news feed whilst idly stirring with their other hand. In their head, they were talking to their cat, who used to sit vigil and watch every time Charlie started cooking. Once or twice Charlie had tripped over the fluffy obstacle, but largely the pair got along quite nicely in the kitchen. Elton would yell at the top of his lungs until given a crumb. Charlie would scold the cat for his disobedience, then sit on the floor with the cat in their lap until whatever was on the stove bubbled over, or their timer went off.

Frantic swiping took Charlie’s other hand off the spoon. They were navigating too many apps, a brand new phone, and too many thoughts cluttering inside their head. Finding the clock app was a two hand job.

The spoon continued to stir, gently rotating as if caressed by invisible hands. Charlie was too busy fighting the ‘UPDATE PHONE’ notification to notice. If Elton had been there, his yowling would have set the distracted chef straight, but for the past few weeks the house had been eerily quiet. At night there were no cries for attention, no gentle thumping as paws trotted downstairs hunting for their owner (and a second supper). The only sound in the house was occasional, gentle sobbing.

Timer set, Charlie returned their attention to the pot. The spoon - undeterred by the sudden attention - continued its rounds, seemingly getting faster the longer that Charlie watched.

Perplexed, Charlie reached out to stop the spoon in its tracks. To their horror it passed straight through their palm, speeding up evermore. Unseen hands clicked the dials on the hob onto full and Charlie’s twenty-minute timer started to scream shrilly, ended far too soon and protesting in alarm at the strange happenings.

Charlie, to their credit, didn’t run screaming from the haunted kitchen. They dumbly tried to grab the spoon again, failing to realise that this would not bring back the corporeal form of the cutlery.

After seven frantic circuits, the spoon stopped. It swirled wildly in one place until the handle pointed firmly towards the back door. True to dramatic fashion, the back door slammed open with an accompanying burst of wet leaves. Contrary to Charlie’s expectations, the doorway was empty; no hulking figure backlit by streetlamps, no masked murderer posing before their killing spree. Just leaves.

“Your soup is done,” something announced from behind them.

Charlie screamed and spun around so quickly their socks slipped on the tiled floor, sending them careening backwards like an ice-skating deer. To their horror and relief, a hand grabbed their wrist, settling them back on solid ground.

“Careful. No upending soup,” a stern voice chastised them.

Charlie’s eyes finally took in the hand that was holding their arm in an iron grip. Clawed fingers, leathery, crimson skin. The arm was an even deeper scarlet and was well-muscled, veins protruding all over. Veins were visible on the torso, as well; a shirtless, red being was in Charlie’s kitchen. A shirtless being with pierced nipples that had little skulls covering the areolas.

Politely, Charlie didn’t stare. Instead they focused their attention on the strangely thick neck, the crisp goatee, and the soulless eyes that stared down at them judgmentally.

Wordlessly, Charlie nodded. Their wrist was released, their balance was found, and they groped blindly for the cutlery drawer.

“And stab the Devil? Stab Satan? Yeah, don’t do that buddy,” the Devil interjected. “Just get a ladle and a bowl. I’m only here for the soup.”

Charlie whimpered and threw open the drawer. Or tried to, anyway; the awkward shape of the ladle caught on the surface and kept the drawer partially closed.

After a few moments of panicked yanking, there was a soft snap and the drawer slid out smoothly. The ladle followed suit, depositing itself in the saucepan and giving one final, gentle stir.

“Now, where are the bowls?” the home intruder asked.

Charlie nodded towards the correct cupboard and the Devil clicked again. The door swung open and two bowls drifted onto the countertop. The cheap plastic ladle, melted by months of Charlie’s failed cooking experiments, began to distribute the soup.

Once the bowls were filled, the visitor took one in a gnarled hand, sipping from the side animalistically. Charlie watched with grim fascination as the bowl was drained, the second bowl was inhaled, and the pot was steadily emptied of their lunch.

At last - with one serving remaining - the Devil seemed satisfied. It put the dishes into the sink, turned on the hot tap, and folded its arms, staring at Charlie with no discernible pupils.

“I… I’m sorry?” Charlie stammered, still in shock from the events of the past ten minutes.

“Your reward. For soup. What do you want?” the Devil asked again, increasingly forceful. “Money? Women? Men? A new house? Power? Giant box of donuts? I can give you anything.”

“My cat,” Charlie blurted. The Devil raised an immaculate eyebrow. “I’d like my cat back, please.”

The Devil considered this proposal. Did cats go to Hell? Was there a Hell? Could it reclaim a dead feline for this terrified human? Probably.

“Sure. Open the back door at midnight,” the Devil instructed. “He’ll arrive then.”

Charlie’s heart seemed to swell with hope, but they had read fairytales and horror stories, they knew there was a catch.

Confused, the Devil cocked its head. “Why would I want your soul?”

“Because you’re giving me something. It’s always a trade, right?”

Charlie was feeling more confident the more they spoke. They knew their rights, they’d done an online class on the occult. They weren’t going to be tricked by Satan, not today.

The syllable rang out around the kitchen. It took Charlie a few seconds to process.

“Soup. You gave me good soup.” The Devil shrugged. “Trade done. Your cat returns at midnight, a kitten again. Look after him. I will come back for more soup in fifteen years.”

With that final proclamation, the back door swung open once again. A small tornado of leaves and debris spun into the room, buffeting Charlie’s face so they only got one final glimpse of the Devil leaving the same way it had entered: through the broken cat-flap.

Once the Devil had left, the kitchen returned to its natural state. Old cat hair on the mat, a dead spider behind the cupboards, the unnatural humming of the fridge. Charlie took it all in, reassuring themself that this was in fact their plane of existence, and that even though the Devil had been in their kitchen, they were still in one piece.

Trauma repressed, Charlie got a bowl for themself and poured out the final portion of soup. By now it had cooled only slightly; the Devil had been supping it hot.

One tentative spoonful later, Charlie could see why Satan had visited.

More stories from AJ Birt and writers in Fiction and other communities.