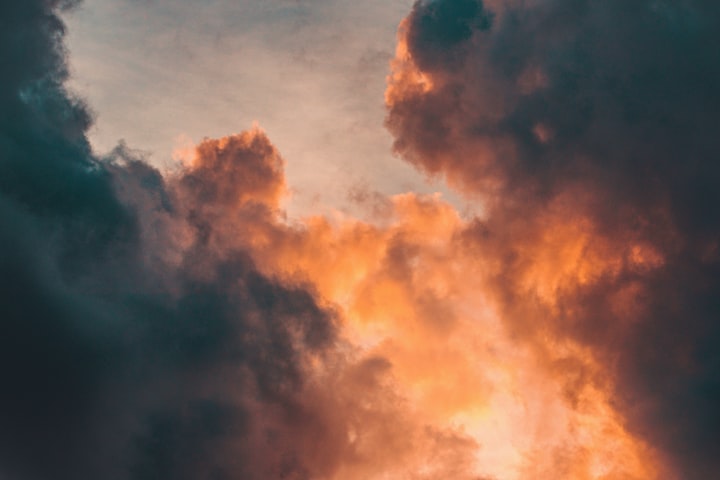 Photo by Jason Wong on Unsplash

There weren't always dragons in the Valley. The sky wasn't always gold. The fires from the breath of the dragons had altered the valley's horizon. The transformation had occurred while the inhabitants of the valley slept.

Annon had thought it was a dream. Lying in her hammock, she had seen the huge creature. A wing over her, she feigned sleep. Then froze in shock as it's fire breath of orange and red twirled through the sky, producing a backdrop of gold. Swirls filled the usually orangish sky with gold designs.

Annon awoke to a crazed valley. The dragons were o longer flying through the sky, but the shimmery gold remained. The masters were casting spells, hoping to remove the glittery gold. Annon struggled in her conflict. She was not a lady of position. It was not her role to explain the magic of the dragons. The people of the Valley cooked with fire every day, but this had never happened before. How could she explain what she had observed and not be brushed off, as a foolish woman? She would not be laughed at, she would just be ignored. She chose to ignore what she knew and left the masters to figure it out on their own.

The three dragons had settled at the edge of the Valley. No more fire breathe they silently slept.

It got to be a routine, at night the valley slept, as the dragons watched over them, breathing fire and circling overhead. the masters no longer searhed for the correct spell.

And then all of a sudden a strange thing happened. The sky began to shed golden drops. Everybody stood and watched. The droplets were warm when they touched the habitant's skin. Annon smiled. Her skin felt so soft. She, covered with oil from the drops, went and found one of the male massagers. It was her first time, but she knew it was the right time. The man would not be bound to her, it was after all her first time. A bound woman needed to have more experience.

She had seen her massager before. She could have requested another if she had wanted. She would see three or four before it was time for her to be bounded. He was wearing shorts and a loose shirt, He was covered in what she assumed was oil from the golden drops. There were no words of introduction or explanation. She followed him to this soft patch of earth. A circle that felt soft on her now naked skin. She lay on her stomach and he sat on her buttocks and the massage began. She felt the world float away. it went from cracking her back , to a soft draining her of energy sensation. And then all of a sudden the message changed again, reviving her energy and filling her with excitement. He was done moments later.

Her people of the valley taught that this practice helped a woman learn about their bodies. Annon did not feel like she knew her or her body better. She was amazed that her body could feel so many wonders and was curious what else she did not know about it. What else could her form experience?

The golden drops had stopped falling. Her skin was softer, her hair was like silk. He had brushed it as part of the massage after he had rubbed her scalp. She felt awakened and like she wanted to experience more than she had been experiencing in her life in the Valley. She wondered about the dragons, what was their purpose here, what was anybody here's purpose? here. She felt more whole as if her dulldrum routine might change. The warm air felt more invigorating than usual. When would be her time to go back to the massager. Would there be more golden drops? The respected women in the community did not openly make a habit of going to the massagers. She knew it would be several months until she returned.

More stories from Antoinette L Brey and writers in Fiction and other communities.