From Lips as Red as Roses

by Emily Marie Concannon 2 months ago in Fable
Report Story

Honey in the Apocalypse 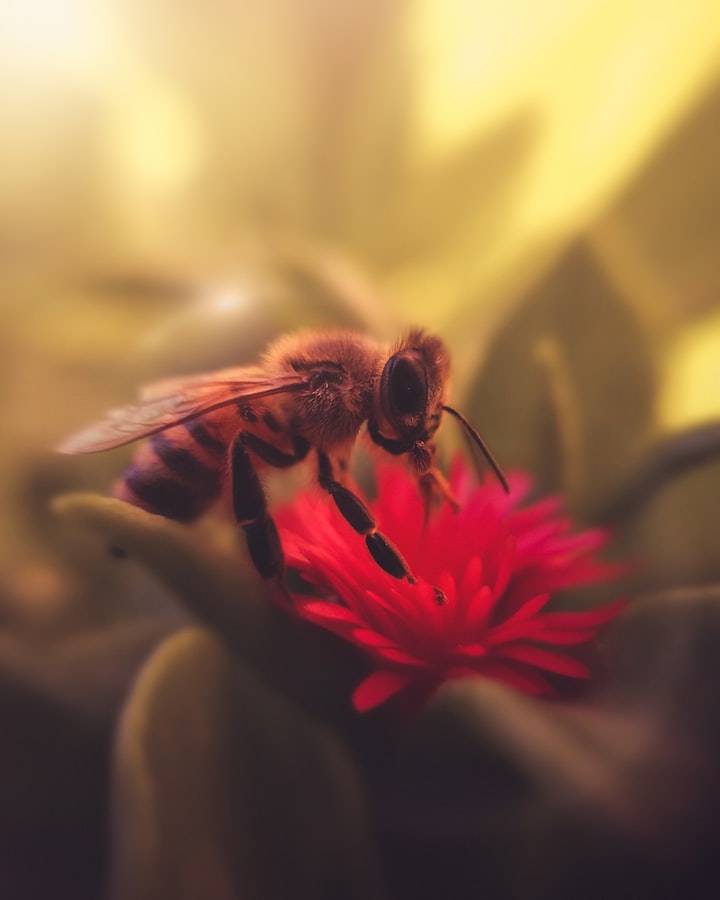 Photo by Esteban Abalsa on Unsplash

The lips of the goddess of love dripped down into the Earth. This binding power of love brought life from the deadness below. From it we came, us the bees, arose from the redness of her lips and they pressed against the dead Earth. This is the story of how my world came to an end.

The nectar was always the sweetest in the summer. I remember how sweet it was, and how my mother would leave early in the mornings to gather it for me. She always seemed so delicate, magical, and had a special glint in her eyes as she gave it to me.

Her proboscis would nuzzle me in the morning as I rested in my pupa stage so that she could feed me the sweet juices. It made me feel strong and powerful and I understood why the gods would hoard it for themselves on Olympus. Only with us, the bees of the field, did they share this sweetness.

Yes, the butterflies and other insects could gather it, but only we knew the secrets of how to turn it to gold. Only the bee kingdom builds elaborate hives and cities to store this treasure and nourish their young on its strength.

That all went away, though, one fateful day. I remember it well. I was no longer a pupa and had joined my hive in the task of gathering the nectar to be made into honey. I was a young bee, but I was also a proud bee. I was a bee, this was what I was born to do, and I loved it.

When the monster came, however, we lost everything. This monster we call the roarer, and they were a massive cloud of brown with sharp objects in their mouths. I do not know what humans call this beast, but for us bees, when we see one coming to us, we know it is the time of Armageddon.

She tore our kingdom to pieces. She tore out every comb and drank our honey to satisfy her empty soul. She consumed every single child and destroyed our Queen. The Roarer killed every bee in my hive and consumed the nursery. As I fled the destruction after fighting the Roarer for hours, I saw that I was alone in the world. I was no more.

The honey was gone from us. The sacred substance of the gods, which they shared with us to keep and cherish, was gone from my hive forever. I wandered the Earth, consuming nectar as the butterflies do, and sensing the Sun above me. The Sun was my only companion now.

“….Used to anoint him with ambrosia, as if he had been born of the goddess,”

The words of the Mighty Poet Homer came to my mind as I fluttered about aimlessly through the pasture lands and back countries of the Mountains. I watched the sun burning red on the setting horizon. I felt cold as I struggled to curl up on the flower where I rested.

The Apocalypse of my people was over. And, I was alone in the world. But, as I watched the sun that evening for the last time, I realized how peaceful I felt. The shadows spread over the landscape and the Earth was a little more lonely than it was before, but we still had the memory of the sweeter times. It would always live within the flowers of the fields.

This was the end of our world, but it was not the end of the world, I realized as I felt the coldness overtake me. I still have the sweet memories of honey and nectar, though, the best flavor of summer. The food and drink of the Gods and Goddesses.

I've always wondered what the world looks like through the lens of an insect. How a bear, wolf, or human might look? Perhaps they blend together and are seen simply as a threat.

In this story, I wanted to share one of my all-time favorite summertime foods, honey. But, it's so much more than this. Honey was seen by many cultures as a form of life. A sacred substance that fed gods and men alike.

Having been raised in a culture that emphasized the reality of the Apocalypse, I wondered if other life forms have their own perspective of the end of the world? This is what I believe the end of the world is like for a small little bee. I hope you enjoyed it! :)