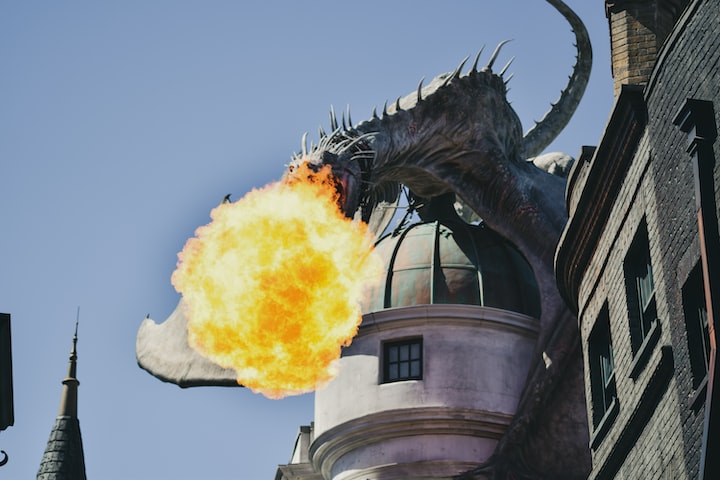 There weren’t many dragons in the Valley. They had been leaving in droves or dying just out-of-blue. It was worrying how quickly they were disappearing because they kept Thorncliff Valley safe. Who needed the authorities when you had dragons to keep you safe, in other words, why reinvent the wheel?

Aragorn Sagebash sat on the front doorstep, drinking a brew of Sagebash, an orange-type warm drink. It wasn’t as cold as what it was meant to be but given the temperature drop and the fast-moving storm clouds, something was happening.

“Gorn,” a female voice called out.

Aragorn’s nickname from Alethia. She lives down the road, next to the entrance of the forest. Her family have been nurturing some dragons up in the mountains.

“Have you been told about the storm that is coming?” she asked, pushing the broken gate open. “And what are you drinking? I can smell it from here.”

“Hello,” Aragorn said, taking a swig from his cup. “Yes, I am aware of the incoming storm. Are the dragons fine up there?”

“I don’t know,” Alethia said, taking the liberty of taking a whiff from the cup. “Mother hasn’t even told me about anything yet. I supposed she thinks I will get intel from the authorities. Do you think the authorities are purposely killing the dragons just so they can swarm in?”

Aragorn laughed. “I doubt it, the dragons won’t let that happen. They’re dragons.”

“Their race has been at risk for centuries,” Alethia said, knowingly. “And they have protected us for even longer.”

“Well, other than being a conspiracy theorist,” Aragorn said, taking another swig. “Have you done anything else with keeping the authorities out?”

“They will keep pushing through,” Alethia said. She looked over her shoulder and saw something mechanical fly over. “What’s that?”

“It’s from their world,” Aragorn said, flatly. “The authorities will be spying on us with their drones.”

Alethia took out a bow from her shoulder bag and her arrow. She took aim at the mechanical weaponry and shot at the thing. The whizzing sound of arrow flying through the air, hit the drone, dead on point. Aragorn laughed when the drone fell to its death, on the muddy road.

She pushed past the gate again, running to the path where the electrical mess ended up. It was still making a wheezing noise, spluttering. She reached out and touched it, almost instantly retracting her hand from it being too hot.

“What do we do with the evidence?” she asked, turning round and looking at Aragorn for some support.

“Take it to Eryx,” suggested Aragorn. He took the last sip of the drink and threw out the residue. “He’ll know what to do.”

“Do you have anything I can carry this in?” Alethia asked, trying to pick up the burning mess.

The drone must have been a cheap version of a real thing to be burnt out with one forceful bow. Sometimes those authorities have all the money in the world but would resort to something cheap, when spying on the alternative world. Cheap items result in limited spyware material. Aragorn smiled at Alethia. She can be cute when she wants to be.

Within a couple of minutes, the burning mess of the drone had cooled down. Once Alethia was able to inspect the drone, it was obvious that it wasn’t drone as such but something else. She picked up the mess and together, the two, took it down to see Eryx who lived in a small house on the border of Thorncliff and Thornsea. Both valleys who were endangered by the authorities. They were well and truly out to obliterate these alternative worlds.

Alethia’s mother, Aurora, waved the two as they walked past Alethia’s. They had to walk past most of Thorncliff to get to Eryx’s. Eryx was a human form of a dragon. He was close to six foot seven, bulky, black hair, green eyes, didn’t take crap from anyone. That’s why Eryx was appointed the gatekeeper between the two valleys.

“Eryx?” Alethia asked, barging in through the wooden gate. It creaked on its hinges.

Eryx wasn’t anywhere to be seen, sitting in his chair, on his veranda. Nor, was he even in the kitchen, his next favourite spot.

There was nothing from him. Until, Aragorn heard him in the back of his house talking to someone in uniform. It was an authority person.

“Eryx?” Aragorn asked, knocking on the back door.

He looked at Aragorn and ushered him and Alethia away. Whatever was going on, it seemed important and almost like hush-hush. What was Eryx up to? He had suspicion written all over his face. Aragorn felt a little uneasy about this situation and it didn’t help that the incoming storm was sending electricity all over the place. The smell of burning rubber fulfilled the air. The unnerving vibe that anything could happen at a drop of a hat was intense. The spyware that Alethia had shot down, the killing of the dragons, Eryx talking to the authorities – what is happening?

Without any hesitation, Alethia nudged Aragorn with a slight punch to the forearm and gestured that he looks up towards Mountain Rock, one of the caves where the leader of the dragons resided. Attor lived in a cave on the side of Mountain Rock. He was one of the biggest dragons that had ever lived in Mountain Rock, close to eleven feet. The incoming storm had started, sending bolts of lightning in all kinds of directions, but mostly aiming at Mountain Rock.

“Are there any conductors up on Mountain Rock?” Alethia asked. The two were watching how the storm was easily manipulative. Was this even a natural storm?

“I have no idea,” Aragorn shrugged. “Then again, this all smells suspicious.”

“It could be the authoritarians,” Alethia suggested. She looked back over at Eryx. “What if those authoritarians talking to Eryx, is a distraction so he doesn’t see the incoming storm manipulating Attor. Surely, that storm is doing some damage to Mountain Rock.”

“We have to be confident that Attor and his family are coping up there,” Aragorn said, confidently. “But for now, while Eryx is aware of the authoritarians here, we should really keep the evidence safe. We should head back.”

The decision to leave was rather too late since there was a thick tap on Alethia’s shoulder. The two of them stopped in their tracks and looked behind them.

“What are you two doing here?” Eryx boomed. He had both of them in each hand, clutching their collars tightly. “Did you two not hear when I said there was an incoming storm?”

“About that…” Alethia said, slowly. She felt the grip on her collar loosen.

“About what?” Eryx asked. He looked over his shoulder to see the authoritarians disappear down the muddy road towards the portal back to their world. No-one dares to go there but they dare to come here.

“We found this,” Aragorn said, producing the box with the broken mechanical device. “We believe it’s them spying on us.”

Eryx looked down at it. It was something he had never seen before. “I have never seen one of these before.”

“I have,” Alethia said, brazenly. “And they seem to fly around when the authoritarians have come to visit. It’s like a spy mechanism that they release into our world to get a better sense of who we are and what we do so then, they can come back when we are asleep, bring back the device, and then conjure up something to try and take over us. That’s why they were here, yeah?”

“They spoke to you now because of the incoming storm, right? Their barrier to completely take us over is to kill Attor and his family. They know Attor won’t accept defeat,” Alethia continued. It just kept blowing out of her mouth.

“This is not true,” Eryx said, gritting his teeth.

“I think it is,” Alethia said, still a little cocky about her findings. “Because if it wasn’t then why are you gritting your teeth?”

Eryx’s temper looked like it was rising rapidly. Aragorn nudged Alethia to quit it.

“Tell us why they are frequently here, then?” Alethia was on a mission.

“It’s not what it looks like,” Eryx said, silently. He turned around and walked off towards the fence. “There’s a reason why our dimension has been shaken about and why the dragons are dying off like they are.”

“Enlighten us,” Alethia said, arms folded. She looked at Aragorn for support.