For the Sake of Clarity

by Sterling D'Este 5 months ago in Short Story
Report Story

And Other Impossible Things 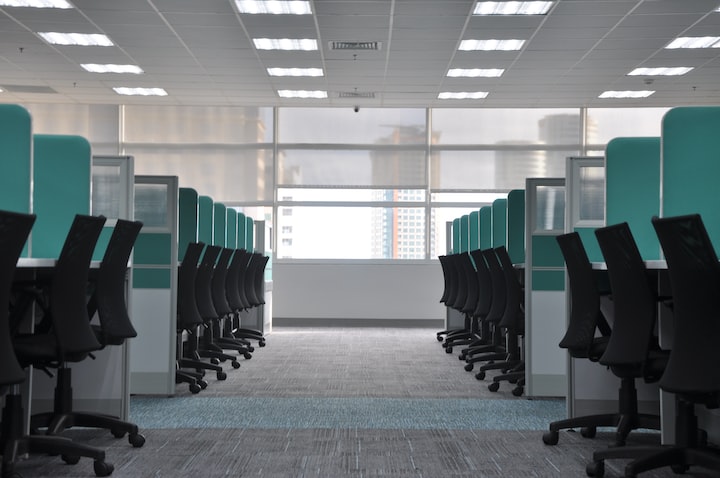 Photo by kate.sade on Unsplash

I saw the real world for the first time yesterday, sitting in a cubicle underneath a window that showed very little other than the dirty Manhattan skyline. I was slogging along, punching in numbers and numbers and numbers, the click click click of my ordinary keyboard adding to the general drone of office noises. Here and there, the squeak of an old desk chair or the demanding howl of a phone accented the low thrum, but these did little to distract me from the post-lunch work fog. It was all nothing but premiums and percents and this or that insurance claim when a vine, crimson and black and gleaming in the fluorescent lighting, climbed over the top of my cubicle and proceeded down the side nearest to me. It was slow but purposeful and tentacle-like in its movements, its red leaves and thorns rustling slightly as it went on down through the cords and sockets and desk legs and office detritus. I realized I was shocked into staring when it reached the first wheel of my desk chair, so I did the one sensible thing there is to do when something is wrong in the office: I went to IT.

It was a short walk from the cubicles to the cave-like rooms where the technicians were generally found when not peering wet-eyed beneath desks or into copy machine depths. I held my breath upon entering—the dim lair was, as always, somewhat musty, as though the warmth blown out by computer fans gave rise to the growth of more organic processors.

“Yeah?” Was the only greeting I received; I wasn’t really expecting anything more coherent. The one-word salutation came from a balding man in an ill-fitting pair of slacks, his grey buttons still dusted with whatever he’d eaten for lunch. The ID hanging from a lanyard around his neck read HICKS, TERRY.

I gave him my most winning smile. I have great teeth; everyone says so. “Will you come take a look at my computer?”

Terry sighed but stood anyway, showering his keyboard and the floor beneath his desk with little pieces of food that would eventually become more warm must. I kept the grin plastered to my face. If he saw my disgust, there was no way he’d help me as quickly as I wanted him to. The key now was to get back to the main office floor before I breathed in too much more stink. Terry followed, though slower than I might have wished.

“Now, what’s the problem?” he asked back at my desk and seated comfortably amid the trembling vines. He peered at my computer through rheumy eyes.

“Er…” I started lamely, struggling to come up with a justifiable reason, “I’m having trouble getting Excel to open this big spreadsheet.”

I hardly noticed when the thin man grumbled. From my new position standing behind my desk chair, I could see the poisonous plant spread throughout the main office floor, curling around desks and chairs and tapping feet and typing hands. I shuddered from the horror of being chained to a desk by a groping, thorned vine. What if it didn’t let go at five, and all these people were stuck at their desks through the weekend?!

There were a few cases of insanity in my family, but I had always been a pragmatic sort. What decided whether or not someone went mad? Had the stress finally gotten to me? Had I snapped? True, I was a little old for a diagnosis of schizophrenia. (Weren’t most people diagnosed around twenty, not thirty?) Imagine having to live in an asylum. Good luck getting married now—

“Whelp, that should do it.” the IT guy said and pushed back the desk chair with a grunt. He moved to stand up and put his hand on one of my vine thorns, and—you’re not going to believe this— he yelped like a struck dog. “Careful. There was a tack there, and I must have gone and pushed it onto the floor.”

On his palm welled a single tiny drop of shining blood.

In the end, I took the rest of the day off. The supervisor grumbled a bit when I told him I’d been having issues with my ‘health’— “After all, you’re only thirty”— but what sane human could bear that? Obviously, I needed a nap. A nap, a soothing cup of tea, and maybe a bubble bath.

Resolutely I ignored the steady stream of oddities I saw on the way home, suddenly cluttering my city when just this morning there had been none. A man walking a flea? Perfectly normal. A handful of magpies dressed as businessmen? What’s different there? And everywhere, sometimes subtle, sometimes crawling, taking, grasping, was the thorn-encrusted vine.

Humans are, generally speaking, creatures of habit, so regardless of the ridiculous events of the day—and after a few blissfully uneventful hours in my cookie-cutter suburban home— I was dressed and ready for a date when James arrived to pick me up. Somewhere along the drive home, I resolved to keep my sudden lapse of clarity to myself, but I kept a close eye on my boyfriend on the drive to the restaurant. Unfortunately for my prognosis, he did not seem to see the small, winged children playing hopscotch on top of a long line of vehicles stuck in traffic heading out of the city, and he didn’t even blink when we pulled up to a red light next to a roach driving a taxi.

When we arrived at the only restaurant we ever ate at, our usual waitress—a beautiful young woman whose hair, I noticed for the first time, was a mass of twitching, tabby-furred cat tails— brought us a light White Zin, our typical choice for wine, and James began to tell me about his week.

I’d been dating James for almost a year at this point. I could trust him, right? I mean, he knew me. But would I believe me?

“Until today?” He sounded puzzled.

“Well, today I was just sitting at my desk crunching numbers when this red vine climbed over my desk and curled around the other workers’ hands and feet and chairs on a Friday and pricked the maintenance man!”

“That’s nice. Did I tell you what my office manager told Sandy the other day? Well, he…” Had he even heard me? But then the main course arrived, and it was too late to ask.

I tried again when we reached the park for our typical Friday evening stroll, doing my best to ignore the bi-pedal dog throwing a ball for his barking boy. “James dear, I think I’m seeing things.”

He smiled down at me, his eyes benevolent with food and wine, assuring me that not a thing was wrong. It was about then that I noticed something wrong with his ear. Slowly, with wiggling, writhing effort, a thin gray-pink worm pulled itself out of his canal and dropped to his shoulder, followed by more and more of the slimy, faceless strings. I yanked my hand from his and stopped, fighting nausea, but he kept walking and whistling.

I had the sudden, absurd thought that if I stopped right now and screamed, James would go right on strutting through the park. If I turned and disappeared, nothing in his world would change. Nothing in the whole world would change. I was the only one alive who could see things the way they actually were, and not a person would believe me. I had never felt so lonely, so invisible.

I screamed James’s name—he kept walking and whistling— and looked around. There was a shadow creeping up behind me, and behind it, there was nothing at all, no park, no twinkling city lights. Was this world even real, or had it all just been in my head until I realized what it was and, by knowing, destroyed it?

I sped up, suddenly sure that I did not want to be anywhere near that shadow, but as I tried to move faster, a gulf of space started to widen between me and the whistling James. He moved effortlessly, seemingly no faster than he had been when I was strolling alongside him in a gentle post-feast plod, but I fell farther and farther behind. Soon I was running, panting as I tried to make my desk-softened body escape the nothing. It was on either side of me now, blocking out my vision of anything except James, his broad shoulders relaxed, his hands in his pockets. The gleaming red vine slithered from the nothing and curled around my ankle, pulling me down. Everywhere the darkness touched me, I was numb. Hopeless, I reached out and

Monday afternoon, I was slogging along, punching in numbers and numbers and numbers, the click click click of my ordinary keyboard adding to the general drone of office noises. Here and there, the squeak of an old desk chair or the demanding howl of a phone accented the low thrum, but these did little to distract me from the post-lunch work fog. It was all nothing but premiums and percents and this or that insurance claim when, with a careless shift of my mouse, I pierced my thumb with a tack. I wasted a few minutes looking for it on the floor below my desk—I wasn’t about to put my foot on it next— but no luck. Wherever I had pushed it, it was nowhere to be found.

On my thumb was a single dot of gleaming crimson, and for a moment, I wondered. There seemed to be a memory on the very tip of my brain. Alas, it was probably nothing. I sucked the blood from my tiny puncture and turned back to work. There were quotas to meet, after all.

Writer and animal lover. 4 times self published author. Find out more are LSfables.com