A grieving young man runs away from home and follows a santelmo. 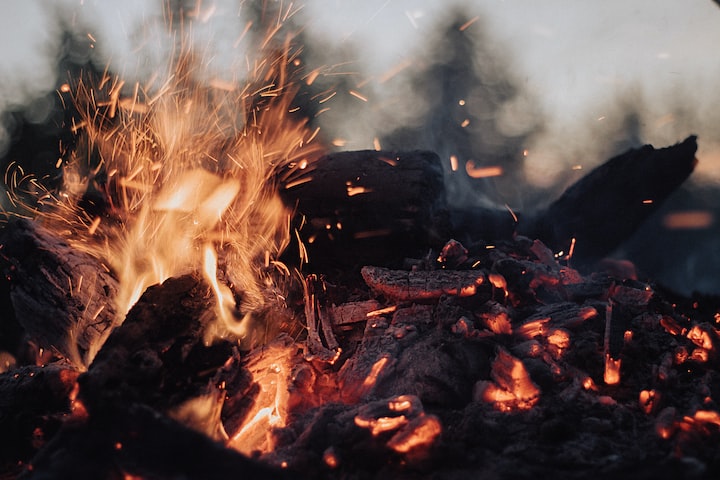 I followed the lights once, when I was a child. Lola had told me the stories, of course, but when do children really listen? The lights were there every night, up along the mountains, in solemn procession until sleep would claim me. Santelmo, people said they were called, and whenever I tried counting them, I would doze off before even making substantial progress.

On the night Nanay died, I ran out toward the lights, screaming for them to give her back. Someone grabbed me, and someone else brought out their slipper and punished me for my outburst. “Don’t give your Tatay grief! Can’t you see he’s already suffering enough?”

But I just wanted my mother. What was wrong with that?

Every night since, the lights seemed to grow closer, though I dared not leave in fear of being once more disciplined. It wasn’t until many years later, after Tatay had remarried and I’d been roped into some dumb scheme by one of my stepbrothers, that I simply just decided to leave. I had to know if they’d taken my mother.

I fancied myself a hero on an adventure, rescuing a maiden fair and fighting hordes of evil creatures with finger guns and made-up spells. Though deep down, really, what I felt was anger. Did Nanay abandon me? My father had been a gambler, obsessed with his fighting cocks, and he would stumble into our small hut drunk and howling night after night. My stepmother took care of me only because of him, but all the care she ever showed me was the bare minimum. I wanted my mother back so she could set things right. After all, wasn’t that her job?

I wrapped a bandanna around my forehead and stalked off to the fields, to the direction of the lights. I didn’t have a spare shirt so I couldn’t change out of what I was wearing when a torrent of rain poured forth, and I had to scavenge food from the trees and plants along the way.

I’d been tempted enough to turn back when one of the lights appeared on the horizon. To this day I couldn’t remember what it looked like exactly; it seemed to shift from one shape to another like it couldn’t make up its mind. It radiated with warmth, but instead of wanting to curl up and go back to sleep, my energy was renewed, and I longed to chase it, to touch it, to feel its heat wrapped around me. But it remained out of my reach no matter how fast I ran, and when I tried to trap it in an empty softdrinks bottle I found, it hovered teasingly over the opening before letting out a shrill, piercing noise and scampering off.

I followed. For hours and hours. Maybe even days, though morning never once broke. We talked as we traveled, in a strange language that I could inexplicably understand; I told my guide everything it wanted to know, and it would chitter excitedly in response. The only time it refused to give any indication that it was listening was when I asked about my mother. And it ignored all my pleas for food and rest, winking out and reappearing even further away than it was before.

When I finally remembered my grandmother’s stories and managed to take off my shirt and wear it inside out, I was lying on the muddy ground, shivering under the noon heat, my feet blistered and aching.

I passed out and woke up back home, where I was treated to my stepmother’s tongue-lashing. How dare I worry them? How dare I worry them to the point that the neighbors noticed that I was missing and had to report to the barangay, who in turn had to make a fuss and send out a search party?

When I pretended to go back to sleep, she struck me across the face.

My anger returned, and it made chittering sounds in my ear. I don’t think it ever really left.

“They’re coming for you,” I screamed, half-crazed, laughing, pointing at the lights that seemed to hover just outside my window. Closer than ever. “You can all die.”

Then I turned my shirt inside out and went to sleep. I dreamed of burning huts and charred flesh, and when I looked up at the mountains, the lights weren’t there anymore.

In the morning, I woke up to nothing but ash, and an empty softdrinks bottle.