by Isa Smith 5 months ago in Short Story
Report Story

"The moon is a very night time thing." 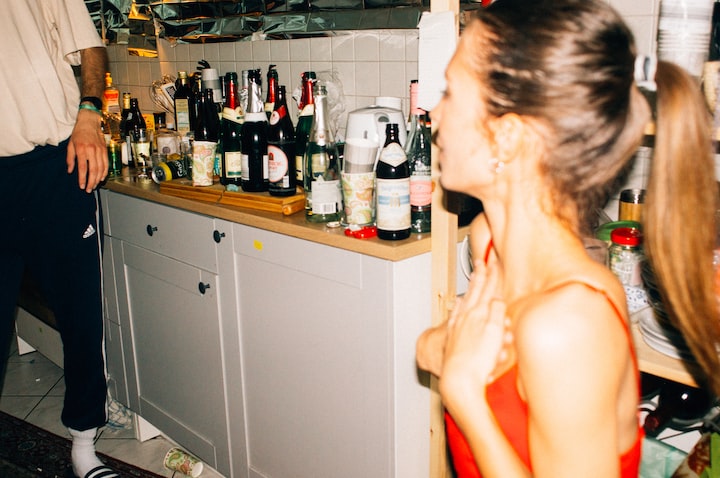 It was in a real roundabout way that I came to end up at Donkey Boy’s house at six in the morning. The night before had been wild as anything, one of those extremely dumb parties. Everyone drinking plastic-bottled cider like their life depended on it, girls puking in the garden, boys puking in the hallway, neighbours banging on the walls. Grass and oven chips and ciderpuke smushed across the kitchen floortiles.

Donkey Boy had commandeered the stereo. Everyone assumes he loves donkeys, but his passion is really nineties rap music, preferably from the West Coast, which is where he is ‘From’, in that tenuous way whereby he was born to ginger Scottish parents in the back arse of the California desert and ‘Lived’ there when he was an inambulant pink burrito-slug, before moving to Sleaford at a preverbal age.

Sleaford, to be clear, is a town of malignant mediocrity. The most exciting thing there is a soft play party venue called Crazee Bongos. The name Sleaford, as it happens, comes from the Old English words sliow and ford, which together mean ford over a muddy or slimy river. Said river bisects the high street and often contains shopping trolleys and Iceland bags. All of which is to say, this town is the type of place where people who buy mild cheddar cheese chose to settle.

Donkey Boy’s parents are both engineers who fix military aircraft, so my theory is they maybe could’ve lived anywhere with an airbase really, including Hawai’i, or Canada, or even Wales. But they chose Sleaford; which, I have come to understand, somewhat accounts for Donkey Boy’s relatively unusual judgment. More on this later.

You wouldn’t think it from his official title, but Donkey Boy is extremely good looking for Sleaford. It’s important you understand this. The angle and prominence of his jaw suggests an aptitude for chopping firewood and building things, and his dark red hair has a ruffled, silky texture, not coarse. Also, despite his height and the breadth of his shoulders, he walks with a graceful agility that implies he would both dance and fight well, though I’ve so far observed him doing neither. At parties, he connects his phone to the speakers and sits down somewhere, nodding and queuing songs.

I should mention, I have a boyfriend. His name is Joel. He is good looking but, in many ways, stunted. Maria says he has the kind of face you can’t quite trust. He was supposed to be at the party, and she kept asking where he was.

‘Don’t worry,’ I said. ‘Donkey Boy keeps looking at you.’ We’d been dancing to N.W.A, but by that point we were on the sofa. People had started smoking inside and the oven was snoozing dark fumes, so someone tall had put a bobbly condom over the smoke detector. Maria looked over at Donkey Boy, who was poking around gracefully in the freezer.

I tried to call him again. It rang through to Howdy, Joel here, don’t leave a message, I hate voicemails, hopefully see you soon but no worries if not. Buh-bye!

And then she started puking.

‘Fuck, Maria!’ I yelled, but it was on me already. All on my top, in my shorts, running down into the sofa cracks.

‘Help me get her outside.’ I said, and he nodded, and we hauled her out past the breakfast bar to the french doors. She wanted to walk then, so we let her go, and she went to all fours and crawled to the edge of the flowerbed where she carried on puking like a poisoned cat.

‘I’ll get some water.’ Donkey Boy said. He disappeared inside. I just stood there looking at the dirty pink sky, listening to the birds waking up, and trying to flick the puke off my hands. Maria’s dark hair was tied back, so there was nothing really for me to do.

Donkey Boy came back with a bowl of water.

‘She’s not a cat, Donk.’ I said. Maria was crouching in the grass, eyes closed, ready for more heaves.

‘There were no cups.’ he said. His deerlike eyes were fairly closed too. His name is Duncan, by the way. As in, Duncster. Dunky-boy.

He crouched and set the bowl of water down on the grass next to Maria.

‘Try to drink something.’ he said, and gave her a wobbly pat on the shoulder. She rolled onto her back in response.

A small bird flew off the fence and started hopscotching around on the patio. Then a blue plastic cup fell out of an upstairs window and bounced with a crack, scaring the bird. Maria lay inert, apparently asleep.

Duncan stood up, inspected himself, removed his t-shirt. He had a little hair and muscle peeking above his jeans, which I chose to ignore. Instead I followed his eyeline to the back wall of the house, from which a green hose reel protruded.

I didn’t really feel like going back into the party. I already knew Joel hadn’t turned up, because he would’ve come outside to say something like fancy seeing you here and pretend I never called.

Duncan approached the hose, seized it, pointed it at me. ‘Don’t you dare,’ I said.

‘Don’t I dare what?’ he said. He turned the tap on at the wall and squirted his t-shirt. He rinsed it for a while, smiling down towards the jet of water, splattering his jeans lightly.

I pulled my top off and held it out to him. He took it without looking up at me, and went to work washing it silently. I crossed my arms over my bra. A slice of moon was inching its way up above the rooftops beyond the garden fence, on which he hung both t-shirts once they were clean.

‘Did you know the moon could rise in the morning?’ I asked. He paused, then said, ‘Yeah.’

I looked at him. The brown of his eyes looked silky. ‘Really?’ ‘Well yeah,’ he said. ‘It’s obvious.’

‘How’s it obvious?’ I looked at the angles of his chin, which in that moment conveyed some kind of mathematical perfection, a tiny basin of a dimple at the nucleus. ‘The moon is a very night time thing.’

‘Mm,’ he said thoughtfully. ‘I know what you mean.’

He watched himself scrape his white sneaker along a crack in the patio. Greenish moss gathered at the toe. ‘I was thinking, should I walk you back? It’s basically on the way.’

I wasn’t sure on the way to where. But I said okay.

‘She can stay on Soph’s floor.’ he said, passing me the hoody. ‘Put this on. If you want.’

I bundled the hoody in front of my chest, hugged it, thanked him. The sky at the end of the garden was turning orange. Maria rolled to face us.

‘Show’im ya tits.’ Maria said, rolling to sprawl on her front. Duncan yelped a startled laugh. I put the hoody on. ‘Good lord,’ I said, peeping out at him from under the hood.

He just stared back at me, half-smiling.

When I think about it now, blinking into his eyes there in the garden before we put Maria upstairs and left the party, it felt like being rooted deep into the ground like two old trees who’d been there forever, but also like floating in air, like pollen. It felt like we were kind of immortal, actually. I could never tell him this now.

We walked along the long flat road leading out of Sleaford past the chippy and all the cul-de-sacs. We talked about people from school, what they were actually like in comparison to what people thought they were like. We passed the park, then Stokes Drive. A grey cat scuttled past us, body low to the ground, perturbed.

‘D’you wanna know something about Joel?’ I said. ‘If you want,’ Duncan said.

Duncan touched the skin behind his ear. ‘Yeah?’

‘Is a total ponce.’ I said, without having decided to say it. ‘Oh.’ Duncan said, carefully. We carried on walking in silence, faces turned up towards the levitating moon.

At something like five we arrived at Duncan's door. There were no cars in the drive. No one was home, he said, and he was going to have a bath. He felt dirty from all the puke.

I snooped around downstairs. They had a small conservatory leading off the kitchen, which was tidy, with pine cupboards and a ticking clock and faint whiffs like milk powder and harsh lemon spray as you moved around it. The conservatory was filled with hanging laundry and crispy looking pot plants. The house was quiet except for the rumble of tapwater upstairs. I wondered where Joel was and if that mattered to me anymore.

When I reached the bathroom Duncan was already in the tub. Steam was collecting at the ceiling and there was a small, textured window casting a beam of morning light onto one wall. Puffs of white suds floated on the surface of the water around his bare arms. His boxers were on the lino floor.

I stood in the doorway.

‘Get in.’ Duncan said, looking me in the eye.

The hoody came off and my shorts, and then my bra. I didn’t think about it. He was holding his arms out towards me, and as I slid my knickers down he nodded and made a space between his legs. I stepped into the water and tucked myself into the space and lay back on his chest. One arm went around me like a seatbelt. Soon, his other hand was creeping slowly back and forth between my chest and my waist.

We said nothing. Time passed like a swollen river and then he turned my chin and craned his neck over my shoulder and kissed me and it was right, you could tell. After that I felt his ribs soften and his frame lost its tension and his breathing was full. Under the water my body felt like it was sighing, unraveling. When he moved his hand between my legs I could hear my voice on the tiles like it was echoing from some other place and time.

It was a biggish bath, but he’s a biggish guy, so we couldn't move much. After some time he gripped me under my thighs, slid me up his body, then inched me back down, slowly, accurately, so I was sitting in his lap and my head was tipping back over his shoulder, temple against his cheekbone. The bath squeaked as we shifted. When he lowered me down, we made noises like all relief on earth had been distilled into sound.

We stayed like that for a while, pressing into each other like tectonic plates. Then it was too hot so we got out and went straight to his bedroom without towels, both nearly tripping over a shoebox in the corridor. In the bedroom we stood and looked at each other with stupid blissful grins on our faces and dark caves for eyes. He put me on the bed and covered me up with his body. It felt feral, to feel so safe. Just for that morning. But you don't forget a feeling like that.