let's go to the aquarium! 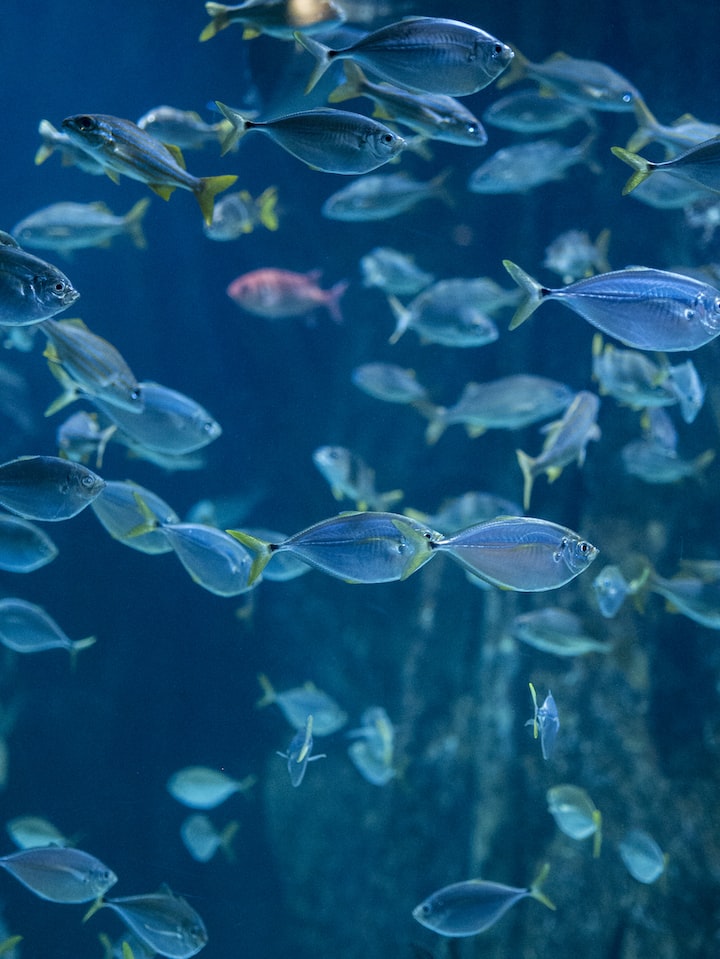 “But I don’t want to go” Sebastien pouted, a sour expression on his face. He absolutely hated having to go anywhere unless absolutely necessary. You could say he was a bit of a homebody.

“Relax, it’ll be fun! When’s the last time we got to go out as a family?” his father answered, looking back at his son. Sebastien still bore the same expression, which was mirrored by his younger sister, Felicia, and older brother, Thomas. Sebastien’s mother was beside his father, enjoying the view as they arrived.

“No buts, we’re already here” Sebastien’s mother announced, seeing the familiar building in front of them. “It’s been a long time since we’ve come here” she then commented to her husband, who nodded in agreement. It had been too long since they came to observe the animals; he wondered if the same ones were still alive from the last time he was here. It had been on Thomas’ birthday, many years ago, before their little family had expanded. They had expected and anticipated a much larger family, but they were happy with what they had nonetheless, despite the heart break it had brought.

“Race you inside!” Thomas challenged Sebastien, who frowned when Thomas had taken off so quickly, getting a more than unfair head start.

“No fair, you cheated!” Sebastien yelled after Thomas, who was simply laughing at his younger brother, not even looking back at the rest of his family. He remembered the last time he was here, despite it being so long ago. He wanted to see if his favorite was still here; he had to still be alive, right? From what he was to understand, they could live for almost one hundred years if they were lucky. Most didn’t survive that long, but maybe Gerry, the name he had assigned when he was younger, was one of the exceptions. Maybe, thought Thomas with a smile, Gerry was still here all these years later.

Thomas entered the Aquarium before the rest of his family, his heart racing from anticipation. He knew he had to wait for his parents before he could gain entrance, so he looked back, annoyed at how slow his family was. Some days, he was happy about the size of his family; it meant his mom and dad had more time for him, right? But the looks they got; the others at school who would make snide remarks, made him wish his family was just a bit bigger. He never mentioned it to his parents, he would never bring up such a sensitive topic; he could see just how much the comments bothered them too.

“I want to see Gerry!” Thomas announced as soon as his family got through the entrance. Behind the counter, Sylvia chuckled; it was very common to see such excitement before entering the Aquarium. It also was common for the little ones to come up with names for the exhibits. She did wonder who Gerry was, and whether he would still be here. For the little one’s sake, Sylvia hoped so.

“That’s for five, please” his father announced, and Sylvia nodded, taking all the appropriate information. She could see the excitement on the little one’s face as his dad was about to give the go ahead. “Sorry, he’s just been wanting to see Gerry” his father apologized.

“It’s alright, I just hope Gerry is still around for him to see” she spoke quietly, so the other two little ones wouldn’t hear. She tried not to broach the topic of death too much; everyone got so attached to those who made their home here, it was always sad for everyone to see them go.

“I know he just made the name up, but perhaps you could tell me where to find him? Would he be in the same spot as last time?” his father asked, and Sylvia shook her head.

“Unfortunately, I’m not sure. You know how they are- they like to move around. Most of the tend to not stay in their homes, but rather, go from spot to spot. I do hope you can find him!” she added the last part with a sad smile. It was rather unfortunate they liked to move around as much as they did. In fact, they were considering a bigger establishment to house them. Though they didn’t procreate quite like Sylvia and the rest of her family, or any family she knew for that matter did, the amount was steadily on the rise over the last few years; it was becoming a burden on all the staff to look after.

“Yeah, sometimes I wish they’d stay put. Thanks anyway” Sebastien’s father thanked the woman, before ushering his family to the beginning of the exhibit. It didn’t take them long to find Thomas, who was staring through the glass wall, his face full of awe.

“Is it Gerry?” Felicia asked, approaching her eldest brother quickly. Sebastien followed suit, and they all looked at Gerry, looks of shock and wonder on their face. It was little Felicia’s first time; it was presumed she’d have questions.

“What is it?” she asked, unable to pry her eyes away from the glass for even a moment to look at her parents. Her father chuckled to himself, remembering having this very conversation with both Sebastien and Thomas. Though Sebastien had never been, or seen them face to face, he knew enough to know what it was; he was quite the avid reader.

“Those are people. Humans.” Their father answered, swimming closer to them, approaching the glass to get out of the way of the big schools that were swimming behind them. “They live outside of what we know, they live by the water” he continued to explain. “Some of them, like Gerry here, can live to be almost one hundred; though most of them aren’t that lucky” he explained, relief washing over him. The look on his eldest son’s face as he stared at Gerry was all he could ever hope for.

“People” Felicia repeated, still, not taking her eyes off Gerry. She began to note there were others just like him. Some were small, some were quite large. They looked similar, but weren’t quite the same, not like her family. “What is it doing?” she asked. She was too young to be in school, so had known nothing of life outside her little community.

“He’s currently working. He’s exchanging his time and services to provide sustenance to his family, who are waiting somewhere for him. Sort of like a home, like we have” he explained to his daughter, who giggled.

“Where’s home for Gerry?” she asked. Oh, the young, always with so many questions.

“We’re not sure, but Gerry seems to know where home is” he replied, a little unsure. In truth, he didn’t know nearly as much about humans as he would have liked. They didn’t interact outside of viewing them at the Aquarium, and of course when he was in school, he paid little attention. He also knew they presented a great danger to them if they had ever escaped their enclosure; it was why they were all sectioned off and contained to the Aquarium. Though it was meant for the observation and fun of humans, it was also meant to protect them. Felicia was much too young to know about all of that, so he simply left it at that.

“People are weird” Sebastien commented with a laugh. “You know, they spend most of their time working and sleeping? That’s it; nothing else. Can you imagine?” he asked, his question obviously rhetorical.

“That sounds boring” Felicia answered anyway, watching Gerry type away at his computer, doing whatever work it was he needed to get himself through the day.

“Just be glad they don’t escape through the glass and eat you” Sebastien teased his little sister, whose face immediately fell.

“Sebastien!” his father snapped, giving his son a look of you better not continue that train of thought, otherwise you’ll be walking with the humans. His son seemed to understand the look, so he continued to observe, this time quietly.

“Will they do that? Will they eat us?” Felicia asked innocently. Her father wasn’t sure how to respond to that question. Oh, the young; they had so many questions. What he wouldn’t give to be naïve like her again; to not know the terror outside of their community. He wanted to keep her sheltered and innocent for as long as he could. So, he did what any father who wanted to protect his daughter would do.

“They’re not going to come through the glass, you don’t have to worry about that. Sebastien just likes to read too many books.” It wasn’t a lie; they had never experienced an issue with the humans coming through the glass before, though some days, he was convinced that’s why they all went to these different spots around the enclosure to work.

“But will they eat me?” she asked, and now he was at a loss.

“Look at Gerry, he’s so old, do you really think that old thing could eat you?” Thomas butted in, saving his father from what could have been a very long, and awkward conversation.

“No” Felicia giggled, cuddling up to her brother.

“Besides, I can protect you” Thomas added proudly, which only made his sister’s smile grow larger. He sighed with relief, knowing he didn’t have to burst her bubble just yet. In the meantime, they would spend their afternoon at the Aquarium, observing the silliness that were humans. For now, she could stay in her bubble, far away from the terror that was the outside world.