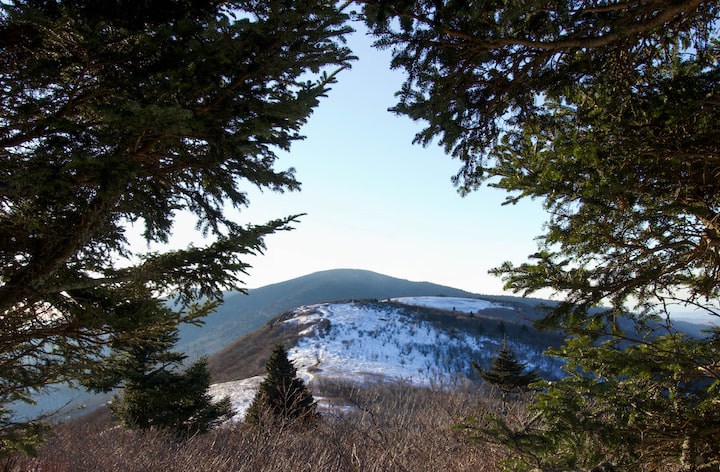 Photo by Leslie Cross on Unsplash

We drove up the snowy, winding road towards the cozy A-frame cabin. It sat leaning over the edge of the mountain, the side of which we were driving along. It's comfortable, wintry, colorful appearance evoked a sort of Dickensian-Appalachia type of feeling. The gravel of the narrow road crunched under the weight of the Landcruiser’s tires. One the ground, squirrels dug around in the snow, searching for something to eat.

“This is the spot,” said James from the driver’s seat. His voice rode with the echo of the music—Oh! Sweet Nothing, by Velvet Underground.

I was sitting in the very back, my arm hung out the horizontally sliding window.

The cabin was beautiful. It’s A-frame leaned outward over the edge of the hillside as if to dive into it confidently. In the spacious side-yard sat a circular, gravel-based firepit surrounded by lounge chairs. In the back of the place, nestled up against the edge of the mountainside, lay a hot tub, which was open, steamy and bubbling—one of our other friends had already made it to the place.

“Let’s get some burgers going,” said James, making his way immediately from the Landcruiser over to the firepit, where he placed a grilling grate atop it and began getting a flame going.

I was excited, and so happy to be here with a few of my closest friends, but I was also so nervous. My anxious energy easily overwhelmed any other competing emotion. My hands shook uncontrollably as I sat by the firepit, and not from the cold. I hadn’t seen her in so long. I was only back in town for a week, back from teaching English in Russia. She was only in for a week, as well—on a New Year’s vacation from her work on the Rosebud Indian Reservation, in South Dakota. My friends—James, most specifically—had decided that we should spend a weekend at Red River Gorge—only a couple of hours drive from our home in Cincinnati. He was right—it would be a great time—but I was so nervous to see her. What would she think about me? Did she even care about me anymore?

“You excited to see Mary?” said James. He was flipping a charred, sizzling burger with one hand and placing a buttered bun onto the grate to toast with the other. The fire was already burning bright; I had zoned out.

“You don’t know what to think about it, do you?”

“I know what to think about it, I just can’t help but be nervous.”

“Awh, hell… Don’t worry about it; she still loves your dumb ass—I’m sure of that.”

“That don’t mean a damn thing. People don’t just up and stop loving each other. You know that’s true—obviously—you been sitting there alone in Moscow thinking about meeting back up with her; I know it.”

We took the plate of finished burgers inside, sitting at the table with Mike, our other friend who had walked in from the hot tub with a towel wrapped around his waist. I ate two of them in probably less than ten minutes, with nothing topping them other than cheese and mustard.

“So what the hell are we going to do this weekend?” said Mike, taking a healthy bite from his constructed double quarter-pounder. He began chewing with strain, unable to keep his mouth shut.

“I want to hit this hike called Cloud Splitter,” said James, “It’s well reviewed. You get to climb to the top of this huge cliff and stare out over the edge of the world. It looks gorgeous.”

I was only barely listening to what they were saying—my mind still elsewhere.

“What time is Mary supposed to be getting here?” I interrupted finally.

“She said sometime around eight,” said James, “Which,” he lifted his watch and glanced at it, “Was about a half hour ago. Wonder where she’s at?”

“There’s no service up here,” I said. “If she can’t find the place, she might be out of luck. Should we go down to the gas station and try to get a signal?”

“We will if she doesn’t show up in the next twenty minutes or so.”

As if on cue, Mary’s Kia Rio pulled into the parking lot. Its black color contrasted beautifully with the driving snow, which pelted it as the windshield wipers—unnecessarily set to their highest setting—batted them away as if they were allergic. The spinning wheels crunched in the gravel parking lot before briefly skidding in the snow to a sliding stop.

For the next couple of minutes, there was nothing.

Then the passenger’s side door opened, and out stepped some dude I didn’t know. He was tall and confident looking, wearing a poofy Columbia jackets and a pair of fancy brown boots. He walked over to the driver’s side door and opened it for Mary, who got out. She looked beautiful, just as she had before I left. She was wearing a heavy, salt and pepper colored winter coat and black gloves. Her bright blonde hair fell down past her shoulders. She shivered in the cold, looking at the strange new guy and laughing. Looking up at me—I was now standing at the glass of the large front-facing windows—she smiled in acknowledgement, though didn’t wave. She was never much of a waver.

I yanked open the door and galloped down the snowy stairs, for a moment slipping and nearly falling on my ass. I walked with a purpose to the edge of the driveway, making uncertain eye-contact with this new man. I hugged Mary, though only a one-armed greeting hug.

“Not really—only for a minute. We just had to take it slow getting up here; the roads are getting bad.”

“This is my friend Daniel,” she said, gesturing to the new guy, “He works with me on the rez.”

Daniel reached out his hand to shake. I begrudgingly obliged, squeezing his hand as firmly as I was capable.”

“There are burgers inside,” I said to them both.

Daniel trudged through the snow and walked up the stairs through the large glass double doors. A huge window covered most of the front of the cabin—I could see Daniel introducing himself to my friends. Mike was laughing animatedly.

“I wonder if he’ll steal my friends next?” I thought to myself. I then looked back to Mary:

“Who, Daniel? Hell no! He just didn’t have anywhere to go for the holiday, and I didn’t want to leave him on the rez all lonesome, so I invited him to come along.”

The anxiety which had previously been invading my psyche subsided. I looked again at the world in a positive way, free from my previous stress and mental anguish. Mary looked at me, confused.

“You thought I was dating him!” She said finally, “You were jealous!”

I smiled, not knowing what to say.

She hugged me. She smelled perfect, like she always did. We walked inside, arm in arm.

I still had four months left in Russia after the New Year’s break. I didn’t want to go back.

The snow continued for the rest of the night. It was beautiful.

Robert Pettus is an English as a Second Language teacher at the University of Cincinnati. He also taught for four years in rural Thailand and Moscow, Russia. He has had numerous short stories published, in both popular and academic journals

More stories from Robert Pettus and writers in Fiction and other communities.