by Christine Reed 11 months ago in Adventure
Report Story

The future of the nomadic lifestyle. 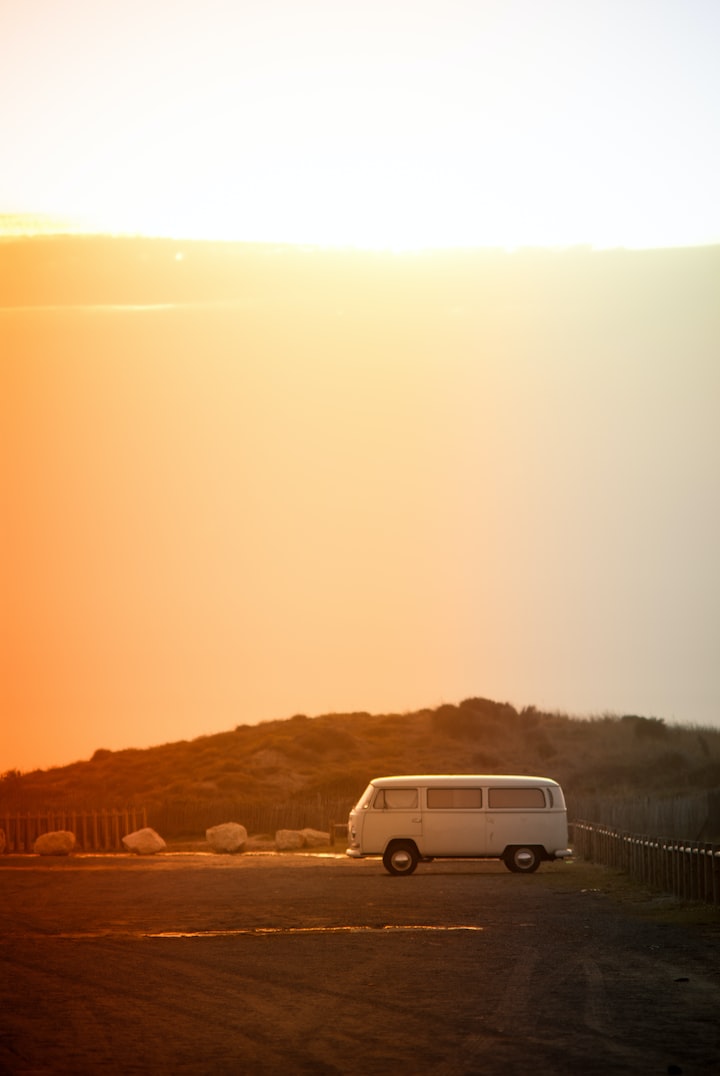 Photo by Olaf Hüttemann on Unsplash

I’ve been searching for weeks now, but haven’t found any sign of a waypoint. I should have known it wasn’t true. If a way across had been found, people should be lining up to get back to the mainland. Those late believers that thought they’d have more time have been stuck for years—isolated in California. Maybe they’ve all perished.

In a rare moment of stillness, I stand at the edge of the great chasm. I am reminded of the Old Grand Canyon, back before the shifting began. Between here and California is nothing but empty space and the depths of the earth revealed. Colors in the soil you might never have imagined—deep burgundy and purple striations. I know it’s dangerous so close to the precipice. The ground on which I stand is no more permanent than the breath in my lungs.

I drop a rock into the gaping wound and listen as it clunks and rattles its way down, each sound echoing and bumping into the next until a musical clatter surrounds me.

“Hello!” I call down after the rock, adding my voice to the symphony. It’s been so long since I’ve spoken, I scarcely recognize the rasp that issues forth.

I turn away, there’s nothing to see here. I’ve parked my rig about 5 miles back—I can’t afford to lose it to the instability of the cliffs. There are too many unknowns this close to the divide. So, I walk. I save my energy in case I need to run.

I finger the locket around my neck, feeling the etchings in the silver under my thumb—I shouldn’t need it this far out. Nobody comes so close to the divide anymore. Too many lives have been lost, too many scouts have gone searching for a way and never returned. I want to speak. To be heard. But by who? Perhaps those scouts are still out here.

I sink into the driver’s seat and start the van. The low battery signal flashes, I’ll need to get more sun tomorrow. But hopefully I can make one more stop today before it dies. The road north is cracked and broken causing me to shake and rattle, though the ground is mercifully still. It’s 6pm so I turn the radio on, though I’d rather not use the power.

You’re listening to the 6 o’clock report from the National Department of Transportation. A fissure has been sighted on Highway 84, west of Boise. NDOT officials have been dispatched to assess the area. An official notice to avoid the area is in effect until a full report is made available. An alternate route has not yet been determined.

About ten miles north, I pull back off the main road. Through the grimy windshield, I squint to make out the overgrown service road from the ancient, crumpled atlas. As the human population dwindles, the earth reclaims places we once thought of as ours.

Only a mile from the van, I pass through ruins. I hadn’t meant to park so close to them. Tree skeletons stand black between piles of rubble. I tread lightly, not wanting to leave any trace of my presence. An authoritative stone wall stands in the middle of town, an empty arch where there had once been a window. A shard of bright turquoise glass clings to the bottom corner, jutting up like a dagger. It’s been years since this place burned, but the char is black as ever. My eyes well up and a stinging prickle in the back of my throat makes me choke and gasp. I hold back my coughing until I’ve reached the other side of the ruins.

It’s impossible to know how much farther to the edge. I’ve grown accustomed to these long walks. When the earth is always moving, so must I. I think about the others, those that have disappeared while searching for the crossing. What if they really did find it? The gateway to the land of milk and honey.

If I find a passage, will I go back to tell the others? Likely not. It wouldn’t be worth the risk. The path could disappear while I was on the wrong side. Or maybe there’s nothing over there anyway. Only the same destruction we have here. The same divide, the same fear, the same loneliness.

Standing once more at the top of the bluffs, I squint back south to make sure I haven’t missed anything before turning northward. My eyes are irritated and puffy from the ruins—they must be playing a trick on me. The distance between the cliffs has been inconsistent, and islands stand isolated between here and the other side. But miles north… is that a bridge? I scan the western rim which seems to be reaching eastward offering a hand, an olive branch. It could just be an island. It’s impossible to know from this distance. I’ve got to get closer.

In a rush to get back to the rig, I run. My mind races with images of the other side. They’ve got farmland and plentiful food. And the ocean. I’d give anything to stand in the ocean with the waves lapping over my feet. Remembering time when the rhythms of the earth weren’t so violent. I no longer care about the sound of my footsteps or disturbing the ash blanket that lies over the ruins. My heart pounds in my chest and sweat beads on my forehead as I run down the long-forgotten streets. There could be Hermits beneath the rubble, but they should be sleeping. Ruins are never safe, but to go around would take too long, I haven’t got time.

Something falls, crashes, cracks, breaks. The earth is moving again. Now I’m sprinting, if I move my feet quickly enough, spend more time in the air than on the ground, that seasick feeling won’t be able to settle in my gut. I’d rather be on foot when movement begins than in my rig, where the vibrations are magnified by the size of its metal body. Little is left standing, but piles of debris begin to slide and shift. Like lumps sifted from flour, human forms rise from the detritus.

There is nowhere to hide, I’m in the middle of the ruins. The Hermits behind me will never catch up. They haven’t run in ages. But I’m surrounded. If I’d made it through the ruins before the shifting, they would have never known I was here. They only emerge from the rubble by night to scavenge and forage. There’s little left to be had in parts like these.

The craggy voice carries through the commotion. I put my head down and keep running. There’s nothing for it but to keep running. My legs burn as I churn the quaking earth.

Dozens of them surround me, closing in from every direction. These ruins must have been well equipped, for this many survivors. There’s nowhere left to run, I turn back. The pale, stooped Hermits form an ever-tightening circle around me.

I yank the locket from my neck, breaking the delicate chain. The silver heart is small in my hand.

This is the only way. They’re never going to let me leave with my rig. I swore I’d never live as a Hermit again. I can’t go back under the rubble. I won’t.

More stories from Christine Reed and writers in Fiction and other communities.