Drama off the Coast

by K.C. 3 months ago in family 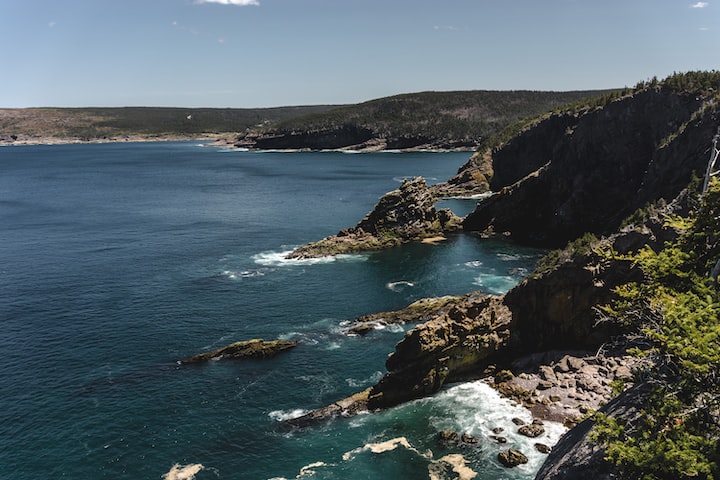 Photo by Leonard Laub on Unsplash

The sky was clear with only a couple of clouds floating by with the slight breeze as the lilacs swayed next to the path that headed down to the wharf where Harold had his old putt-putt tied up. The commercial cod fishery had begun and the bay was beginning to fill with eager fisher-people ready to put their lines in the water. This is the time of year at the beginning of the summer when all the small communities along the coasts of Newfoundland look forward too, the few weekends they can get out and catch their cod for the winter. Little Mikey and his twin sister Mary came running up behind their uncle as he reached the little boat bobbing in the water. “Do you have everything that you need kids?” Harold asked as he helped them into the putt-putt. “Yes uncle,” Mary replied. “We have a rods, bait, lunch and most importantly we have our life jackets.” The little girl continued as Mikey clambered his way up to his favorite spot at the bow of the put. Once they were settled Harold started up the small boat and they made their way out to the fishing grounds with the putt-putt echoing in the background.

Once they made to their destination Harold was discouraged cause there were so many boats out on the water so he decided to go to a different spot not to far away. His secret spot where there were usually a lot of fish and less people. As he rounded the point there was no one to be seen, not a single boat and this brought a smile to his face and he shut the putt-putt down. “Ok kids, get your lines ready and get them in the water, this is our spot today," he said and the kids screamed with joy. Mikey had his line in the water first and it wasn’t long before they were catching all sizes of cod fish.

They just about had their quota for the day and Harold looked at the children, “Ok kids, one more try and we will be heading back.” Mary put her line in the water and it wasn’t long till she had a bite, but it seemed larger than the ones she caught earlier and it was pulling out all her line. “Uncle, help me,” she called out and Harold reached ahead and grabbed he pole. “What have you got there Mary? It weighs a,” he didn’t have the words out of his mouth when a huge shark jumped out of the water almost landing on the boat. Harold fell back and the line tangled around his foot as the shark began to dive again.

Mikey was only ten years but his uncle trained him well and when he noticed the line around his uncles foot he grabbed it and wrapped it around the bow so his uncle wouldn’t be pulled over and as he put the final loop around the line became tight and the small putt-putt began moving. The shark surfaced once more and Mary seen the dorsal fin as it began circling the boat causing the boat to spin. Harold was looking everywhere trying to find his knife to cut the line so he could get up but he could not see it anywhere. That’s when the shark had enough and it began ramming the small boat and bit into the railing, almost capsizing the boat. Mikey grabbed one of the oars and started to hit the shark, trying to make it let go, but when it did it grabbed the oar and almost pulled Mikey in if it wasn’t for Mary grabbing hold to his life-jacket and pulling him back.

Everything went quiet then. The water went calm and the wind died out and the ocean was like a mirror, not a ripple. “Where did it go? I’m scared uncle!” Mary said. “I don’t know little ones but come sit in the middle of the boat.” That’s when Harold seen his knife and he cut himself free and just as he freed himself the boat shook violently as the shark rammed into them again. “The old boat isn’t going to take to much more of this, we got to get out of here,” he said as he tried to start the motor. The little motor roared to life with a putt-putt-putt and Harold pulled up the anchor when he seen the teeth of the shark coming towards him from the depth and he jumped back as the shark came out of the water and landing with a big splash. Harold put the little boat at full speed but the shark still had the hook in it’s mouth and it was holding them back and the little engine was working as hard as it could and Harold had to turn it off before it blew up.

The day started growing late and Harold knew that there wasn’t going to be much daylight left so he reached for his flare gun and fired a shot into the sky hoping that there were still people fishing out on the bay. That’s when the shark became more aggressive, repeatedly ramming into the boat and when Harold tried to cut the line from the bow, the shark hit and he lost his knife over the edge and fell back almost landing on Mary. Not knowing what else to do he grabbed his niece and nephew in his arms and huddled in the middle of the boat. With no anchor holding them in place the shark started to drag them out to sea and that's when Mary seen a light coming around the point. It was another boat, a bigger one but they were so small, how could they see us. Harold grabbed his flare gun once again and shot another flare into the sky. This time they seen the the flash in the sky and came rushing towards them but the shark was having nothing of it and swam faster before turning on the small boat again. It was too late, as the shark lunged at small boat a harpoon hit it in the side ending the ordeal for Harold and the kids.

The Coast Guard pulled the small boat back to the wharf where all the family members had gathered cause they were suppose to be back long ago and were relieved when the small boat docked at the wharf. The kids ran up embraced their parents as Harold hugged his wife when the coast guard boat came to the wharf and hanging from the mast was one of the biggest sharks that they had ever seen and they were lucky they survived.

Receive stories by K.C. in your feed
K.C.
Read next: Framed Part One