by CarmenJimersonCross 4 months ago in Fantasy
Report Story

...but there weren't always dragons in the Valley. 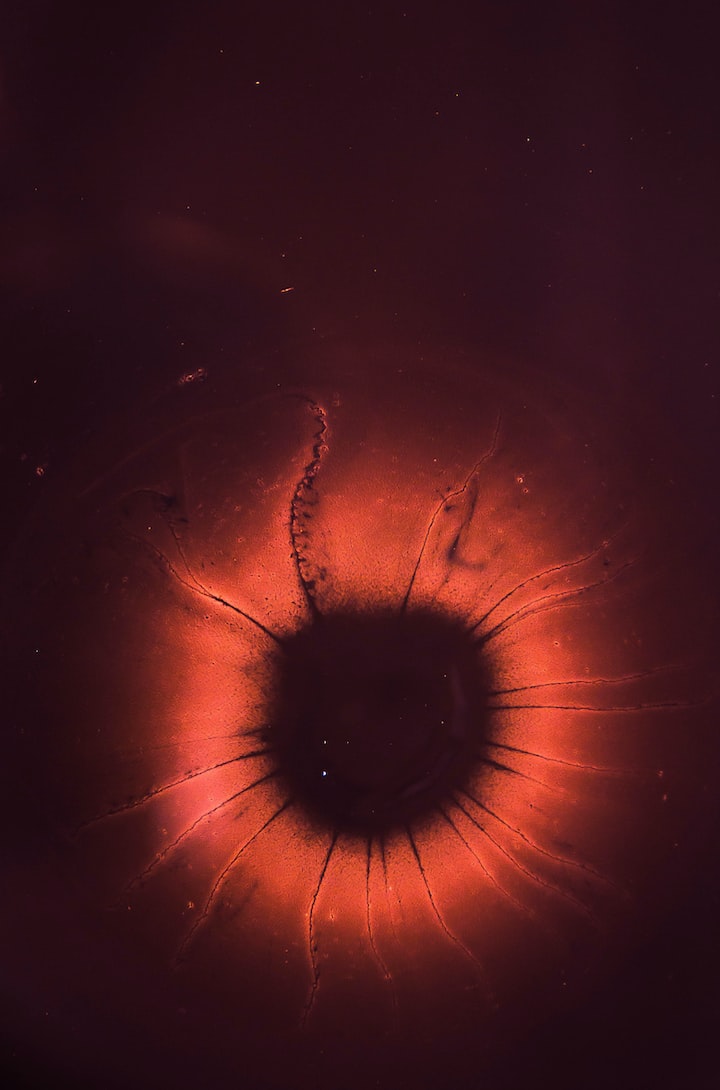 LIKE BIG BROTHER, the dragon's eye was ever watching from its undisclosed settling someplace in the Vulcan Mine along RED MOUNTAIN. It could see from beneath the stratified rock of kidney red hematite which literally passed as the hide from a reptilian carcass found many generations ago by children playing in the new mining settlement. The dragon's eye could see well beyond the clays beneath the Wenonah Schools, a company-owned school series for local children of miners living within company-owned mining towns established by the Tennessee Coal and Iron Company (TCI) of 1917... but there weren't always dragons in the Valley. The Wenonah School, nearly complete as early as 1943, was destroyed by a fire caused by a lightning bolt in 1946. The Tennessee Coal & Iron (TCI) Company donated a parcel of land consisting of approximately 16 acres (6.5 ha) to be used for new elementary and high schools. Construction began but was not completed within its schedule due to vibrant antagonism from surrounding populations and accomplished work was repeatedly demolished. Because it had such drawn-out and lengthy channels to bypass before classes could be held within a building, alternate plans began in the fall of 1946. Students were sent to attend classes within the distant town of Galilee, Bryant Chapel, and Mt. Olive Baptist Church. They were grudgingly accommodated among populations of Riley and Powderly Schools for which materials were provided by TCI for heat and lights and construction projects. A new Wenonah Elementary School and Wenonah High School were built and completed on land donated by TCI by 1947. With persistence and determination, the education program took hold and students could attend their designated campus. In spite of the good it was doing in regard to educating the children of its workers, The Tennessee Coal, Iron and Railroad Company (TCI) was and had been one of the largest users of prison laborers, mostly Blacks convicted of petty crimes... a petty crime being a classification of crime that falls mostly in the category of violations and infractions. They were put to work for whatever duration in the coke furnaces for smelting or the mines for digging red ore, coal, and limestone. This, as penalization for their convictions of petty crime.. traffic offenses, disorderly conduct, and shoplifting. Petty means of little consequence or importance; as a method for paying fines... "for their sins." Petty as it was, it was their evil met with evil done them in trade. Drawn from therein was the source for mining labor in Alabama at the close of the Reconstruction Era after the America's CIVIL WAR. The number of convicts employed increased after 1907... after the end of slavery, as did the brutality of the conditions in which these mining workers labored. In 1908, almost 60 "prison" workers died from workplace-related accidents. It was as though it were simply created as a prison and not a corporate entity at all. Prisons provoke unrecounted evil built upon evil.

It was said that because of the eerie beginnings surrounding the lightning fire and the timely institution of the TCI's "whole-hearted" charity... originating just after the close of the civil war era, of provisional education for its "employees" the mine erupted. It was agreed that the distention surrounding something so simple as educating children was just "another layer of cruelty" directed at little ones. It could have been something good but was made to be of monstrous amplitude. It erupted as viciously as any eruption of fire and brimstone, in whole of its fossilized deposits. There hadn't always been dragons in the valley. Anger and animosity can provoke many miseries. Just as it had in the early years of its discovery by meandering students eager to get in a day's play in the area where they were sent, but did not dwell. The low rumbling from within the lengths of Red Mountain Mines bridged horror and terror. It promised misery from intact and mobilized fossil creatures not resembling the crustacean... precursors of clams... displayed behind glass in the showroom beneath a bronzed image of Vulcan... the Roman God of fire... perched atop a pier. The same Vulcan that was said to have been there... to have stopped the first of blood-red dragons found within the mine beneath the red clays amongst the red ore. He had stopped that particular instance of assault after it had slain miners working deep within the pits. Stopped it, but was stopped himself as he did so. He was found fossilized... his flesh and bone coated in hematite ore similar to that of the mountain's depths. Children playing near the site had heard the rumble which could simply have been concluded to be a cave-in. It could have been another blasting. It could have been "nothing." But the rumble followed by a deafening skreel then beating of wings seen high above the water towers and treetops said much more than a general... a typical conclusion. It was something. Down there, visible from the Vulcan's perch was a ridge under the canopy of trees along the length of the Shades Valley. Rising above the branches of the lowest of trees on the other side of the valley was a red dragon. It could only have come out from within one of the open mine caverns. Come out because unlike the scaley orbs of red ore that resembled scales, his scales had not been peeled, punctured, or gored by dynamite and drill bits. The question was, "Why was it here?" Everyone wondered. Not many had seen it but everyone had heard it in the distance. Nearly everyone had seen the ore pulled from the mines, more unusual than that from anyplace else. Many knew of the "fossil" reputation their mines touted, but no one suspected anything could survive the depth and cold of the underground. What they did know was that there was an additional line of caverns opened by miners in 1876 that connected to RED MOUNTAIN mines from the north under coalfields at a town named WARRIOR. Named so for unknown reasons other than that the name fit the space. Caverns beneath the town extended over 1200 miles in varied directions... including into and under Paul Hill.

Many nights of having lived in the towns surrounding the mines... working at the furnaces smelting ore, breaking limestone and sandstone, processing coal; the townspeople commented on murmuring beneath their floors... far beneath the floors of any home with or without basements or cellars. Although the digging was in controlled areas on the outskirts of town, no one had record nor map of digs or cavern exploration from earlier generations that existed before TCI. They knew only that there were channels below the earth that ran in many unpredictable directions. Under earth at depths that could cause echo of sound from above ground. Echoes resounded through shale and boreholes left by crustaceans long fossilized by time. Children had ventured off and into caves on a typical child's game of "haunting" and "spooking" one another in tease based upon the sounds from below ground. They had gone in, and in a short distanced trek, run out after one another screaming in fear of what might lay ahead deep inside the twist and turns of underground trails. One such exploration on an early morning "hookie" venture brought what was now on display at a local museum... a mummified dinosaur with wings. Somewhat of a pterodactyl-looking creature, mentioned as a duplicate of that found at the Saints & Sinners Sandstone Quarry; was found in a wetted cave somewhere behind the waterfalled entry underneath the town of Wenonah. The mines and caverns connected by only a few breakthrough digs were randomly explored by adventurists; never by miners working for their day's wages. It was that venture which would prove the skreel and murmurs underground not to be imaginary trysts in the lives of those dwelling in Paul Hill and further. It was the breakthrough of walls joining mine and the unexplored cave which would give definition to the mascot chosen by the high school class of years ago. The Dragons were no joke. It was a truth to be found out. It was the arrival and the finding of that arrival in the space around Paul Hill that was about to bring the evil back home. The days of the ore furnaces and the cruelty which made them fruitful by way of the churned bowels of the earth beneath them was here... reborn and awake where it had never been. The Shade Valley parallel to Paul Hill was about to see its own. There had never been dragons in the valley near Paul Hill in Bessemer, Alabama, until now.

The cave wall somewhere deep inside the mountain's natural depths was stricken too thin on the mining side and gave way to a slight nudge from a something hidden from sight for too long. The scaley appearance of red ore was the torn away hide from what was once living beneath the surface. Like attitude torn out from the shallow core of anger, so was the something... the beast that broke through sandstone alive after so much time of pseudo hibernation. Its mind-piercing skreel was evidence that something evil was loose upon the land. I was there, just across the valley in the overhang of trees that could barely disguise the beating of wings glimpsed from the distance of Paul Hill. Paul Hill was just across the valley and up an 850 -foot run of red clay and sandstone ridge from the Shade and Little Shade Valleys. The ridge and valleys below it made playspace for youth driving vehicles not made to climb steep heights. and daring foot racers more enthused by adrenalin from not falling over a steep cliff than following the challenge of a straight-out run. The dragon was one of what was found intentionally in several late geological digs. What should have been fossilized or left in a tar pit along with other prehistoric monsters. Things like that were found elsewhere, but not near Paul Hill.

Read, like, and subscribe! Maybe toss a dollar tip into my "hat." Thanks! Carmen (still telling stories!)

More stories from CarmenJimersonCross and writers in Fiction and other communities.