Down, Down to Gas Town

Panic at the pump 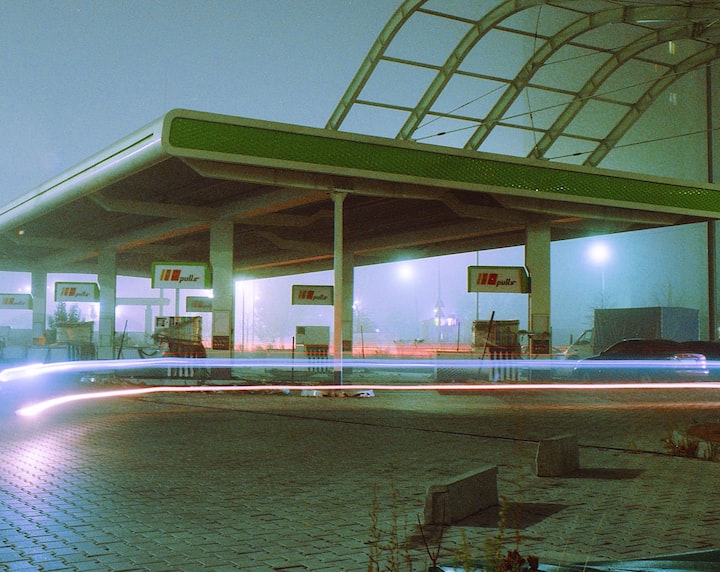 Photo by Yevhenii Kershkov on Unsplash

They passed another gas station on Century Avenue with a sign that said “No Gas.” Could you call a gas station “a gas station” if it didn’t have any gas? Tyler didn’t know, nor did he know what else you would call it. A convenience store? The one they just passed had four pumps and a building barely big enough to stock more than candy bars and cigarettes. Hardly convenient.

“Jesus, Tyler, just stop somewhere,” Cara said, rolling her head left and right on her headrest. She said it in a loud whisper, which she knew he hated.

His knuckles were white on the steering wheel. The gas light came on a few miles earlier, on their way back from Cara’s parents’ house, so he detoured to fill up. He didn’t know how much longer he could drive, as his hulking SUV wasn’t known for its fuel efficiency. Sweat clung to his forehead like dew; he couldn’t afford to turn on the A/C.

A cardboard and black marker sign on the station’s price board informed them of barren tanks, and Cara made a show of pointing it out as they passed. “Oh look, there goes another gas station.”

“I can see that, Cara. I can see all of them. Can you see the signs that say they’re out of gas? You know, the thing we need to stop for?” Tyler used the tone that he knew she hated. The one where he filtered his rage and derision into strained, terse phrases.

“Remember how you laughed at me for wanting a Corolla? Remember laughing and calling them… What was it you called them?”

He ignored her, focused on the scant traffic, and wondered at the intentions of each vehicle. Were they his competition to the pump, or just trying to slow him down? He honked at one car, an old Mazda, and passed it in the bike lane.

“You know, if you didn’t drive like a jackass all the time, you’d get more mileage.”

Hand to forehead, he wiped his sweat so aggressively the drops rained on Cara, who didn’t comment on it. She was also sweating heavily, so maybe she just didn’t notice. He’d roll the window down, but the air in this part of the city grated like saw dust in his lungs.

“Oh look, another one! But wait—another sign? Can you slow down so I can read it?”

Tyler hated the look of all the gas stations, which dotted along Century Avenue and its tributaries, one after the other. Hundreds, it seemed. All looking older, rattier, drabber, than every other building in the area. As they headed further north, though, the differences in quality between the types of buildings evened out. Bars guarded the windows, broken glass on sidewalks reflected the setting sun.

He didn’t like to go north of Washington unless he had to. He grew more nervous as he drove, both because of the gas situation, and because he dreaded the prospect of stopping in the bad part of town. Tyler had seen the news, had heard the stories from his friends at the shop. He thought of the north side as nothing but trouble. His SUV was new, and he didn’t much feel like getting robbed, but the handle that jutted into his side gave him some comfort. He could defend himself, but he would rather avoid a dangerous situation altogether.

“Oh, remember what you called Tesla drivers? After I said we should trade this money-hole in for an electric car? What was it you called them? It was so funny I’m surprised I can’t remember it.”

“It’s a fluke, Cara. All this is a damn fluke. They’ll fix the damn pipes, and it’ll be fine. Just like the other times.”

“Yeah, it’ll be fine. Until it isn’t. Notice how you said ‘other times’? Because it’s happened more than once? This one would be, what, the third time this year where everything played out exactly the same way? I predicted this would happen again. Do you remember me predicting this happening again, Tyler?”

Of course he remembered, and she knew he remembered. She mentioned it at least once a week since the pipelines got hacked again and people started panic-buying. He would’ve done the same thing, but someone stole his gas can from his shed and there weren’t any more in the stores. In addition, he failed to take the initiative, which his wife never let him forget. He didn’t buy emergency gas in time, and now he couldn’t. He chose an SUV over a more fuel-efficient car, and now he couldn’t even pay someone to take this gas-guzzling monster off his hands. Tyler loved driving that big SUV anyway, and didn’t relish trading his dignity in for a Prius.

He took a right on a numbered street and almost smacked himself. The street ran downhill and had no gas stations he could see from the top. He would need to hook a left at the bottom, another left at the next street, then back up the hill, which would eat at his gas reserves even more. At the intersection at the bottom of the hill, he turned left, and his heart fluttered in this chest.

There was a gas station, its price sign still beaming numbers in green light. The rest they'd passed had all been blank. He pulled in, killed the engine, and scanned the place. No one was around.

“Lock the door when I get out,” he said.

He had stress rashes on his arms, which he fought the urge to scratch in the short walk to the door. It jingled open, and he visually inspected the parking lot and street once more before entering. The lack of pedestrian and automotive traffic during a gas shortage perplexed him. But then, maybe that’s how it always was north of Washington, and maybe that’s why they still had gas here. An oasis of fuel no one discovered yet—but they would. He really wished he had that extra gas can now.

Inside the bullet glass surrounding the counter, the clerk sat watching a screen Tyler couldn’t see, but it sounded like a circus fighting with a musical for domination. He grabbed water and some cheese curds, then went to the counter.

“$200 on pump—” he looked over for the pump number and his dreams of a full gas tank crumbled. You didn’t need tarot cards to predict what was about to happen.

In the interval between first entering the gas station and going to the counter, four utility vans blocked off the parking lot. Men in normal clothes, and some carrying rifles, climbed out, pulled open the vans’ doors, and removed large red plastic drums that they placed at the pumps. Cara was nowhere to be seen, likely in the back seat, hiding. One man tried peering through the SUV’s tinted window and gave up with a shrug. Cara must’ve hidden below all the crap that plagued the back seat, something she often complained about.

“Shit. You should probably get in here,” the clerk said, and unlocked the door to the counter. Tyler went in to discover it was a far more fortified structure than he’d expected. He’d always believed the windows were plastic.

The door locked behind him as three of the men entered the gas station with rifles and stood in a half-circle in front of the counter. Their scalps were sun-reddened and balding.

The center of the trio spoke. “Turn the pumps on, boy.”

The clerk said nothing, his face remained stoic and flat. His calm demeanor, genuine or an act, contrasted with Tyler’s, whose hand lingered at his side near the handle of his gun. Every muscle in his body trembled.

“Come on, asshole. Turn the pumps on,” said the man again, lifting his rifle to the attendant. The two others did the same.

“No,” said the attendant.

Time seemed to slow down. His heart pounded an ominous beat, and his guts rumbled from transforming its contents to soup. He glanced outside. He could see his wife’s corpse-white face through the windshield, poking up from the back. Since he could see her, anyone else looking in that direction would too. He waved at her to get back down.

The men turned to look outside as Cara’s face vanished once more.

“Who the hell are you waving at?” a man asked. Three rifles pivoted to Tyler’s torso.

Another man spoke to him, his voice like gravel falling from a dump truck. “Get your friend in there to turn the pumps on, and we won’t test how strong the glass is.”

Tyler felt cold then, a chill in his arms and legs. The men were breathing deep and loud through their noses. His trembling hand moved neither toward, nor away from, the hidden firearm on his waist—rendered immobile by the fear-stunted machinery of Tyler’s brain.

The men released a barrage of bullets into the ceiling, and afterward threw racial slurs with similar rapidity at the attendant, who looked on with his arms crossed. Tyler crouched when the guns went off, hands over his head, his crotch warm from pissing himself. There was a high-pitched noise—ringing in his ears from the guns—but also something that came, unbelievably, from his throat. A high, almost inhuman keening.

“You wanna die over this, boy?” said one man. Tyler couldn’t see which one. He was crouched over the small puddle of piss around his shoes. The attendant’s voice stayed calm.

“Then turn the goddamn pumps on!”

“I hit the silent alarm as soon as you pulled up. You should probably get going.”

Boots paced and the men's stances shifted, then Tyler heard a single, "Shit!" and the jingle of the door. The wail of police sirens grew and Tyler stood up in time to spot the last of the men climbing into a van, plastic drum in tow. The vans peeled away, disappearing from the view of the window. A few seconds later, two police cars flew by in pursuit.

The attendant watched them go, then grabbed a roll of paper towels from under the counter and tossed it to Tyler.

“Clean that up, please.”

He wiped it up and offered to mop, but the man shook his head.

Tyler’s mouth fell open. “So why didn’t you do what they said?” he asked. “They could’ve killed you.”

The attendant gave a small shrug. “Maybe. But to hell with them. They can work for it if they want it so bad.”

Tyler left the counter, moving with all the grace of a sleepwalker. When he got to the door, the clerk pounded on the plexiglass, and Tyler stiffly turned to him.

“Hey, you still want the gas?”

More stories from Garrett Warren and writers in Fiction and other communities.