by Sarah Shea 4 months ago in Short Story

Hope is the thing with fur 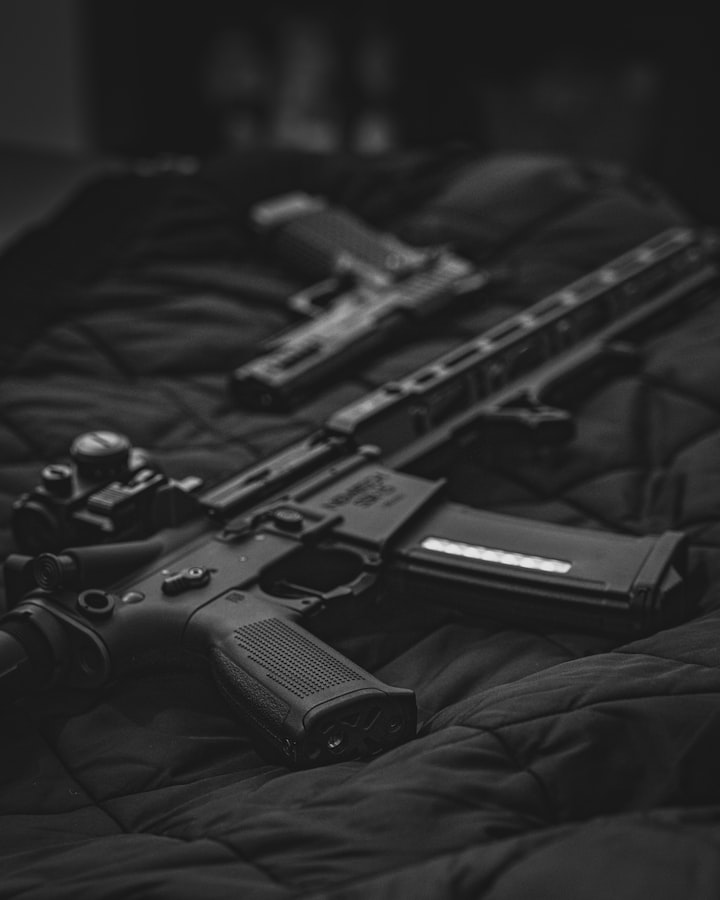 Photo by What Is Picture Perfect on Unsplash

A dog barked. I crossed the rooftop in its direction, stepping over detritus that stirred lightly in the breeze and walking in a diagonal so I could look down different streets until I found the animal among the piles of refuse and corpses that lined the street. The bullets in my pocket clinked against each other as I lifted the sniper rifle, keeping my head as low as I could, and peered through the scope.

It tucked its tail between its legs as it limped down the street, favoring a rear leg. I could count its ribs and vertebrae from the top of the twenty-story office building, but I couldn't tell what breed it was under the dirty, matted fur.

Remembering the coil of rope I'd stashed under my pile of clothes—along with some bandages and canned goods—I opened the door to the stairwell. I had to tug hard, and it squealed loudly in protest.

"Vera. What's going on?" Carlos's voice coughed out of my radio. I could hear Susan's voice in the background.

"What do you guys think of getting a guard dog?" I asked.

The static went on for so long, I thought he hadn't heard me. Then, "Dogs make noise. They eat. It's not worth it. And they stink."

I thought about doing it then. Shoving all my hoarded provisions into a bag, rope in hand and whatever meat or bones I could find, and taking the dog with me. Before the world ended, I was born in this city and grew up in this city. I didn't want to die in this city.

But the sniper rifle was merely a glorified telescope in my hands. If I left by myself, dog or no dog, I would die in this city. Not to mention, as a woman I would have to worry about more than just getting killed.

Instead, I let the door scream closed in answer.

"Enough. You want someone to hear you?"

I ignored him and sat at a different post so I wouldn't be tempted to look for the dog again.

I was ready to leave yesterday. I was at the stairwell, practicing what I would say to Carlos and Susan to either convince them to come with me or say goodbye. I was even planning on looking for the dog on my way, when I heard shouts.

Following the noise back to the ledge, I spotted four figures barreling down the street at least twenty blocks away, dodging garbage and carrion as they ran. It was windless and bright that day. Sunlight reflected off of something gold on the lead runner.

I brought up the scope and struggled to track them, wishing that Carlos had found a tripod with the stupid gun when he'd stumbled across it. The person leading the charge was a woman, that much I could tell, and they were headed straight toward us.

She ducked into a side alley just as I reached for my radio and wove between buildings before popping out several blocks over. The other three scrambled to keep up at first, pausing to listen for her footsteps a couple of times, but she yelped and fell hard to the asphalt. They closed in on her, kicking viciously. I could hear her cries from here.

Fumbling in my pocket for a bullet, it occurred to me that I wasn't sure I knew how to load the rifle.

I pulled at mechanisms until something popped open and shoved the bullet in, pretty sure that the pointy end should face out the weapon's barrel.

I peered down the sight again. They continued kicking at her.

Bracing myself for the enormous boom, I pulled the trigger and heard a click.

I shoved the magazine open and fidgeted with the bullet some more. I was pretty sure I got it in the chamber that time.

Heart pounding and arms weak, I checked the scope once more. One man was pawing at her waist. My gut dropped to the roof below me.

I could have sworn she looked right at me—some corner of my mind was calm enough to think that maybe the sun reflected off the scope or maybe I was delusional—and I saw her mouth move. I wasn't sure what she said, but I convinced myself that she was asking for help.

I pulled hard at the trigger.

Sound exploded from the rifle and knocked me back onto the roof.

But to be fair, I wasn't trying to shoot anyone.

I left the gun on the roof and stood up, clutching at my sore shoulder. My ears rung and felt like they'd been stuffed with densely-packed cotton. I didn't need the scope to see the three retreating figures and the lone woman lying in the street, motionless.

The radio vibrated in my hand when I grabbed it. It wasn't until after demanding a ready vehicle downstairs that I realized Carlos must have already been questioning why I'd fired an emergency-only weapon.

I skipped steps, passing Susan's panicked face on the way to the ground floor. Even if my hearing wasn't still recovering, I would have ignored her. Carlos's voice reached me as if I were underwater, but I pretended I couldn't hear when he screamed at me from the driver's seat. I shouted instructions over him.

It took longer than I thought to find her. From up on the roof, it felt like I could fly straight to her in two minutes, but it was at least half an hour before we found her crumpled form. We nearly drove past her.

She was unconscious and filthy, but looked to be in her thirties under the blood and black eye. A heart-shaped golden locket dangled from a chain around her throat and lay tangled in her hair. Her jeans were unbuttoned and unzipped. I cut the backpack from her shoulders and slid it out from underneath her, trying not to jostle her head and neck too much. I tossed it into the truck, its contents dully thunking together, and laid out a blanket beside her.

She stirred and groaned, eyes fluttering. When she tried to move, she groaned louder and clutched at her stomach.

I gently lifted her shirt to reveal ugly bruises purpling her skin. Carlos sucked in a breath behind me.

The woman opened her eyes and looked from Carlos to me. Her lips moved and I could just barely hear her breath hissing.

"What?" I asked. I brought my head closer, tilting a still-ringing ear to her mouth.

"You have horrible aim."

I barked out a short laugh and Carlos smacked me on the shoulder. I must have been too loud.

"Bold of you to assume I was actually aiming."

Carlos, after some begging, helped me roll her painfully onto the blanket and carry her to the truck. I sat in the bed with her head in my lap, hoping that it would help her breathe easier. I held her hand and tried to keep her talking and awake, but she drifted in and out of consciousness with each bump of the vehicle.

From her mumblings, I learned that her name was Alexis and that she was sorry. I'm not sure for what.

Getting her up the stairs proved impossible, so Carlos went ahead to get Susan and some supplies. I refused to let go of her hand.

Susan was a nurse before the world ended, but she shook her head as soon as I lifted Alexis's shirt.

"That kind of internal bleeding would need surgery. I don't have the knowledge or the tools."

Carlos stood behind Susan, peering over her shoulder. Upon hearing her diagnosis, he scowled at me, somehow managing to look both sympathetic and chiding.

"You know that rifle is for emergencies only."

I couldn't pretend to be deaf anymore, so I had to listen to the others tell me what I couldn't hear or refused to hear before. They were convinced that everyone within a mile radius now knows three things: our location, our best weapon, and the fact that we're down one bullet.

"It's only a matter of time before they make their way over here to see what other goodies we have," Carlos said. "Stupid," he muttered under his breath.

Susan shot him a look. "She was trying to do the right thing."

"But that gun is for our emergencies." Carlos pinched the bridge of his nose. "We'll have to leave."

"I'm not leaving her," I said, surprising all three of us.

Susan's mouth hung open for a moment before she turned to Carlos. "She's too injured to travel."

Carlos raised his arms in a "So what?" incredulous shrug and I turned my back on both of them. I knelt beside Alexis, taking her hand again, and pretended that I couldn't hear them arguing in stage whispers behind me. Eventually, they gave up and dispersed.

Alexis squeezed my hand. "They're right, you know."

"You should be resting," I said, avoiding her good eye.

"Does it matter?" I asked, because I didn't know.

"You wouldn't have done it unless you had a good reason."

"Both can be true." She started to shrug, and then winced. "It was stupid. A waste of your resources. And it put all of you in danger. But it still mattered. It matters to me. At least I can die with someone who cared enough to try to save me, instead of in the streets with those thugs."

We were both quiet for a minute. I think she passed out again.

"What's in your locket?" I asked when she stirred again.

Her hand went to her throat. "My greatest love." She pried it open and showed me a picture of a golden retriever, panting happily at the camera.

I couldn't help it. I smiled.

Alexis smiled weakly and managed to point at me.

Alexis died the next day. We had to leave her at the foot of the stairwell. I tried to tell myself it was better than leaving her in the street.

I took her backpack, filled with canned food, a half-full canteen of water, and a manual can-opener. I added my own provisions that I'd squirreled away and helped everybody else pack whatever they could carry.

"Where to?" Susan asked.

I followed a little behind the two of them, rubbing my thumb over the locket around my neck.

Receive stories by Sarah Shea in your feed
Sarah Shea
Read next: Between Stardust and Saltwater