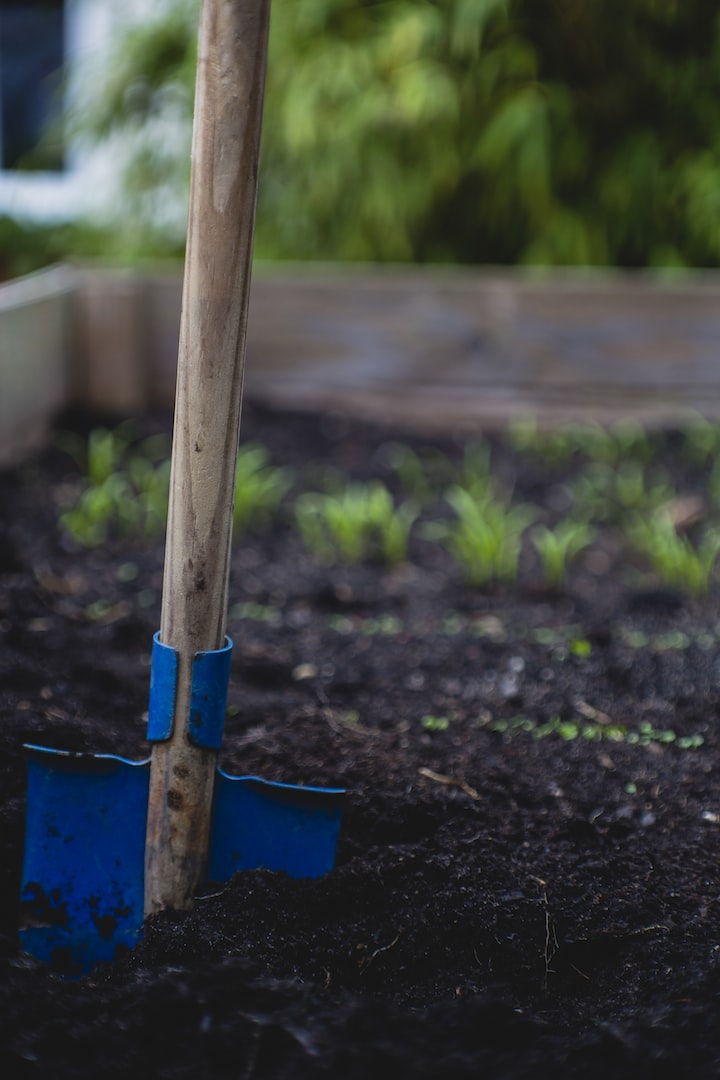 I hate the pea shoots. I hate the tiny, feathery carrot tops. I hate the garlic sprouts. Looking at the tops of the radishes peeking out of the soil makes me want to sob into the dirt until I’ve salted everything and it all dies.

This garden isn’t mine.

This wooden frame, these layers of compost and soil, the parade of marigolds around the edge to keep the bugs and bunnies off - this is Ben’s garden. We were going to grow a million salads this summer. He was going to teach me everything he knew about vegetable planting and wild harvesting until my thumbs turned green.

I don’t even like radishes. He promised that he’d find a way for me. He described fancy hipster avocado toast with thin slices of radish on top, sprinkled with salt. Salads with creamy sesame dressing, perfect for standing up to their sharp bite. He spun me a fantasy of radishes, and I believed every fucking word.

I want to yank all the radishes out and leave them in a box on his doorstep with a note. I don’t know what the note should say, but it should definitely convey that I am absolutely FINE without him, and the garden has been growing MARVELOUSLY since he left, and the marigolds definitely do not have some kind of weird fungus and the cat has not been using the garden as a litter box.

This note needs to be a better liar than I am.

ESPECIALLY when he was caked in sweat and filth.

I swear I don’t still think about the way he used to kiss my neck, or the feel of my knees melting. The way he loved it when I grew my beard out and he’d cup my cheek in passing, the way you’d casually pet a dog’s head. The way I leaned into his palm when he did.

Or the way he alone was allowed to call me Kev. The way it seemed spill out of his mouth, the easy, casual way he nicknamed me, marked me as lovingly as he did his stupid fucking garlic plants.

We built that garden box in the fall so we could plant those bulbs of garlic and let them winter over. He said garlic was a good one for hope. Every plant had some kind of spiritual meaning, some second purpose beyond being edible. Peas for tenderness. Marigolds for protection. Radishes for newness.

I used to think it was cute when he talked like that.

If you ask what broke us up, he’ll shrug and tell you the season had turned. Like our relationship was a fucking tree whose leaves were destined to fall and rot in the ground.

If you ask me when I’m sober, I’ll tell you it was mutual, that we were going in different directions.

Catch me compromised, and I’ll tell you: he never needed me.

Ben is expansive, overflowing, like his damn vegetable gardens. He showers you with onions and compliments, with adoring grins and homemade pesto.

Me, I love like a houseplant that will bloom once every ten years and require fussy maintenance and coaxing in between. You have to love the practice more than the results.

Ben is used to people flowering in his presence. He’s got a relentless optimism, and a bone-deep curiosity about people that makes you feel like the most important person in the room.

Catch me comfortable enough to tell the truth, and I’ll say: when I saw the way he could make anyone feel special - our friends, family members, strangers in line at the post office - I panicked. Jealousy grew almost spontaneously, the way morning glories take root and climb other plants and you don’t even realize it until one morning the tomatoes are covered in gorgeous purple flowers.

Jealousy is not a good look on me.

It baffled him, like a blight or a fungus he couldn’t figure out. He tried, but sometimes you have to uproot and transplant anything you want to save from an infested spot.

Why he had to transplant himself all the way to North fucking Carolina is one I’m still hurting over.

I hate this stupid garden.

I hate it so much I’m going to take pictures of everything in it and see if the people at the plant store - the one where everyone knew Ben by name and smiled at me like I was dating Jesus - can tell me how to fix it. I hate it so much I’ll take the hundreds of plastic takeout forks that live where my silverware should be and stick them in the dirt to keep the cat out.

Maybe I’ll dig the whole thing out and start over. And when my friends come over for brunch (if brunch is ever a thing we’re doing again) I’ll serve them avocado toast with really thin slices of radish on top. Maybe I’ll take a lover who likes carrots, and I’ll be able to pull them an entire bouquet of orange and yellow and purple and tell them: I grew this. For you.

By day, I'm a cooking teacher, foster parent, cog in the nonprofit machine, and poet. By night, I'm a creature of the internet. My soul is that of a grumpy cat who'd rather be sleeping.