A young woman suddenly finds herself embroiled in a murderous conspiracy 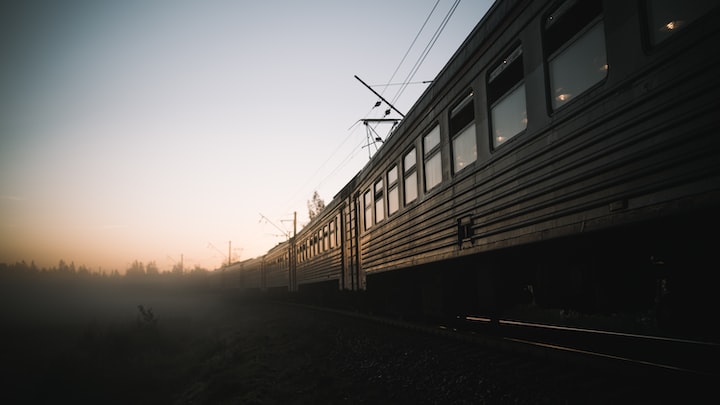 Photo by Andrey Svistunov on Unsplash

The question of concern was directed towards a young brunette woman who was slowly opening her eyes and regaining her consciousness. She saw an image a dark-haired man looking down at her--the very man who asked about the woman's well being.

The woman looked at her surroundings and saw she was on a train that was going at a high speed. So she had the "where" figured out before she could ask, but her memory was still quite damaged. She had no idea how she got on the train, but somehow, she suddenly felt she belonged there. After taking a look at the very man who checked on her, she started to act as if he was familiar to her.

"Have I seen you somewhere?" she asked. "There's something familiar about you, but I can't seem to figure it out." The woman slowly got back up to her feet, with the assistance of the male passenger, who took her to his seat on the train.

"Thanks for coming to my aid," the woman said as she looked at her fellow passenger. "I still feel like I know you somehow. What's your name?"

"Simon," the man replied. "Simon Pasternak." Hearing Simon's name drew some alarm from the young woman, but just as she began to sense the pieces coming together, an exasperated look showed that nothing changed regarding her memory.

"It's OK," replied Simon. "Hopefully, it will come back to you."

"I don't know," the woman replied, "I don't even know my own name, or how I ended up on this train."

"Well, you have to have some form of identification on you," said Simon. "Can I see it?" The woman searched her pockets and took out her wallet, which contained her driver's license and a college ID card, both of which had the same name:

Simon read the name out loud, which was followed by Caitlyn looking right at Simon with the same expression of familiarity. "I know that college," said Simon, "My wife is the headmistress." Simon took out his wallet and showed Caitlyn a photo of himself and his wife, doing so in an attempt to help Caitlyn regain more of her memory.

"You have a lovely wife," said Caitlyn. "What's her name?"

"She was adamant about keeping her maiden name," said Simon. "I didn't protest. We've been married for eight years, but..."

"I really don't like to think about it," Simon said fretfully, "but I can't deny it. I think Rochelle's having an affair." Caitlyn gave a shocked expression in response to Simon's admission, and after showing relief over finally telling someone about his marriage problems, Simon continued to vent.

"Not only that, I think my wife's lover is one of her students. In fact, I know it."

"How do you know?" asked Caitlyn.

"Because he tried to kill me," said Simon. "I was nearly shot in my own home, and the guy had on a hoodie that had the school's logo. I mean, seriously?"

"It's why I'm on this train," said Simon. "I need to report this, and I need to be in a safe place. For all I know, Rochelle could be aligned with the guy."

"Or girl," commented Caitlyn. The train stopped at a nearby station, where Simon rose up and got off--looking at every direction before finally leaving the train. He later headed towards the direction of a rental car he had waiting for him, but just as he was about to enter, a loud scream caught Simon's attention. Simon turned around, and to his shock, he saw Caitlyn running towards him.

"Simon!" screamed Caitlyn. "Simon, help!" Caitlyn approached and hugged Simon, who was still processing the panic shown all over her face. "Someone's after me!"

"I don't know!" replied Caitlyn. "I think it was a blonde woman, I couldn't get a good look at her. Simon, I'm scared. You're the only one I know right now." Without hesitation, Simon took Caitlyn with him in his rental car, and drove off in a rush. Despite the lack of a description, Simon had the feeling that the woman Caitlyn was describing was Rochelle, and that she had decided to get her own hands dirty in her quest to have her husband eliminated. The pair reached a hotel and decided to hide out for safety, with Simon paying his way in before entering.

"We should be safe here," said Simon.

"Thank you so much," a grateful Caitlyn said. "I feel like I owe you so much."

"You don't owe me anything," said Simon.

"Well, at least let me make you a drink," pleaded Caitlyn, who later went to the minibar while Simon turned on the TV set. The channel that appeared was a news broadcast, which reported that a college student, Madelyn Hall, was found deceased on campus grounds. Once Caitlyn returned to with the drinks, she turned her attention to the report on TV--giving a somewhat blank stare before turning off the set and giving a glass to Simon.

"You knew her, right?" asked Simon. "You two attended the same college." Caitlyn took a sip following Simon's query, and gave a deep sigh as she looked at the man who rescued her.

"You know," Caitlyn said, "I don't think anyone would have seen a random woman with no memory on a train and respond the way you did. So many people walked by me, but you didn't. You took care of me. You checked on me, you rescued me. I just want to thank you."

"It's no problem," Simon said as he took his own sip.

"I mean, you are an absolutely good guy!" laughed Caitlyn. "Rochelle truly was right about you: you're a pushover." The last statement took Simon by surprise, but his reaction changed into a feeling of dizziness. As Simon made attempt after attempt to regain his composure--and fail every time--Caitlyn simply looked at Simon with a sinister expression.

"Oh come on!" Caitlyn smirked, "I didn't put that much in your drink, did I? But again, I want to thank you so much, Simon Pasternak, because of you, I was able to regain my memory, and my focus has returned."

"A couple of months," replied Caitlyn. "That's how long we've been seeing each other. I tried to tell you, Simon...she could have been seeing another woman." Caitlyn smiled evilly as she watched Simon take his last breath, but her fiendish pleasure was interrupted by a knock on the door, with Caitlyn answering and being happy to see who was on the other side.

The person at the door was none other than Rochelle Bergeron, who entered and looked around the room, before finally turning her attention to her now-deceased husband. "Look at you," Rochelle snarled. "You really thought you were good enough for me. You're pathetic--you always were."

"I know," said Rochelle. "I'll take care of that...just like I took care of her. Imagine her listening in on our conversation, knowing about us. Just one obstacle to get out of the way."

"And Simon was the last," Caitlyn said with a sinister smirk. "Now all we have is each other." The nefarious and bloodthirsty lovers celebrated the success of their murderous quest with a passionate kiss, before leaving the room hand-in-hand. Rochelle and Caitlyn looked to get away from their scenes as quickly as possible, and in a twisted expression of symbolism, the couple decided to take the next train out of town.

Thank you for reading this story all the way through! If you liked this story, click the heart, click "subscribe" if you love it and want more! Tips and pledges would be immensely appreciated, as they help support my writing, but no pressure!

Born on March 18, 1985. I am an avid fan of sports and wrestling, and I've been a fan of female villains since the age of eight. Also love movies--especially comedy and horror--and among my favorite TV shows are The Simpsons and Family Guy

More stories from Clyde E. Dawkins and writers in Fiction and other communities.