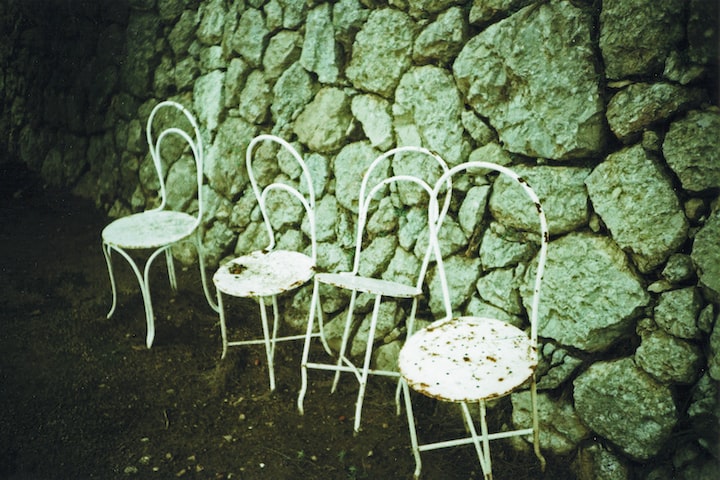 Photo by Scott Evans on Unsplash

“Hello, and welcome to Cursed Anonymous. I see we have a lot of new faces today, so how about we go around the room and introduce ourselves. I’ll go first. My name is Midas, and I’m cursed with turning everything I touch into gold.” He gestured toward the man with a thick beard to his right. “Next?”

The man with the beard, arms crossed, rolled his eyes and slouched down in his seat. “Name’s Jack. I turn into a wolf on the full moon.”

Several people sitting around the circle of chairs in the rec center nodded in understanding.

“Looks like we have a lot of werewolves with us today,” Midas said. “Seems it’s a very common…uh… Jack? Did you escape last full moon?”

Jack slouched further into his seat and did not respond.

“That’s fine, that’s fine,” Midas said. “We can’t help what the curses force us to do.” He picked up his cup of coffee, which immediately turned to gold. “Son of a— It’s okay. It happens.” He took a deep breath. “Moving on. Next?”

The young woman sitting by Jack sat up a little straighter. “My name’s Ruri. This is my first time here. And, uh, I’ve been cursed by a video I watched.”

Shocked gasps went around the room.

“That’s the thing where a demon crawls out of your TV, right?” said another CA member, Rosemary.

Midas furrowed his brow. “Wait…but doesn’t that mean it’s going to kill you?”

“Oh, no.” Ruri shook her head. “It’s not that kind of curse. This demon just follows you around and makes outdated jokes from old late night talk show monologues.”

“If they let him off because the gloves don’t fit, the judge’s a half-wit!”

“No one knows what you’re talking about!” Ruri shouted over her shoulder at the sickly pale man standing in the shadows behind her.

A middle-aged man with a moustache cleared his throat. “Hello, my name is Howie. I’ve been cursed by a mummy’s tomb.” He started coughing violently into a handkerchief.

Everyone around the circle shifted uneasily.

“Sorry, sorry,” Howie said, wiping his lips. “I also have a bit of a cold. Now, I know what you’re thinking. Is this one of those death curses? But no, it’s not.” Howie cleared his throat again, his face growing red. “The mummy cursed…something else.”

“It…it cursed me with…” Howie trailed off, mumbling.

“With what?” Jack said, grinning mischievously.

“Mummy penis!” Howie said loudly. “It cursed me with a mummy penis.” He glared down at his crotch. “It’s just not fair.”

A woman with long black hair, pale skin, and red lips stood up. “My name is Anne, and I have been cursed…with beauty.” She struck a pose.

“Anne, we’ve talked about this—”

“I kid, I kid,” Anne said. “No, but really, I’ve been cursed to feed on human blood to keep me alive and immortal. Oh, and I can’t go outside during the daytime or whoosh.” She mimed a fireball. “So, yeah, that’s me. Vampire!” She struck another pose then sat down.

“Anne, a margarita, and Ricardo Montalbán,” the Late Night Demon said, holding a piece of paper to his forehead.

“Shut up,” Ruri hissed and threw her empty coffee cup at him.

A woman with short blonde hair, aged anywhere between mid-twenties to mid-thirties, waved at the group around the circle. “Hi, my name is Kaylee, and I’m cursed.”

“Is that it?” Midas asked. “Did you want to elaborate? You don’t have to—”

“Oh, I guess I should explain,” Kaylee said. “You see, I’m cursed because the worst thing that can happen, always happens to me.”

Jack scoffed but Midas glared at him.

“What do you mean, Kaylee?” Midas asked. “It sounds like it’s not really a curse, just some bad luck.”

“No, you don’t get—” Kaylee shifted forward in her chair and the chair broke. She toppled into the person next to her, Ron the Fire Starter, who promptly burst into flames. The fire quickly spread to a pile of cardboard boxes that had been pushed aside for the meeting. The boxes contained fireworks for the upcoming Fourth of July picnic. The fireworks exploded, setting the entire room ablaze.

“Crap!” Midas grabbed the fire extinguish, which then turned to gold. “Crap!”

Everyone ran screaming from the room as the sprinklers finally came on but failed to put out the raging inferno.

Midas looked at the ruins of the rec center. “Uh, see you next week, everyone…”