by Sheila L. Chingwa 5 months ago in Fantasy
Report Story 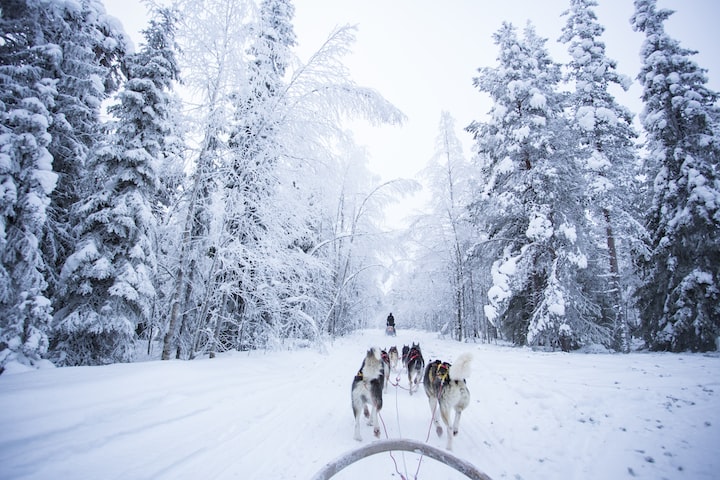 Photo by Robert Tjalondo on Unsplash

Christmas eve, Markus rose with a start. Wolves were howling through the woods. He quickly grabbed his gun and pulled on his pants quickly. He rushed through the house to the front door and squinted to peer through the darkness. He could see wolves darting back and forth playing in the snow. In the distance, he heard another howl ring through the trees and all the waiting wolves sat down on their haunches and waited. A moment later, a sled team was coming towards him. Along side the sled, he saw Ralph jogging along aside a dog sled. With a quick turn, he ran back into the house.

"Wake up everyone! Sarah! Sarah is home!" His loud voice rang through the cabin and everyone rushed to meet them.

The dog sled was pulled by wolves, all of them seemed to be of great esteem of their pack. When the sled passed the waiting members, the brethren of the pack howled as if they were singing to them in honor. Markus had never seen such a sight and marveled at the moment. Once the sled slid to a stop, Ralph unfastened the tethered wolves and they ran off to join their pack. He smiled as he watched them hopped, skipped, jumped and played with members of the pack.

Ralph uncovered the sleeping child and she rose sleepily from the sled. As she rose, Markus could see the child did indeed have a quiver tied to her back. Sarah straightened her jacket and turned to face her friends with a smile and she ran to greet the onlookers. She flew into Markus' arms and held him tightly. The boys stared in amazement as they watched the wolves run into the wood. The two women, with open arms, welcomed her home and escorted the two weary travelers inside.

"What an adventure that was." Growled Ralph. "This child has caused a great wear on me." his spike like grin shown brightly. "When Jack asked me to watch over her, I never had any idea that I was taking on this huge job." He lowered himself to the floor in exhaustion. "Markus, can I rest in the barn for the night? I need room to spread out."

With a chuckle, Markus pulled on his jacket to go to the barn to get the yeti's bed ready in the barn. "Let's go my friend, I think we better get your resting. I know you and Sarah have traveled a long way."

The two women tended to Sarah. In the midnight hour, they escorted her to her room. The quiver would not unfasten for them, yet, when Sarah touched the buckle, it loosened at her touch. Sarah laid the quiver by her bedside and she dressed in her gown. With a yawn, she ate upon the woman's command, and snuggled into her bed. As the ladies closed the door, they could see Sarah was safe and secure as she held her treasure as she slept.

Sarah woke to the smell of breakfast. She could smell bacon, biscuits, sausage and coffee lofting through the air. The boys were laughing at the table as they seemed to be happier than normal. She walked out to the kitchen and she could see the cabin was all decorated with Christmas decorations. The tree was sparkling in the corner and gifts were stationed under it.

Sarah's eyes danced around the room at all the decorations. She sat down at the table as the boys stopped and stared at her and her quiver. Sarah hadn't even notice that the quiver followed her and sat next to her. They looked at her and eyed the black feathers resting above ledge of the blackened and gold plated leather. Sarah took notice of their expression and smiled.

"Would you like to see them?" Sarah waited and saw them nod. "I never thought I was meant for these." She retrieved one of the arrows from the quiver and laid it on the table.

The long black shaft seemed to shift and move almost like shifting clouds. Once the boys watched it closely, they could see that it was the light catching the shaft. The black fletching was trimmed into points. They looked so sharp to the touch. Chavo reached out to touch it and the arrow lifted itself and returned to the quiver.

"They don't like to be touched. I can touch them but no one else can." Sarah shrugged as she watched it settle back into the quiver.

"We have heard that you are being called the Wind Witch." said Chavo.

"Yes, the yeti's made sure I knew my new name." frowned Sarah.

"It's Christmas. No frowns are allowed here." said Verna with a giggle.

"Christmas?" Sarah looked around the house. "Today is Christmas?" I have been gone for four weeks?

"Oh yes, we waited a long time for you to return." Said Mary.

Markus wander out from his bedroom and plopped down in his chair. A cup of coffee poured itself and set itself in front of Markus. He rubbed his eyes and groggily looked around the table. It was obvious that he had a long night for sleep was still lingering in his eyes.

The meal was devoured in a matter of minutes and the dishes were washing themselves in the sink. Mary and Verna sat down to relax as they sipped on their coffee. Markus sat almost drowsing back to sleep. The boys, however, were wide awake and raring to go.

Peter wrote, "Is it time?" he passed the note to Markus.

Markus handed the note to his wife who read the question and smiled. With a wave of her hand, gifts flew through the air and landed in front of the boys.

Paper began to tear and Chavo held up spear. The spear was long and lean with a flint tip. He held the in his hand and found it to be well balanced. His eyes followed the shaft of his spear to the point. Sharp edge sliced his thumb and began to bleed. Verna rose and rolled her eyes as she retrieved medicine and a bandage to tend to his cut.

Peter looked at his gift in front of him and began to unwrap the treasure within. Inside a box, he found a belt woven with beads and knot decorations sewn into the leather. In front, there was an empty space. Confused, he picked up a note that said,

This belt was made with knot magic. Once you place the spider coin into the open space, you will never lose it. Wear the belt at all times for the best protection.

Peter retrieved the coin from his pocket. He slipped the spider coin into the open spot. Before he could look away, he saw the loose threads wrap around each other and securely cinch together. he watched as the ends and tucked themselves into the weave and disappeared. He slipped the belt around his waist and it cinched itself tight. In front, the spider symbol was displayed nicely. He smiled knowing it would be safe and sound. If the old Crone was there, he would have given her a thank you hug.

From the corner, a long package lofted through the air and came to a rest in front of Sarah. The boys and Markus began to smile from ear to ear. Their eyes watched closely as Sarah's hands unwrapped the package. She could see the wooden longbow emerge through the paper. Her eyes widened as she picked up the bow to admire the fine work the men had done. The ash longbow was the finest thing she had ever seen. Sarah was stunned by the designs imprinted on the limb and the leather on the handgrip was soft to the touch. Her hands ran over the length of it admiring their work.

"Thank you! How did you make this?" She said looking from eager face to another.

The boys talked about Jack's and Tyrone's visit. The beating the ash tree into strips, the drying of the wood through magic, and the shaping of the bow. They told Sarah how Dragonfly would come and test the limbs for safety as they dried. They talked excitedly about the whole event. Sarah listened as her eyes feasted on the bow.

A knock on the door sounded and the yeti walked into the cabin. In his giant pawlike hands he had a package. With a silly smile, he handed the package to Sarah, "Here little one."

Sarah opened the package to see strains of long white fur. Strains and strains of fur lined the paper laying on the table in front of her. She looked up at her friend and could see the areas where his fur had been cut. The yeti shifted almost embarrassed as the young girl looked at him.

Sarah rose from her chair and walked over to the beast, "Thank you Ralph. For everything you have done for me. She looked down at the package, how do I make a bowstring with this?"

With a wave towards the old crone's cabin, Ralph said, "With knot magic. The old crone will teach you."

"That old bat has made us do nothing but tie knots. I know we are making a fishing net, but that's all we do. In silence. We tie knots all day." said Chavo with a frown.

Ralph snapped and turned towards Chavo. "That old crone is not to be disrespected young man." He took a couple steps toward Chavo. "She is a well respected elder. Don't you forget that." He lowered his large face to Chavo, "Next time I hear you say something disrespectful about her, I will feed you to my wolf friends." The beast stood to his full height and glared at the boy who wouldn't make eye contact with the beast.

"I am sorry. I will be more mindful." He stopped and looked up at the beast, "Imagine sitting there for hours tying knots. My fingers are so sore and they bleed most days." said Chavo.

Verna stopped and turned to look at the boy. "Are you telling me that you have sores on your fingers? Why in the love of god didn't you tell me? I have a salve for that ailment." She rushed off to her room and brought back a bottle of ointment and began to treat the boys' fingers.

Sarah watched as other's opened their gifts. She was saddened that she had nothing to give. However, she noticed that everyone was happy to see the gifts of love being unwrapped around her. In many ways, her being home, was the gift she gave to them. She knew she wasn't forgotten while she was gone.