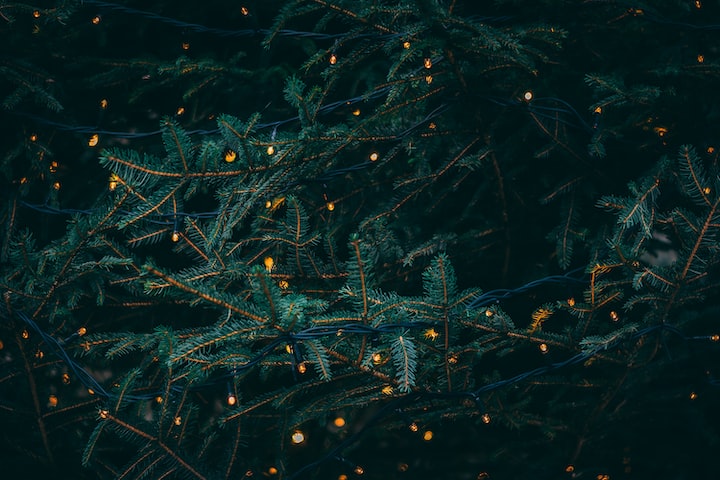 Photo by Kieran White on Unsplash

Markus stared at the empty seat at the table where Sarah sat. Days had passed and there was no news of her safety. Jack had assured that she was totally safe if Ralph took her to the Hovel. They boys were unusually silent as they picked at their roast beef dinner. The days with the crone seemed to challenge them for some odd reason and they sat silently considering the daily lesson. Markus scooted his chair back creating a loud noise with his chair.

"I know we all are missing Sarah, but it is time to get ready for Christmas." said Markus. "Go and get your gear on so we can go and find a nice tree for the house."

Mary smiled at her husband as she watched the boys get up out of their chairs and rushed to their rooms to get dressed in their warm clothing. They could hear Chavo laughing as he dressed and they could hear Peter shuffling around. Soon, the boys came out of their room bundled up in heavy sweaters and layered pants for trudging through the snow. With a small spurt of chaos, the men headed out the door leaving Mary and Verna behind.

The moon light shone bright and the cold air stung at their exposed skin. Marcus inspected the boys and pulled their hoods up over their heads. He could see that their breath was already collecting frozen ice on their scarves. With a wave of his wand, an axe, rope and saw appeared and floated near the boys.

"Will you two carry those for me?" Markus said. "I'll carry the rope. I want you two to hang on to it so we don't lose each other."

The snow glistened in the moon light and the path to the crone's house was clear. Step by step their boots crunched through the snow announcing their position as they proceeded through the woods. Sarah's snow storm brought in so much snow that trudging through the snow was difficult for the guys. As they passed the crone's cabin, they could see her tending to some of her chores. She smiled and waved as they walked down the path.

Soon, Markus drew to a stop. He waited for the boys to catch up with him. The moonlit glens spread before them. The trees' shadows cast across the snow and the men just stood to take in the moment. After a moment, Markus took a knee and coaxed the boys to do so too.

Markus bowed his head and close his eyes. The boys watched him as he began to shimmer. At first, the boys thought the moon's light was glowing on his back until the light spread out in front of them. Radiating light traveled through the snow and into the trees. The boys watched as one tree began to glow. With a smile, Marcus opened his eyes, to view the tree that agreed to be their Christmas tree.

"There we go boys, let's go and meet our Christmas tree." said Markus with a gleaming smile.

"Of course I am. I am connected with the trees. I asked them to choose one to be our tree this year." He smiled as he looked at the tree. "Just so you know, it hurts me when a tree is cut." he looked down at the boys, "When I am connected I can feel and talk to the trees. However, the pain can be soothed and I try to make it hurt less for them. They are all connected you see. So, it will be your job to cut as I work to sooth the others." He looked each boy square in the eyes. With a nod, he set off for their Christmas tree.

Marcus kneeled at the trunk of the tree and laid down tobacco in thank you for the gift of the tree's life. He nodded to the boys who began to cut at the trunk. With each blow or cut of they saw, Markus groaned and his light grew and emitted from him in waves across the woodland floor. Once the tree was cut, Markus once again laid tobacco in thanks and rose from his knees and led the boys from the woods with the tree dragging behind them.

Mary and Verna were busy popping corn for decorations when the boys entered the cabin. The cold air lofted in as the boys entered the room. Coats and boot moved to their place next to the fire and began to dry themselves. The boys sat at the table where thread and needles were laid for stringing popcorn.

"So, Markus, did you show off for the boys?" Mary handed him a bowl of popcorn.

"Yes, seeing that they were here, I could help the others not to hurt so bad." Markus said with a smile. "I love to give thanks that way."

Verna settled next to Chavo, "Isn't it an amazing thing he can do?"

Chavo's eyes widened. "He glows. His light just spread across the forest. Waves and waves of light." He said as he thrashed his arms about himself.

Peter's arms flew in the air as if cutting at a tree and light spreading out. Mary stood smiling as the boys accounted their version of the event. Verna's eyes danced back and forth between them and giggled.

"I was amazed the first time I had seen him do that too." said Verna as she picked up her needle and thread. "We were much younger when I saw it for the first time." She picked up a kernel of corn and pushed it onto the needle. "and, I had a hard time staying on task because I was amazed with the light."

"Oh I remember that. I practically had to cut the tree down myself." said Mary.

"Everyone has their own magic. I just never saw magic like his." Verna looked at the boys who were concentrating on stringing corn. "You know, energy magic, as you saw tonight, is different than the energy we use with our wands." The boys lowered their popcorn to listen, "Everyone's energy is different. Different wands uses different energy. Markus, must be part Native American because he connects to the energy of the earth. Trees are his friends. He communes with them and learns from them."

"Isn't that like Shinning Sun can grow plants even in the winter?" Said Chavo?

"Yes, she does indeed have that understanding but with plants." said Mary.

"So, I am Earth magic," wrote Peter, "I should be able to do something like Markus?"

"We don't know yet." Markus shook his head. "We know that you can work with fire skills, but you really haven't focused on your abilities. There is so many things on the earth that you may be able to work with." He yawned and stood up. "The old crone said you have shown promise with plants but she thinks there is more to you." He walked over to the tree and began to fix it to standing in an upright position and fasten it to the stand. "I can help, but right now, the earth sleeps. We'll play more with your skills in the spring." He stood back admiring the tree as it stood in the living space.

Mary sided up to her husband's side and hugged him, "Another beautiful tree my love." She went back to the table and began to help string the popcorn.