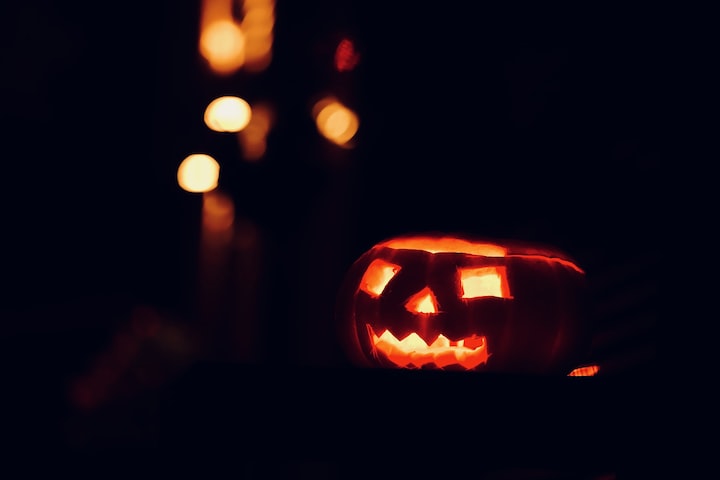 Photo by Miguel Teirlinck on Unsplash

I cut into the pumpkin’s flesh, taking off the top. I scoop out the seeds and guts. This part always creeped me out as a kid. It felt like what I imagined intestines would feel like. My brother would take a bite of the innards, pretending to be a zombie. My mom liked to collect the seeds to make snacks.

I just throw the stuff away.

Once the inside is all cleared out, I start to carve the face of the jack-o-lantern. I’m not a great carver. I’ve seen impressive, artful carvings online, but even when I try to use tracings, I never get it right. I tried to make a bat once and he ended up with half an ear and a broken wing.

So I always try to keep it simple. I do the easiest thing possible—triangle eyes, triangle nose, and a wide mouth with a few teeth. It’s basic, but it’s all I can do.

As I carve this pumpkin, though, I feel a sudden spark of inspiration. My hand moves as if guided by something else. I cut out a face, something I didn’t trace beforehand, something I’ve never even thought of before. But there’s an image in my head, branded into my brain, and I am compelled to get it out.

I can’t quite describe the face. It’s terrifying, like something from a horror movie. It has so many eyes and teeth. I don’t know why I came up with this design. I don’t know where it came from. But it appeared in my head, fully formed.

Now, it glares back at me from the eviscerated pumpkin. I put an electric tealight inside and it glows dark red, like hellfire.

I place it by the front door for the trick-or-treaters to see.

But something feels off.

I keep going outside to look at it. I don’t know why. I stare into its many eyes, mesmerized…

No one comes by on Halloween, not a single trick-or-treater. I see a few kids pass the house, but when they catch sight of the jack-o-lantern they run away.

I go outside again, to look at the face. It glows like it’s burning, like a portal to some demonic world. I guess it is a little scary. But that face…

It’s still stuck in my mind. When I carved it, I thought I had gotten it out, but it’s still there, staring at me every time I close my eyes.

It’s in my head, and it’s also staring at me from the pumpkin. It stares and stares. Its eyes…

I think it’s telling me something. Its eyes are pleading…

It wants me to help it.

It needs me to help it.

I must make way for its arrival.

As I stare back into its eyes, I find that suddenly I’m holding a knife. There’s something red dripping from the edge.

It’s blood. But whose?

The face of the jack-o-lantern is red, painted in blood. The light inside is crimson fire. Its eyes and teeth point toward me. It looks pleased.

There’s just one more thing to do.

I raise the knife to my neck. I make a slice, like I’m carving a pumpkin, removing the top.

More blood soaks the porch as the world goes black.