The People on the Train 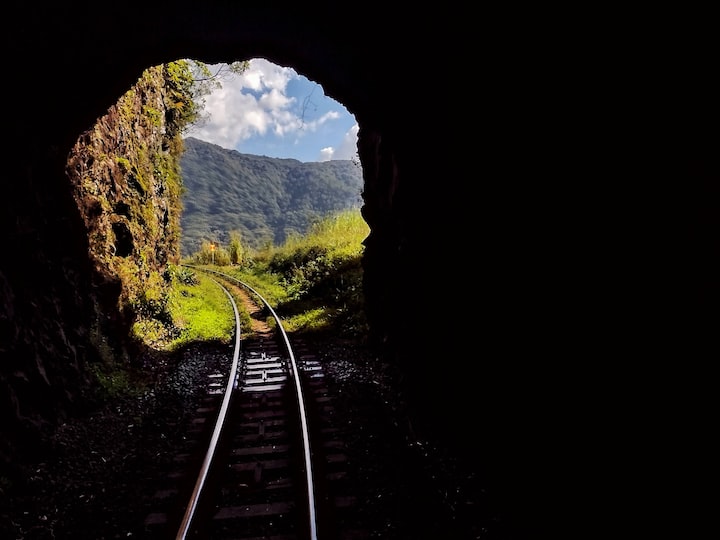 Photo by Sara Ferreira on Unsplash

November 11, 1969. It was an important year for many people, but to me it was more. I awoke to the sound of terrified screams. I immediately slouched down in my seat, slowly slid my blanket over my head and clung tightly to the wall next to me to make myself less visible.

I thought that my heavy breathing would reveal my presence, so I willfully stifled my breath. I was used to people's reactions; shock or even horror, but something felt different today. I knew in my gut that something was off. I slowly peeled my blanket away from my eyes to see the people in the train car in a frenzied state of panic.

The woman across from me was stooped over anxiously reciting an inaudible prayer over her cross-hands waving through the air over her head and across her chest repeatedly as she rocked forward and back.

A few rows ahead a mother was trying to calm her screaming children.

As I peered over the seat, I saw a group of hippies that I felt akin to, more calm and unbothered than the others on the train.

Most of the people were gathered around the door where a hysterical man yelled, “I’m going to jump! I’m going to jump!”! As he erratically banged on the glass looking for a way to open the door.

One well-dressed man at the front of the car stood authoritatively with his hands up trying to calm the chaos. He motioned people to the back seats and instructed them what they should do. I never made out what he said but came to the realization that our train had lost its ability to brake. We were on a runaway train!

At that thought, a sting of distress shot through me. Not because we had no brakes. (That came as a quiet wave of relief to me. I had had a hard life and lacked the desire to live it.) My shock came at the realization that I had no idea how I got on this train to begin with.

When I was young, I lived on the streets. At 17 I ran away from foster care, so I had become accustomed to drunken nights and long binges and waking up in unfamiliar places, but I had never woken up in a train because I avoided people at all costs unless I needed money. It was easier that way. People didn’t like me, and I didn’t like them either. They always let me down. They always hurt me. They treated me like the plague that I was. So, I accepted that.

I was born with a disease that left my face horrifically disfigured. Children were scared of me and adults, well; I think they were scared of me too. Ignoring me was the kindest thing anyone ever did for me. That’s why I can’t possibly imagine who was with me that led to boarding a train. I had no inkling but still, there I was.

The people in the car began to comply with the man in the nice clothes and shuffled towards the back, still in disarray, but trying to hold fast to a sense of order.

I shrank again and went back into hiding. I felt a warm body plop down and press against me. Closer and closer it got as more people filed in. Through a small hole in my tattered blanket, I could see that the back seats were being filled by people folding forward chest to thighs with their arms hugging their heads. I wondered if I should do the same. The atmosphere began to shift subtly. Feelings of fear and uncertainty still hung in the air, but there was a blanket of stillness gently folding over us. The calm before the storm. The quiet waiting.

It seemed like an eternity to wait that long and to not know what to expect. I felt the breath of the person next to me increasing in speed as I heard the man from the front yell, “Everyone take a deep breath now and try to relax!”

Crashing and crushing and twisting of metal infiltrated my ears. I was surprised that the shattering of glass could be so deafening, then I was surprised at my ability to think that thought in such insurmountable circumstances. My equilibrium was a discombobulated jumble.

Others around me were slowly evolving to standing. Faces were weathered and bruised. Blood and dirt decorated their clothing. They began to notice the people around them and to help one another.

A couple worked to free a man from the twisted metal around his feet and two of the hippies helped a woman with a head wound to a more comfortable position. I even noticed one of the children compassionately holding the hand of a woman that was slipping out of consciousness.

I began to notice a kind of invisible web connecting the people around me. It was more than a feeling. It was a tangible, profound sense of tenderness and affection towards one another that I had never before seen or experienced. Again, I wailed. I despised them all for caring for one another. Yet, I…. I longed for it too. I longed to be loved and to feel cared for, but I immediately shut that feeling off from within me. There was no sense in dreaming now. My attention snapped back to my throbbing side. I held it tightly and silently wept to myself like I had a thousand times before.

I began to feel tired. It was hard to keep my eyes open, though out of the corner of my eye I managed to watch as the last few people made their way towards the exit. Soon it was silent. I knew that this was the end. I knew that I was better left forgotten.

A muffled voice sounded. I could hardly discern the words until the voice came closer. “There’s another!! Come quick!”

I felt my blanket slide off of me, too tired to care who saw the monstrosity that lay beneath it. I weakly opened my eyes. It was the woman from across the aisle. To this day I cannot forget the kindness that I saw in her eyes as she stroked my face and smiled so tenderly. She placed her arm behind my back, noticing the wound on my side, then another under my legs. She ever so gently pulled my body closer to hers. There was a man by her side, the man from the front of the car. He reached out towards me, and I saw more silhouettes come into view behind him. They motioned more to come. Though I trusted the woman, the growing crowd felt threatening. I felt unsteady and my head became heavy.

My next memory is blurry. One of the hippies tore his shirt off and threw it over me. The man from the front of the train caught it and used it to apply pressure to my wounded side. I was then carefully placed down into the arms of many people standing side by side with arms stretched out in front of them to form a human gurney. They walked slowly in sync with one another towards the front of the train car.

In that moment I realized that the people weren't just holding me, they were embracing me. They carried me and they cared for me. They didn’t know they were, not only supporting my body, but they were lifting my soul. I could not comprehend why they were looking at me the way they did. I felt that they had the ability to look past my deformity and see me the way they saw other people. It was confusing as well as comforting. I had no more choice but to surrender to them and to trust them. I felt the black, thick steel walls around my heart begin to soften.

We pause for a moment and the woman from across the aisle placed her cross around my neck and sent me off with a kiss on the forehead.

We reach the mangled hole in the wall, and I was slowly transitioned, from one set of arms to another outside the train. As I flickered in and out of consciousness, I saw a young girl smile sweetly at me as if to say that everything would be alright.

Eighteen hours later I woke up in the hospital. I was surrounded by balloons, flowers and cards. I laid still for a moment taking in all the colors and smells swirling around me. Then I noticed the woman from the train sitting in the corner of the room. She smiled, walked towards me and held my hand. She then picked up a card with the name Carina on the front and began to read it.

"I'm not sure why I got on the train yesterday. I should have gone into work, but it felt as if the train was calling to me and I had no choice but to obey. When I realized we lost our brakes, I thought I was such a fool! I thought that I was going to die a completely unnecessary death. When we stopped, and I was still alive I was so mad at myself that I hardly looked around. I just left and vowed that I would never be so stupid again. As I walked away the feeling came back that I had been there for a reason. I decided to go back after the people cleared out and that's when I noticed you. I knew right away that you were the reason I needed to be there. I pulled the blanket down and when I saw your face, I knew your name. Dear one, you don't know it yet, but you have touched the lives of many and have much more to do yet. Love Dorinda, that’s me.”

Dorinda gave me a new name that day meaning “dear one.” And with that and help from the others on the train, I began my new life.

Hi. I’m a momma of 3 looking to do something that makes her heart happy! I’ve always loved journaling and philosophical conversations. I’m going to mix it all together and see what happens! 😁

More stories from Nicole Carroll and writers in Fiction and other communities.