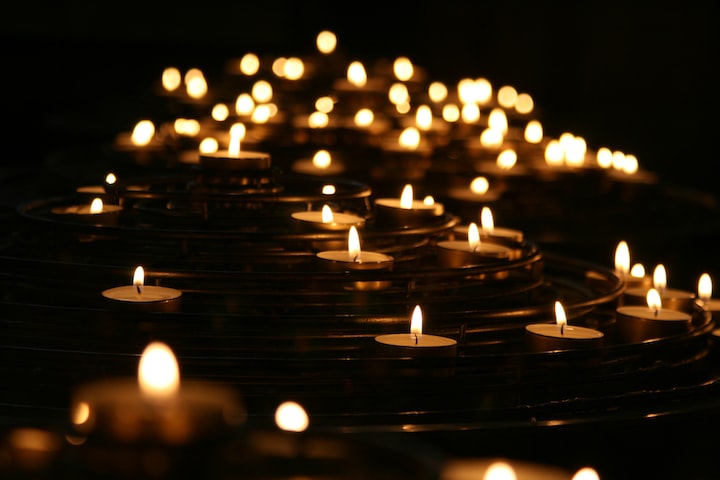 Photo by Mike Labrum on Unsplash

Teetering precariously on the ladder, Maia placed yet another candle on the ledge overlooking the stone stairs to the courtyard. The ledge was lined with dozens of candles, unlit. Tapers, pillars, tealights, all in white. Candles covered the stairs too, only a narrow walkway left free.

There was still so much more to be done.

Maia had already finished the kitchen, that grand room now covered in cobwebs and dust. The main dining room, the breakfast room, and the foyer had been next, every inch of spare space taken by a candle. The old manor sprawled across the estate, with two wings and a turret. The owners had wanted to build a castle. They’d wanted to be royalty, and they’d expected their servants to treat them as such.

Lugging the bag of candles, Maia shuffled into the master bedroom. She placed the first candle on the mantel, the fireplace cold and empty below. She brushed a dead spider off the corner then put down the next candle.

The masters of the manor had wanted to build a legacy. They had not wanted to be forgotten.

They had wanted immortality.

Maia’s mother had served them for years, always at their beck and call. Maia barely saw her growing up, and when she did, she looked wan, dark circles under her bleary eyes. She looked as if the life were draining out of her.

Maia placed a candle on the window ledge in the library. She had loved the library as a child, reading whatever books she could get her hands on. Her mother had special books she wasn’t allowed to read, and she would fantasize what secret worlds those books held.

When the library was finished, Maia moved to the east wing, to the bedroom of the master’s brother. She’d called him Uncle, not because she’d wanted to but because he’d insisted. Uncle always wore a smile, but Maia’s mother had told her not to trust it. Now, she leaned over the body to place a candle on the headboard.

The day Maia’s mother did not come home, Maia had crossed the grounds of the estate from the servant’s cottage to the main house, like she had done many times before. But the masters of the house turned her away. They did not know where her mother was, they claimed. Perhaps she had gotten lost in the woods, Uncle had suggested, his smile wide and red.

Maia went home. She knew her mother was not lost. She opened her mother’s books, having known for some time what knowledge they contained.

She read and she read. She traced the annotations her mother had made. She saw which spells had been used the most, the pages thoroughly marked, the corners dog-eared. Now she knew what she had long suspected. The masters had gained what they’d always wanted. A legacy. Immortality. And they’d disposed of her mother once they’d achieved it.

What they had not known was that her mother had lied.

Maia placed the last candle in the children’s room. They still lay in their beds after all these years, skin desiccated, stretched over prominent bones. Perfectly preserved. Immortal.

She made her way down the grand staircase to the foyer, where a chandelier overhung the center of the marble floor. She stood beneath the elaborate hanging tears of glass, the candles she had placed in the golden holders.

Immortality is a tricky thing. Eternal life can be granted but only at a cost. Maia’s mother had not told her masters the price of their legacy. And they had killed her without a second thought the moment she had given them what they had demanded.

Maia had found the notes. She had found the candles. One for each member of the family. An everlasting flame can keep someone alive indefinitely—but it must be tended to, watched and protected. When the flame goes out, that candle’s counterpoint dies.

Maia’s mother had tweaked the spell, to guarantee the immortality her masters desired. Rekindling the flame would bring them back. This alteration had satisfied them.

What she hadn’t told them was, once they died, they would never be the same again.

When Maia had found the candles, she had blown them out, one by one.

So once a year, for the past ten years, she had reminded them. She placed their candles around the vast manor, then put thousands of other candles all over the estate. Needles among a stack of needles.

With a snap of her fingers, she lit the flames of every candle, the manor lighting up in bright yellow light. The masters lumbered down from their beds, where she placed them after every time. Mummified from their years of death sleep, limbs holding on by dried strips of sinew, eyes shriveled, mouths gaping. They filed down the curved staircase where once they’d greeted famous and illustrious guests, now only greeting one person, one whom they had barely known was alive.

“You have one hour to find them,” she said, flames flickering in her eyes. “Good luck.”