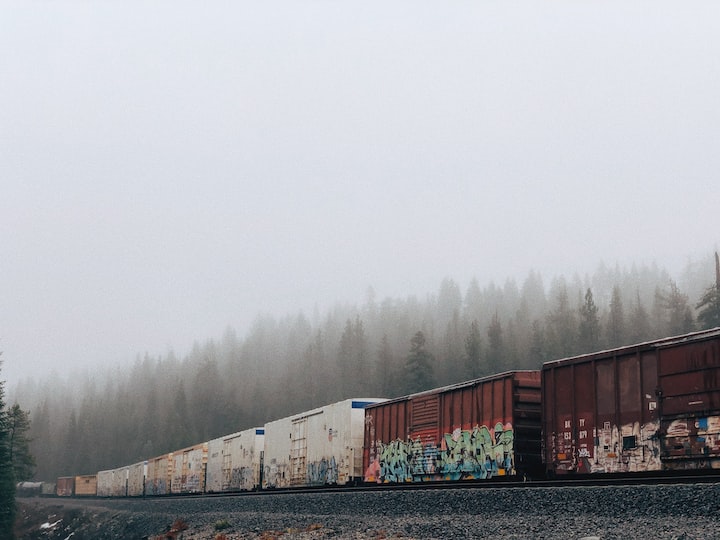 A long piercing whistle startled me awake. I forced my eyes open as I struggled to sit up. My head was throbbing. “Okay, I’m in my car and it's not moving; that’s good. It's so dark; the power in my building must have gone out. I can’t believe I was so tired I fell asleep in the back seat of my car in my condo’s underground parking! What's that low rumbling and the constant swaying feeling? Okay, crazy girl, stop talking to yourself and let’s get to your apartment.”

I flicked on the overhead dome light. I could see the interior, but the outside was pitch black. I searched my purse for my phone. It was gone.

The last thing I remembered was kissing my friends goodbye at Canoe and collecting my car from the valet. He held my keys away from me and asked me if I should be driving. I glared at him. “Don’t be ridiculous, I don’t drink and drive. I was drinking plain soda and lime.”

The valet handed me my keys, winked, and said, “Yes, I know!”

I shot him another angry look and put the key in the ignition. That was it. I couldn’t remember anything past that. I had no memory of how I wound up sleeping in my car.

I crawled over the console and got my flashlight out of the glove box. I opened the door and shined the beam around me. Walls on every side of me. Two closer and two farther away, one with two heavy metal doors. What the hell? Where was I?

Another piercing whistle sounded in three short bursts this time. It was echoed back from a short distance. The rumbling grew louder, and the vibrations doubled for a few moments. A train? I’m on a train? How did I wind up asleep in my car that was on a train?

I worked my way around the train car. I didn’t see the cooler until I tripped over it. I carefully lifted the lid. Inside was a bunch of containers with a selection of cheese, olives, and fruit. This was getting more bizarre.

Above the cooler was a cord hanging down. I followed it up and found a switch. I turned it on, and a string of vintage patio lights illuminated the entire train car. They were set up all around like it was staged for a party.

In the opposite corner was a round bin with a lid. Beside it was a roll of toilet paper, to the right of that was a five-gallon jug of water with a spout, a bar of soap, and a towel. It was now clear now that I was a captive, and I was expected to be here a while.

I continued to explore. I walked back to the cooler. On the other side was a reclining lawn chair bolted to the floor. Next to it was a small table with a tray that held a bottle of Courvoisier, Port, and Grand Marnier. Under the table was a rack with fashion magazines, travel, and glossy home décor magazines, all the latest issues.

“Okay, whatever psycho locked me up in here is fancy. Fancy, Oh my God, that’s it! After all these years, he’s found me.”

I remembered the last time we spoke. He held me very tightly and said, “Don’t ever leave me. I couldn’t bear it.”

I replied, “Trevor, I won’t leave you. Where would I go?”

He laughed and tilted my chin up to look into my eyes. “It wouldn’t matter where you go. I will always find you. You’re mine.”

I left the next day. That was five years ago. I started from scratch, waiting tables, and sleeping in a shelter until I could afford a cheap rental. I used the free outreach training programs to refresh my IT skills. With the help of my outreach coordinator, I got the transcripts showing my degree in computer sciences from the University of Toronto. I applied to several firms, careful not to apply to ones I had a prior connection with. Starting over was hard, but in those five years, I managed to make a decent salary, rent a small loft apartment, and enjoy nights out with new friends.

Five years and not a word from Trevor or his minions. I relaxed and let my guard down. The valet. I should have recognized him, even with his dyed black hair. He was one of the Astor family's fixers.

I poured a little Courvoisier into the glass and took a sip. It burned softly as I swallowed. I grabbed some brie, salami, and melon from the cooler and sat on the lawn chair. It seemed I was on my way back to the Laurentian Mountains. Back to his Chateau.

Beside the rack that held the magazines was a hard-cover book. I picked it up and ran by hand over the gold embossed title. My Birdie in the Gilded Cage, by Trevor Astor.

I filled the glass to the top with the brandy and opened the book. The train rolled on, faster and faster. I didn't care.