Cabin in the Woods

Ghost at the Pond 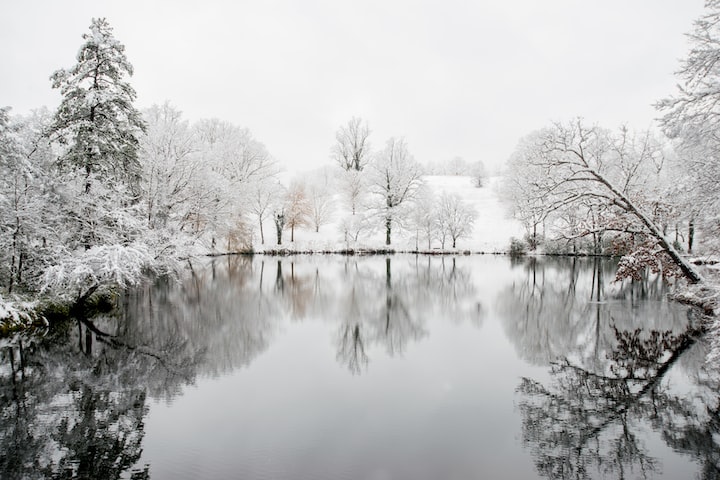 Photo by Stephen Ellis on Unsplash

Merris was thrilled she had convinced Harris to purchase a cabin that could be used all year. They didn’t sale their camper at the lake, they bought a permanent site on the mountain, perfect for skiing, tubing, or just relaxing in the hot tub. This cabin had it all, starting with a large wood burning fireplace, eight bedrooms, four bathrooms, and the largest kitchen possible. Well, they’d have it all in six months.

Cabin Masters promised her their cabin renovations would be ready before Thanksgiving, and Merris wanted to make sure they stayed on schedule, checking on the progress as often as possible. After only four months, the crew finished with the last of the construction, and completed the cleanup. It was perfect. The hearth, the mantel, the huge picture window she wanted so badly, everything she envisioned for the perfect Christmas.

After the final inspections were complete, they were ready to move in. “Harris, can you believe Cabin Masters finished in only four months? That’s two months earlier than the six-month time frame they initially gave us.”

“I’m sure they wanted to be done before the snow. I wouldn’t want to be outside working in it,” Harris replied.

“Well, I heard them talking. They said the place was haunted and they wanted to get out of here as fast as they could. They didn’t want the ghost to get them.”

“Don’t believe everything you hear. This place isn’t haunted.”

“Well, they told me to stay away from the frozen pond. That’s where it happened.”

“What are you talking about? What happened at the pond?”

“Bill, the foreman, told me a young girl fell through the ice at the frozen pond. And she haunts the pond and our cabin. He said the family that lived here before didn’t go to help her and her ghost vowed to get revenge.”

“For goodness sake. There’s no such thing as ghosts, and they aren’t haunting us. We haven’t seen or heard anything. Now forget about the girl, er ghost, and focus on getting our place ready for the holidays.”

Merris knew he was right. She didn’t believe in ghosts. If what she’d heard were true, this place would have been gone long ago. Time for her to finish cleaning and decorating the house while Harris worked on the outside.

The air was crisp, and the wind whipped around the leaves still left on the ground. Merris convinced Harris to light a fire while they worked on getting the house ready. She loved hearing the cracking of the wood, looking at the flames as they danced in the hearth. Soon their family would be here to enjoy the cabin and all it had to offer. Their first family gathering would be Thanksgiving, but they would be enjoying their cabin before then, and after. She couldn’t wait for Christmas, the aroma of the tree and food, it made her smile.

“The place looks great, Merris. Let’s relax and get some dinner. When we get back, let’s take a walk and explore. Then later, we can have coffee by the fire.”

They enjoyed dinner at the Fireside Lodge and met some of the locals and their new neighbors. They were all friendly and exchanged phone numbers. A few of them mentioned the ghost that was said to haunt the frozen pond. Most of them said it was hogwash. She and Harris agreed and laughed with the others about it.

When they left the lodge, snow blanketed their car. Merris looked at the trees and the houses. They looked so beautiful covered in snow. She imagined their cabin would look just as beautiful. If the weather continued like this, and the temperatures stayed below freezing, the kids would be able to skate on their pond at Thanksgiving.

“Don’t go to the pond. You don’t want to make the ghost mad,” Dan yelled.

They got into the car and headed back to the cabin. This weather would keep them from using the firepit, but they could still go for a walk. She loved the snow and couldn’t wait to see their property covered by it.

Merris and Harris changed quickly into warmer clothes and went for their walk. The cold air made their breath show. As she expected, their property looked stunning covered in snow. She loved seeing it sparkle on the trees, and grounds. According to the locals, the lodge would have the mountain ready for skiing and tubing by Thanksgiving. She couldn’t wait. The grandkids would be so excited.

They made their way to the pond. It looked frozen, the top had no movement and looked like a sheet of glass. She knew it wasn’t frozen, yet, but soon if the temperatures stayed as cold as they were.

“What did you say?” Harris asked her.

“I didn’t say anything.”

She hit him on the shoulder. “Stop it. No use trying to scare me, I don’t believe we have a ghost.”

“I’m not trying to scare you, I heard something.”

She heard it. Merris couldn’t make out any words, but she heard what sounded like a girl’s voice. “Harris, I hear it too, but I don’t know what it is.”

“We should get back. It’s dark and we don’t know our way around.”

Merris nodded. She didn’t believe in ghosts but the stories she’d heard were on her mind. Someone wanted to scare them, but she didn’t scare easily. She’d put an end to the stories of the haunted frozen pond and cabin.