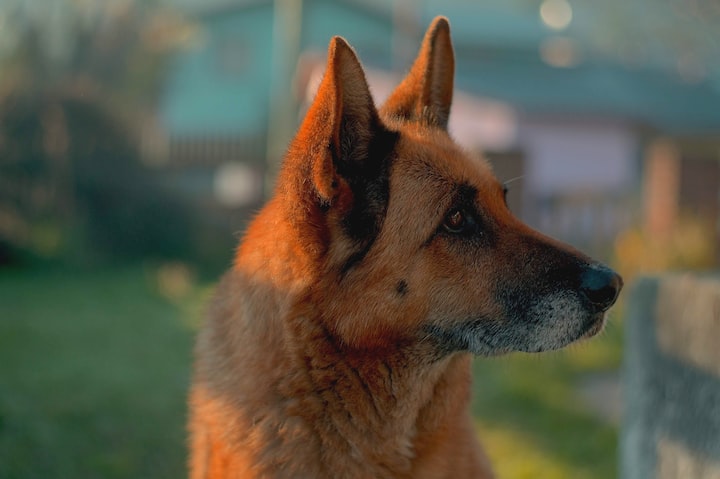 Photo by Alejo Pugliese on Unsplash

Buck sat on the edge of the bank alongside the runoff ditch. Her head bobbed like the bottle of Orange Fanta floating down what some folks called, “The River.” She’d been awake for days. Adjacent to her was the oversized plastic cooler with the precious contents she was guarding. The crinkling of a bag snagged by a metal hanger jolted her awake. She scanned the ditch for the source then, satisfied that there was no immediate danger, turned her attention back to the cooler.

She tilted her nose up and sniffed the air around the blue cooler. The lid was cracked open. She listened for the steady inhale and exhale from within. Her thick fur still had the faint char marks from the flames that engulfed her camper before. Eyelids heavy with exhaustion, she circled around, repositioned her back to the cooler, and finally slept.

Two months ago, Buck had lived an okay life. She spent most of her day outside. Her backyard was full of waist-high weeds, a plaid couch, beer cans, car parts, and a broken RV camper where she spent most of her nights. Her chain was long enough to make it to the back fence comfortably. She liked the back fence because every afternoon around 2:30 pm, three tiny fingers poked through the hole and dropped a chunk of hot dog meat or cheese into the dirt. Sometimes the fingers would scratch behind her ears, too. Those were the same fingers that cut the chain to her collar two months ago.

Two months ago, she saw the man who called her Buck in the big window of the main house. There was an unfamiliar smell about him, not Busch Lite or Pall Malls, but something rotten. She watched him dodging from one side of the window to the other. He was shouting. Not his usual shouting, but guttural, like he was in pain. He disappeared into the basement and the shouting continued as she watched fingers of smoke push out of the eaves and gutters of the house.

She growled as the smoke thickened. The hairs on her back spiked into a ridge. She barked once, then again louder and continuously, cautiously approaching the main steps to the house. Orange flames danced in the windows of the basement, where she heard the man screaming.

“Dad, I think he’s down there!” A familiar voice shouted from behind. A man vaulted over the top of the wooden fence, landing in the thick weeds. He clutched a hatchet in his right hand and a blanket in his left. Buck watched as the man smashed through the lock on the back door.

“Hey! Hey! Darrell? Are you in there?” the man yelled into the black smoke. He covered his face with the blanket, charging into the house. The billows of smoke changed directions sucking inwards towards the open door before the basement glass exploded outward, peppering Buck with shards of glass.

“Dad!” The voice screamed as a second figured appeared from over the fence with a step ladder. The familiar voice was wearing a tie-dye pink hoodie. She yanked a garden hose in between the planks of the fence, “Come on!” She tugged harder, reaching the middle of the yard, spraying the back porch, hitting the charred door with water. “Dad! Where are you?”

Buck whimpered, dragging her muzzle across the ground from the glass. The RV’s panels were melting, bits of hot plastic dropping on the ground around her. Buck barked, tugging against her collar to pull away from the heat, but her chain was entangled in a rusty engine block. The girl sprayed the sides of the RV and ran to the German shepherd. A pair of bolt cutters rested against the smoking plaid couch. The girl grabbed the metal handle, immediately dropping them as it burned the palm of her right hand. She tried again, wrapping the sleeves of her hoodie around her hands, struggling to open the rusty mouth of the cutters.

Darrell was a hoarder and a drunk. His lady had taken their two-year-old son in April—two months ago—four days before his own birthday. She said she was going to stay with her half-sister down in Elizabeth until he either, “got his shit together” or, “that virus bug” blew over, whichever came first. Since taking their son he had wanted, and leaving the dog he didn’t, Darrell drank every night. Yelling at Buck in his frustration over his yard projects he was never sober enough to finish. Socket wrenches, welding torches, bolt cutters, hack saws, and whatever else he was able to borrow from his boss were littered all over the yard.

The girl spotted a hacksaw under an empty six-pack carton and began sawing at the chain. Buck strained away from the engine block as the threads of the wire chain splintered out and eventually snapped. Buck fell backward, licking the patches of her tail where the embers had landed.  Satisfied that the dog was free from imminent danger, the girl yelled for her dad.

Black smoke pushed out of all the basement windows, and now stained the main floor windows. A hatchet burst through the side door window, and a figure stumbled out a moment later, draped in a blood-soaked blanket. It crawled away from the house, with flames dotting its jeans.

The lid on the cooler popped open. An arm stretched towards the sky. The girl in a pink tie-dye sweatshirt sat up, unraveling the pretzel her legs had been for the last four hours. The inside of her cooler home was dripping with condensation. The water levels from the drainage ditch rose to right under the dog’s nails.

“Buck?” The girl asked, petting the top of her head. The dog’s head snapped up, realizing the current was at her front paws. Buck sat up, alert, but drowsy. The girl—no older than eleven— reached down further into the cooler, pulling out a bag of bologna, her three fingers offering Buck a slice. Her father had packed the cooler before the fire. He removed a trinket from his wife’s box of keepsakes and placed it around his daughter’s neck. He said it was time to leave the city. He said they needed to go to Grandma Sawyer’s house. She lived just outside of town. He said she was prepared, and she knew they were coming.

The cooler contained five individual packets of brown sugar oatmeal, a half-eaten bag of bologna, two unopened packages of American sliced cheese, three wet socks, a pair of rhinestone converse, and the girl with braids in a pink, tie-dye sweatshirt.

The Immune patrolled the streets during the day. In most cities, they became enforcers. The girl knew the grocery store across from her school, but most stores were picked clean now, and the Immune stood guard over whatever was left. They had enough food left for a few nights. She felt like she was headed the right way, but the napkin with directions written in Sharpie and blood was shredded pulp in her jean pocket. She would know her grandma’s house if she saw it, but…

Buck scanned the drainage ditch, sampling the air for any unusual smells. The hairs on her back stood up as the faint smell of something rotten drifted from upwind. Buck crouched low in front of the cooler, growling in the direction of the stench. The girl reached for the lid, but accidentally tipped the entire cooler over, spilling herself and the remaining food, into “the River’s” current.

Buck barked louder as the stench grew stronger. The girl scrambled back up the edge of the drainage ditch, stoically watching as the packets of oatmeal and cheese were swept away in the current. She covered her nose with the sleeve of her sweatshirt. Many of the Rotten she and Buck encountered were harmless, but some were like Darrell. Buck’s barking crescendoed as the thing appeared floating on top of the polluted waters.

Buck stopped barking as the sound of tiny chirps echoed out of the drainage tunnel. The girl stood up, looking at the creature entangled in the metal hanger. It was a bloated mother duck with a snapped neck, her live ducklings instinctively following behind her. The girl stood up, leaning over behind Buck to see what it was.

“Oh no!” Already soaked, the girl waded deeper into the water, clinching the hanger and dragging it to shore, the ducklings paddling urgently behind to avoid being swept away. The girl placed the mother on a concrete slab, just out of the reach of the four ducklings. The mother’s neck wrapped around itself. The girl bent down, scooped the babies into her sweatshirt at once, and placed them gently into the now empty cooler.

Buck stepped closer, gingerly smelling underneath its feathers and rigor-tight wings. Although the duck was dead, it wasn’t the source of the rotten smell. Buck backed away from the bird, circling the girl and the cooler. The girl realized what Buck had, too. She crouched down to put the lid on, muffling the sounds of the ducklings.

In the distance, heavy, dragging, footsteps lurched ever closer. Buck stood in front of the girl with the water at their backs, snarling at the rustling in the bushes. Before the creature could make its final descent, Buck launched herself into the bushes with a fury of growls and snarls.

A high-pitched screech echoed into the early morning dew followed by an unsettling silence.

“Buck!” The girl screamed. “Nooo!” Defeated, she rested her head on top of the cooler, listening to the sounds of the tiny quacks from the cooler as shivers trickled down her spine. The dragging footsteps continued as the stench of the Rotten grew closer. A disfigured creature appeared in the bush. It held a dog collar in its left hand and a bloody machete in its right.

“Lucy? Dear sweet Jesus! Did I find my Lucy?” The figure unbuckled its belt, and several severed limbs fell to the ground. A rubber mask tossed backward, revealing a leather-faced, seventy-year-old woman.

“Grandma? Grandma Sawyer?” Lucy picked her head up off of the cooler. Her eyes swelled with tears and, with heaving shoulders, she collapsed into the arms of her grandmother. She tried to speak, but it came out in incomprehensible sounds like a dying car siren.

Grandma Sawyer bent down to her granddaughter and put Buck’s collar into Lucy’s hand. Attached to the collar were an expired rabies tag, a bone-shaped tag with the engraved name Buckley, and a trinket--the heart-shaped locket with a picture of the girl who fed her chunks of hot dogs through the hole in the fence.

“It took me a minute to knock her out, but that dog is gonna need her collar back, you know?” Grandma Sawyer pulled back the bushes revealing the breathing, but unconscious German shepherd in the grass. “She’s just as tough as you.”

More stories from Danielle Allen and writers in Fiction and other communities.