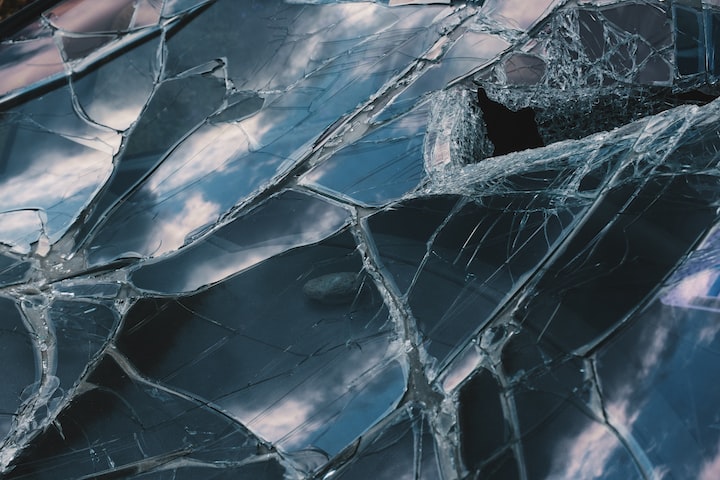 Photo by Umberto on Unsplash

As she flicked the lights off a flash of light flooded the room filling the shadows. A loud crack of thunder followed just as she reached the front door.

"And so it begins." She said aloud to herself as she flipped the sign on the door to closed.

She stepped out into the cloudy evening & pulled her keys from her jacket pocket to lock the glass door. Her springy coils whipped her cheeks & neck as a strong breeze came in from the coast. She knew that the severe thunderstorms the news had been warning of all day had finally come. The locked snapped shut, she pulled the key from the lock, and gave the door a slight tug to ensure it was locked before hustling to her car.

As she slid the key into the ignition the sky opened up. The rain poured down like shower jets soaking everything in its path before hitting the earth. She started the ignition & music began blasting through the speakers. She smiled as she turned on her windshield wipers. Sometimes the only thing that got her through her work day was knowing that the music would be there to drown out her thoughts when it was over.

She drove home through the dark stormy evening on autopilot, completely disassociating from her problems & heartache. Though she had many talents, suppressing her emotions was the one she was best at. You would never know the amount of heartache she had experienced by looking at her, she buried it so well. But she had experienced it. Hidden underneath her ever-present long sleeve shirt, she had the scars to prove it.

As she pulled into the lonely driveway she spotted the package on the illuminated front steps. It was wrapped in brown paper and she could tell that it hadn't come through the mail. Someone had intentionally sat it there, directly under the porch light for her to see. She sat there for a moment, debating whether to even get out of her car. Finally, she mustered up the courage to turn off the ignition & get out of the car.

Her pulse beat in her ears with each step she took towards the front steps. There was a sinking feeling in her gut, as though it was a ship sinking beneath waves. As she began climbing the stairs the hollowing feeling of despair washed over her. Every molecule in her body wanted to turn and run back to the car, but she was too stubborn to listen, so she kept climbing. She reached the box & stood there staring at it for a moment, wondering what might be inside.

It was meticulously wrapped in brown paper, as though it was a picture perfect Christmas present, and secured with twine that had been tied in a perfect bow. There was no name or any indication of who it might be from. She told herself that it was from her best friend. It was just a care package to help her get through this God awful week. So, she leaned down and picked it up, placing it under her arm and securing it with her ribs.

She unlocked her front door and quickly went inside, locking it back up before she walked into the living room. She sat the box on the coffee table, grabbing the remote as she sat down on the couch. As the TV powered on, she untied the carefully secured bow. Sitting there with the box untied in front of her, she flipped through the channels until she found an old RomCom that caught her attention. She rolled her eyes at the naive woman on the screen.

Her attention turned back to the box and she began unwrapping it as though it was a Christmas gift. Once unwrapped, the box revealed itself to be a plain white box, taped up at its opening. She hoped there would at least be a tea medley inside, so she grabbed her keys to cut through the tape. She opened it excitedly only to find tissue paper hiding the contents. So, she pulled the tissue paper out in annoyance.

The sound of flirty giggles filled the room, but warm, wet, salt flavored tears were running down her face. Inside her mind the memories were replaying, and there was nothing she could do to stop them. She was laying in her bed again, when suddenly she heard her little girl scream for her. Before she could get out of bed & go to her, she was being pulled out of it by her hair. She could feel it all over again, the individual pinches at the top of her neck, the tugging on her scalp as though each strand was holding on for dear life.

Then she saw it coming toward her clear as day. The steel glimmered through the dark from the street light just outside the bedroom window. Instinctively, she put her arms up to protect herself from the sharp blade. She remembered the way it had felt, having that blade slice through the skin on her arm. She lifted her arms and began rubbing her scars.

It had been exactly 10 years and 1536 miles since that dreadful night, but the painful memory still resided deep within her. How could it not? She lost everything that night, everyone. It was too painful to think about, let alone speak about, so she had never told a single soul in this town. Who could have done this?

She knew one thing for sure, it wasn't her. She was locked up in a maximum security prison on the other side of the country, serving back to back life sentences for the murder of her big sister & her father. But who could it have been, and why would they do this? Wasn't it enough torture that her little girl, her baby, had committed this atrocity? Obviously not. Someone had wanted her to relive that terrible night.

She stared into the box at the hairbrush with the letter A bedazzled on it, her older daughter Aubrey had bedazzled it herself. Next to it, her husband's watch, a family heirloom that he hoped to pass to one of their girls, or a grandson. On the other side of the brush, a large fuzzy pink pen with pink feathers sticking off the top, her younger daughter Haley's favorite item. Underneath them all, the last family photo they would ever take. Her heart ached as she began sobbing uncontrollably. It was all gone.