Bottle on a Headstone

by Raine fielder 7 months ago in Love
Report Story

What if we saw people through the eyes of their dog? 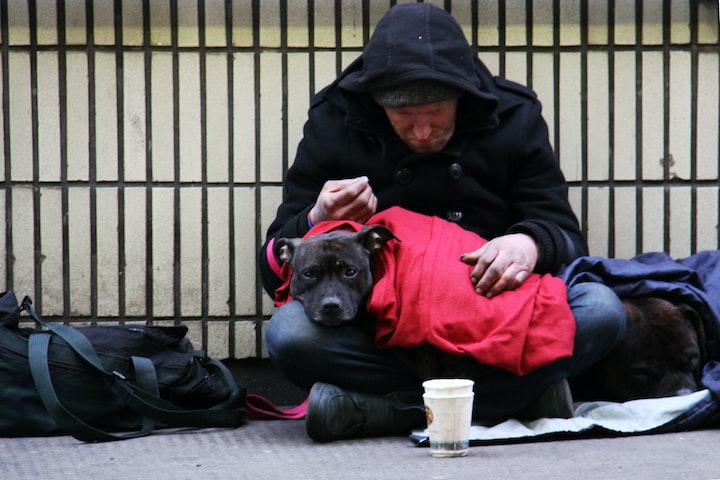 Hello, I'm Dan, I live a good life with my owner, he's the best owner any dog could ask for. I feel bad for all the other dogs I meet at the park, because their owners leave them home alone a lot to go to a job. My owner has the best job, he's a hero, and I'm his sidekick.

I guess I should start at the beginning, I was the runt of my litter, I remember when my eyes first opened and I saw my mother and siblings around me in our home. It was a little box at the back of the house. I had two brothers and three sisters. We played and ate and had a wonderful time. One by one, though children with parents would come and pick one of us to take away. I didn’t know what happened to them when they left, and I got very lonely because no one picked me. I didn’t have a father, just my mother. She was a beautiful cavalier king Charles spaniel. I’m not sure what my father was but I didn’t completely look like my mother. The humans made over my mother but didn’t much like me, they called me an ugly mutt and a runt. I guess since no one wanted me after a while, they decided I wasn’t worth the trouble anymore and threw me out. It was cold and windy and just terrible. That’s when he came. A strange man with kind hands picked me up and took me in. He rescued me, he was my hero.

I didn’t know at first what life with a hero would be like, but it was a lot more adventurous than living in a little box. That first day he told me all about his life and how he ended up being the hero this city needed. He didn’t call himself a hero though. He was too humble for that. But I knew when the first day he had me we were walking in the park and some man was wrestling with a lady and took her purse. My owner ran after the man and got her bag back.

“Thank you,” she said, offering him some money from her bag. He refused and smiled and walked back to me.

“You don’t help people to get things from them, you do it cause it’s the right thing to do,” he told me. I learned a lot from him in that first year and I began to pick up on things. I helped him rescue a lot of people and even animals. A duck caught in some sort of trash, a cat in a tree… that one was funny because the cat thought I was barking up at her because I wanted to eat her or something. I was really just showing my owner that she was in trouble. We ate well most days and slept whenever we wanted to. It was the perfect life for a dog. My owner seemed to be the happiest man around and nicest too. He treated me so well. The only time I ever saw him not happy was when we went to the stone park. A place with stones lined up in rows for some reason. My owner would take one big bottle of funny-smelling water that looked dirty and he would walk funny after he drank it. He’d drink it all and sit in front of one of the stones, which he called a “headstone” and he’d set that bottle on a headstone and cry and cry. That happened about once a week, but it didn’t stop him from being a hero the rest of the time. We found a family in a burning building and the firefighters couldn’t believe we went in and saved the whole family. My owner told me I helped the most because I could smell where the people were, and he couldn’t have done that. I knew he had superpowers though, no one could be that brave without them. There were other people like him, who lived like him in the same area. I don’t know if they are all heroes though. They never talk about it and I don’t go out walking with them.

I just know that I’m the luckiest dog in the world with the best owner I could ask for. At night we go down our alley and get in the biggest box I’ve ever seen and sleep under the stars. If it’s cold out my owner cuddles with me to make sure I’m warm. He makes sure I eat even if he doesn’t have enough for himself. He saved me and takes care of me. What more could a dog want?

Raine has been writing poetry since she was in seventh grade. She has written several poems, song lyrics, short stories and five books. Writing has been her passion for her whole life.

More stories from Raine fielder and writers in Fiction and other communities.