Bonnie and the Wolves

by Jacqueline Shea 4 months ago in Humor

A memoir of animals, superstitions, and nuts, written by Elaine B. Peacan. 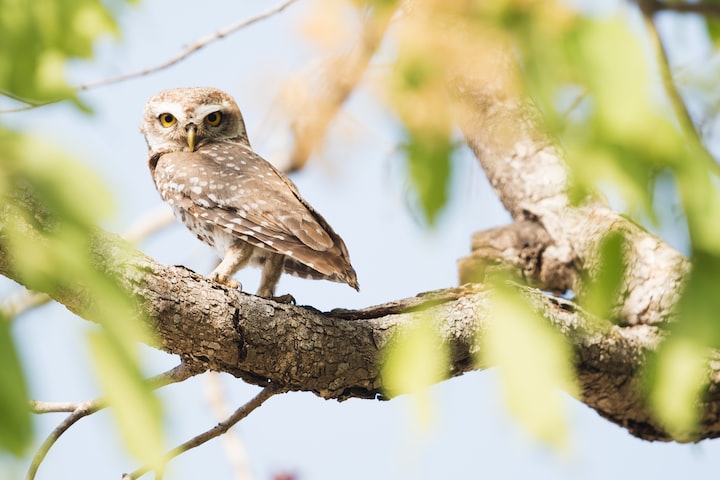 Mother always told me to beware of the barn owl.

You see, in my old-school Anglican family, belief in animal symbolism rivals that of the pagans they claim to have spiritually superseded. A hummingbird means a happy day, and the sight of a bat leads to a two-hour interrogation from my parents about where I’ve been that week. I didn’t question it much growing up, probably because I didn’t know what Ms. Durham the front desk receptionist meant when she called my parents nuts for picking me up early whenever they received a bad omen (in my defense, they do have arguably almond-shaped faces and a last name to match!).

But that all changed when I went to high school, where nuts had a whole other connotation.

My parents eventually pulled me out of my first high school to spare me the degradation that kids face these days in the public education system—their words, not mine—and transferred me to a private Christian school thirty minutes away by bus. It was when I started there that I started noticing how my body was changing—and I’m not talking about puberty. I can still hear Mother’s words in my mind:

“Lainey, where happened to the bread we bought for the week?”

“Sweetheart, why are you so moody today?”

“Honey, how is your razor blade already dull?”

Okay, I’ll admit, it does sound a little like puberty. And that’s what I thought it was for a while, just a simple delay in certain feminine developments surging forth at the ripe old age of seventeen—until I got to know Axel.

Here’s the thing: I already knew Axel, like, from classes and stuff. But I didn’t really know him until after we got paired to work together for a school project. (I know what you’re thinking, but no, we did not fall in love over crappy project coordinating and physics equations.)

Like I said before, this school is a thirty-minute bus ride from my parent’s house, and most families (read: Axel’s family) send their children to schools within a reasonable walking distance of their homes in case modern transportation were to fail. You may think I’m speaking in metaphors, but one day, the buses did fail on a day when both of my parents were stuck at work. I had no intention of working on my project with Axel that day, but I also had no intention of calling my parents and making them leave early to pick me up.

So, I asked—okay, maybe begged—Axel to switch our project workday to that night. It made sense that if I was going to have to catch a later ride that day that I might as well not make myself suffer again the Friday we’d planned for, since leaving from Axel’s house upped the bus time by twenty minutes regardless. He was oddly and unfortunately adamant that we not switch days, but I eventually broke through his tough exterior with my relentless insistence that I would go home the second the buses were running again.

Axel was not in the best mood that day, and honestly, neither was I. Not only had my ride home been delayed, but my project partner wouldn’t even offer me any snacks, even though I not-so-subtly mentioned how hungry I was at least four times—and he even ate a bowl of cashews right in front of me! (What an animal.)

It was just after sunset that the Windowie City Bus twitter account posted the last message on their long string of social media updates to inform us that service was cancelled for the night. Axel nearly growled in irritation at the news and very aggressively told me that I needed to leave. When he found out it would take my parents 35+ minutes to arrive and Uber even longer, he practically dragged me to his car to drive me home.

You can imagine how the barn owl flying past us as we pulled out of the driveway was the last thing on my mind.

I remember barely being able to sit still in the passenger seat as Axel sped down the highway, and I was still so gosh darn hungry that I was wading into hangry territory. The moment I opened my mouth to actually tell him off, though, he swerved over onto the side of the road and jumped out of his car.

I could go on about how terrifying and irritating it was to be left alone in an unlocked vehicle in the middle of some random place with no cell service after dark, but long story short, he came back ten minutes later, offering no explanation, and drove me the rest of the way home.

At home, my parents were insanely worried about me, asking me about what had happened while checking me up and down for scratches and bruises. I apologized for forgetting to let them know about my delay—in their defense, a genuine cause for concern—but they were much less concerned about my lack of contact and much more concerned with their falcon sighting that night.

To their credit, falcons were not a common site in our small Midwestern town, but after the day I’d had, all I wanted was to shove seven sandwiches down my throat and punch something. With that in mind, I broke free of their shackles—literally, their hands were grasping onto my wrist to check for cuts—and sprinted outside. Somehow, by the grace of—well, probably not God—I outran both of my parents and escaped into the woods that lined the back of our farm.

And at some point during that run, I transformed into a giant, almond-colored wolf.

I ate a poor rabbit and had an existential crisis.

When I returned after miraculously shifting back, I evaded my parents’ questioning while also coming the conclusion that what I experienced was real while also tending to a lightly sprained wrist.

Oh, and right after that, Axel’s family disappeared for two months on an extended vacation.

During those two months, I lived on the edge (of my nervous system) because I never knew when it would happen. Luckily, it only ever happened at night, and luckily, my parents forced me to play outside a lot as a kid (read: I can climb up and down trees—such as the oak outside of my second-floor bedroom window—like a monkey).

The movies and myths were both wrong about the timing—I cannot simply command it nor is it only activated by the full moon—but I soon learned that my nutty parents were on to something with their animal associations. Even though it took me a good three weeks to figure it out, I quickly realized that there was one constant indicator that a shift was coming: the appearance of Bonnie the Barn Owl.

To be fully transparent, I can’t confirm that the very first barn owl I encountered was actually Bonnie. But the one that comes to me now, lounging on the extended tree branch that nearly presses against my window, is definitely a reoccurring character. Her Bonnie-ness is clear in the eyes. (Trust me, you'd see it too.)

Apparently, barn owls are a bad omen according to the bible, but I have to say, Bonnie has been nothing less than an angel in the wings. Besides, according to Google, barn owls can also represent transformation. (Isn’t that literal!)

But, anyway, Axel’s family eventually came back, and I wasted no time in confronting him—not just about that night, but also about the project he left me to finish all by myself! Of course, he denied responsibility for both, but once I showed him my wrist, his façade slipped long enough for me to convince him.

“That shouldn’t be possible,” he shook his head in disbelief. “Even if neither of your parents were shifters, my shifting couldn’t have triggered a shift in you unless a dormant gene inside of them was passed down.”

“That you’re a shape shifter who goes to bible school.”

Axel was clearly appalled by my boldness, but also clearly intrigued. Intrigued enough, might I add, that he asked me to meet him by the Carnette River—the only one within twenty miles of both of our houses—that night.

Now, to be clear, I’m not endorsing any of the choices I’ve made. But when Bonnie showed up at my window that afternoon with that look in her eyes, I decided to take a leap of faith. (And all I could think of in the hours leading up to it was Alison Krauss’s rendition of Down to the River—I did not miss the irony.)

So, I ‘went down to the river’ that night, and lo and behold, a white wolf was awaiting my arrival. And, you know, Axel was smart about it—he brought his brother along in human form so that, in case I was some crazy wolf hunter coming to expose him, Axel himself could not be identified (since, of course, I didn't know that Alek was his brother at that point.)

After the initial awkwardness wore off—I promise, it did!—the brother actually started to tell me things. Like, the kind of helpful things that would take out some of the surprise when shifting, such as how to do it without nearly spraining a bone every time. And, against all odds, we became friends.

Or maybe it would’ve been against all odds if we hadn’t become friends, considering we’re the only shapeshifters we know within a fifty-mile radius.

Now, these days? I still don’t know how this even happened. Was no one in my family exposed to another shifter for generations? Was I adopted? Was Grandma Lucy secretly a werewolf?

She did have pretty hairy legs.

Oh, and I’m sort of dating that Alek boy now. (Look, I know I said Axel and I didn’t fall in love, but I didn’t say anything about his older brother!)

So basically, right now, I don’t have a lot of answers yet. And I might not ever get them. But, if there’s one thing I’ve learned from this whole thing, it’s this: even if their connotations are sometimes wrong, my superstitious parents were onto something after all.

More stories from Jacqueline Shea and writers in Fiction and other communities.