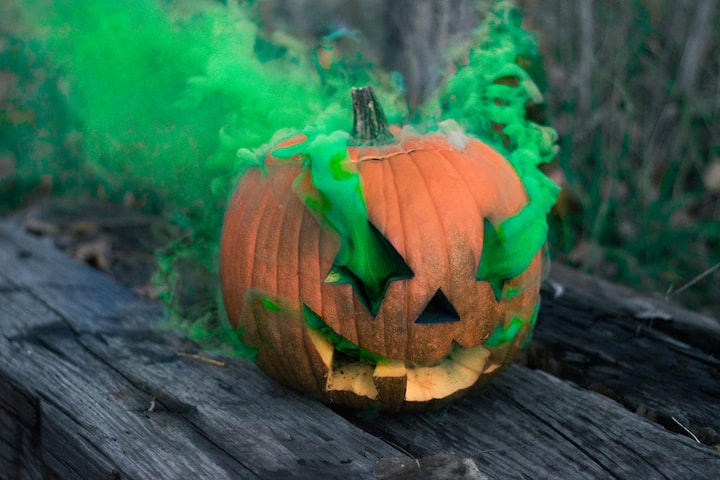 Photo by Colton Sturgeon on Unsplash

As I scrunch up tissue, I think how great my nasty skin gashes are turning out. I worked for weeks on the perfect zombie costume for the Halloween party at Michael’s house. I actually have a big crush on Michael. He’s tall, sweet, and so funny. He’s never looked at me with my braces and boring face. Maybe tonight he’ll notice my awesome costume. I had painted my skin pale green and bought white contact lenses. I shredded a pink nightgown and put leaves and blood in my messy hair. I looked great.

I walked the two blocks to Michael’s confident he would notice me.

My best friend, Jake, ran up beside me, “whoa! I hardly recognized you.”

“Shut up!” I smiled and pushed him playfully.

Jake was wearing a model of the solar system. He wore black with different planets hanging off his head. Jake loved science, and he wasn’t what I’d call popular. Michael was very popular. I’m sure being best friends with Jake made me look like a nerd too.

We got to Michael’s house. It was decorated perfectly, just as I expected. Strands of green lights were hung along the roof and porch of the house. There were skeletons and cobwebs everywhere. On the porch, a big clown animatronic jumped and giggled when someone passed by it. Jake and I walked in the front door. “Yeah!” by Usher was blasting from the DJ’s speakers. The inside of the house was decorated just as perfectly with zombie statues and lighted pumpkins.

This is it. I’m going to ask him to dance. I watched him for a few songs to make sure he didn’t have a date. After I built my courage up, I couldn’t get him alone. He was always with his jerk friends- Alex, Mark, Wyatt, and the rest of the popular crew.

I sat on the living room couch waiting for him to be alone. Suddenly, I see them giggling and they took off running toward me. Could this be some sort of romantic gesture? Is this how he asks me out? The popular boys pass me and run straight to Jake. They all grab him, lift him up, and carry him outside. Mark, who is dressed as a cowboy, quickly makes a noose and tosses it in the air. Mark waves the rope like a lasso that grabs Jake and knocks him down to the rocky driveway. The other boys jump in the back of Alex’s truck, and Alex takes off down the street dragging my best friend behind his ’92 Ford F-150.

I didn’t breathe the entire time they were gone. Only a few minutes had passed, and the truck pulled back up to Michael’s house, the boys hollering and laughing along with everyone at the party. I ran to the truck to help Jake, but he wasn’t moving. No, no, no, this is Jake! He’s my best friend; he’s okay! He is! He was pale and dirty. Their was a rope imprint burned on his neck. I sat in the rocks feeling nothing but the ache in my chest. I looked toward the house where seventy kids just stared with dumb, mouth-gaping looks.

“Get help!” I screamed with fury at these idiots who hurt the only person who understands me. Jake was all I had.

An ambulance finally came. Jake was pronounced dead on the scene from asphyxiation. The only friend I ever had was gone at sixteen years old. I sat in the driveway for hours. People tried to talk to me, but I couldn’t focus. The green lights on the perfect house were blurry now, as blurry as the rest of high school would be.