by JLB 3 months ago in Short Story 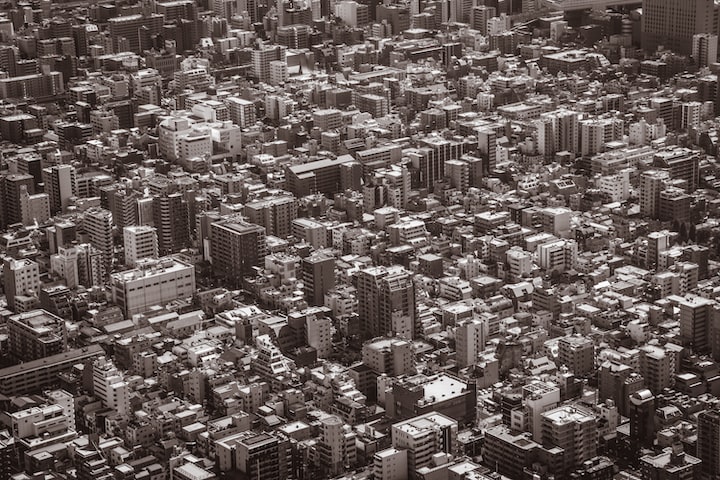 Photo by Lawrence Macaron on Unsplash

Jonas Starr leans over the kitchen sink, his elbow pressed into the cold morning metal. He pushes the Journeyman's Pro XG7 watch in front of the infrared sensor, it's red eye blinks reading the watch as the empty cup in his other hand dangles patiently below the faucet. Nothing happens, he moves the watch back and slides it into place. Again, nothing happens.

His watch blinks with energy, a projected message appears like a thought bubble hovering in the air, "be there in 10."

"C'mon, asshole." Jonas continues trying the sensor, it blinks and reads the instrument again but responds with nothing. "C'mon!" This time he jams the watch in, completely blocking the sensor, his body now hunched over the counter and his grip on the cup loosened.

Cha-ching! The Journeyman Pro XG7 chimes to life and two cups of $7.85 Best Buy water jet out of the faucet into the cup, sending it from his hand and shattering into the sink below.

"God damnit!" Jonas grabs a glucose pill from his wrist cartridge, giving up on a nice breakfast, and swallows it as he hurries to the front door. He swings on a thick blue jacket waiting for him there, the letters B.B.C.P.D shining in gold on the back and a Walmart gun waiting in the holster.

A navy blue Best Buy F160 waits for him on the street, his partner sits inside sipping from a steaming cup. Jonas approaches from the passenger's side and slides his watch into the handle, Cha-Ching! The door pops open.

"Good morning, partner." A heavy-set man with grey hair and a matching jacket nods to him.

"Hey, Phil. Does the last day feel any different than the others?" Jonas mutters out as he climbs in, his eyes greedily watching the hot coffee in Phil's hand.

"Ha! Actually, yeah. The coffee's better today." He turns to Jonas with a grin.

"So, I was thinking of grabbing an extra cup or maybe a donut, what do ya think? Want anything?"

Jonas shakes his head, trying to remove the morning grog. "No. Nah, c'mon bud, let's get to work."

"Alright, Jonas. You're right, let's get to work." Phil pushes his watch to a sensor on the dashboard, Cha-Ching! And the car hums to life, a projected series of bubbly orbs float before him. He pushes in on the orb titled Patrol, and the car rolls forward.

They pull out onto the 183 northbound ramp and merge onto the mega highway. Seven lanes stretch going north and seven south. Skyscrapers line the horizon in all directions like teeth closing in and swallowing the city. Several other highways crisscross above and below, tiny two person helicopters buzz high overhead like orderly gnats.

They drive around for hours, the morning is typical, one report of a stolen Best Buy bicycle and five roadside car distress calls. They respond to the fifth and final roadside call of the morning, their lunch break is within reach as they pull over behind a navy blue Best Buy Sapphire hatchback. Gold lights flash from their F160, the cars behind them slow down in a uniform synchronous dance, gently weaving around the right hand lane, leaving a perfect amount of space for each car to merge away, a line of ants avoiding a newly formed puddle.

A tall fellow with bright golden hair steps out waving to them. "Yeah, it just sputtered out, I don't know what's wrong." He says, shrugging.

"No worries, kid. Let's see what we can do." Phil walks to the hatchback and pushes his watch to its dashboard, a small clock projects into the air, ticking away, thinking. "It's running a diagnostic, do you want any water while you wait?"

"Sure, thanks!" The bright face calls back while watching the dazzling display projected from their watch.

Jonas unfolds the middle armrest next to his seat uncovering twelve navy blue cartons neatly arranged in the depths of the compartment. He removes one from the collection, revealing two gold Bs on the side of the carton as he brings it to the civilian.

"Ah, singular. Thanks!" He pushes his watch to the carton's barcode, Cha-Ching!

Phil still stands next to the hatchback, watching the clock spin, finally the image is replaced by a question mark. "God, criminy damn it! That's the third one today!" He huffs and walks away, "sorry sir, couldn't get a read, we'll take you the rest of the way."

"No worries." The golden haired civilian follows them to the F160 and into the backseat, his face glued to the images projected by his watch. Once everyone is inside the car pulls forward into the neat pocket created by the diverging car stream.

Phil shakes his head in the front seat, "the day Best Buy City stopped importing cars from Amazonville was the day it started going down the crapper. I mean look, they have no idea how to build one! Third breakdown today!"

"Yeah." Jonas nods while staring out the window, waiting to hear the same spiel Phil's been spewing for the past few years.

"Best Buy should've stuck to what they're good at! Water!"

"Yeah. Can't argue with that."

Phil huffs again, draining the cold remainder of coffee from his cup. "Oof, did I tell ya I almost got a transfer to Amazonville? Now there they have great benefits, I could've retired at seventy-seven instead of seventy-eight." He shrugs, "I guess it could be worse though, huh? Could be living in FB! Ha!" He says poking his elbow into Jonas' side.

Strained, Jonas responds, "yeah," while picturing who his new partner might be.

"Ah, singular." The golden haired civilian from the backseat chimes in, his face still buried in the dazzling display.

The day drags on like so many others before it, meatless Best Buy Burgers for lunch and Best Buy water to wash it down. A few more roadside calls and it's already the end of the day, only thirty minutes left until they punch out. As they sit, patrolling the highways, a gold light comes across the dashboard, a distress call from the Walmart gun store. The car immediately exits the highway and U-turns.

"Well! Looks like this is my last call, Jonas! Let's make it a good one, huh?"

"Hey, uh, while we're on the way, I wanted to give you something before I leave." Phil digs through the fanny pack around his waist.

Jonas looks at him, surprised. "Oh?"

"Yeah, well, ya know. We've been partners for awhile now and, uh, well here ya go." He slides a thin, golden chain from the pack, a heart-shaped locket twirls slowly at the end of it, he places it into Jonas' hand. "It's a family heirloom from way back, even before the Great Corporate Takeover, it's real gold. And, you know with my wife gone and no kids, I figured, well, you're kind of like a son, ha!"

Jonas stares at the necklace, the delicate chain pressed against his hand. "Oh, wow. Thank you, Phil." A bolt of guilt courses through him, he's been short with Phil all day, probably all year, and he had nothing for him on his last day.

The car turns sharply into a parking lot, a skyscraper with a white W across the front stands before them as they roll in front of the entrance.

"Jeez, Phil. I don't know, this is very nice..." He pops the heart-shaped locket open and a picture of a smiling golden retriever greets him. "Huh."

Phil is interrupted by the sound of rapid popping that knocks into their car like falling rocks. Several dozen cracks and impressions immediately materialize on the windshield, one of the impressions gives way and a hole appears, Phil grabs his chest, "criminy!" He yells, clutching himself as the pounding continues.

"Phil!" Jonas feels something whiz past, exploding the head cushion behind him. He leans over and pushes on the seat recliner on Phil's side, sending them both back below the windshield line.

Jonas can see the blood pooling from Phil's blue shirt, he presses Phil's hand to the wound. "Hold that there, Phil!"

"Only...twenty minutes from retirement." Phil says with labored breathing and a slight smile.

Jonas reaches desperately forward, his Journeyman's Pro XG7 connects to the sensor on the dashboard, Cha-Ching! The car roars back to life, he swipes a floating projected orb with a plus symbol on it. Golden lights flash on and the car reverses swiftly as panging bullets crash onto the metal cage encompassing them. The car spins one hundred and eighty degrees, the bullets now hitting the trunk, through the back-up camera Jonas can see three figures firing at them, they are clad in thickly padded black material, and on their faces are blue masks displaying two large white letters, F and B.

The next morning, Jonas is at his kitchen sink, his Journeyman's Pro XG7 pressed hard into the sensor. A light blinks on and off, the cup he holds under the faucet remains dry, a golden heart-shaped locket dangles gently from his neck.

"Mm." He groans and then his watch lights up, a message projects into the air.

"Here early, hope you're up." Sent from Phil, the watch writes.

Wide-eyed, Jonas rushes out the door, no shoes or shirt, a navy blue Best Buy F160 waits on the street, Phil waves at him from the open window.

"Phil! You're alright!" Jonas runs to the car. A plastic tube runs from Phil's nose to a backpack that expands and deflates with every wheezing breath.

"Glad to see you're okay. I-I thought you were done though? Retired?"

"Ha! You think I'm gonna let you fight those FB trolls on your-huh-own?" He looks down with a longing gaze, "also, my health insurance doesn't cover lungs, so..."

Jonas smiles. "Alright, let me get my coat."

Phil sees the golden locket dangling freely and smiles. "Let's show them what Best Buy's finest can do."

Receive stories by JLB in your feed
JLB
Read next: Little Butch