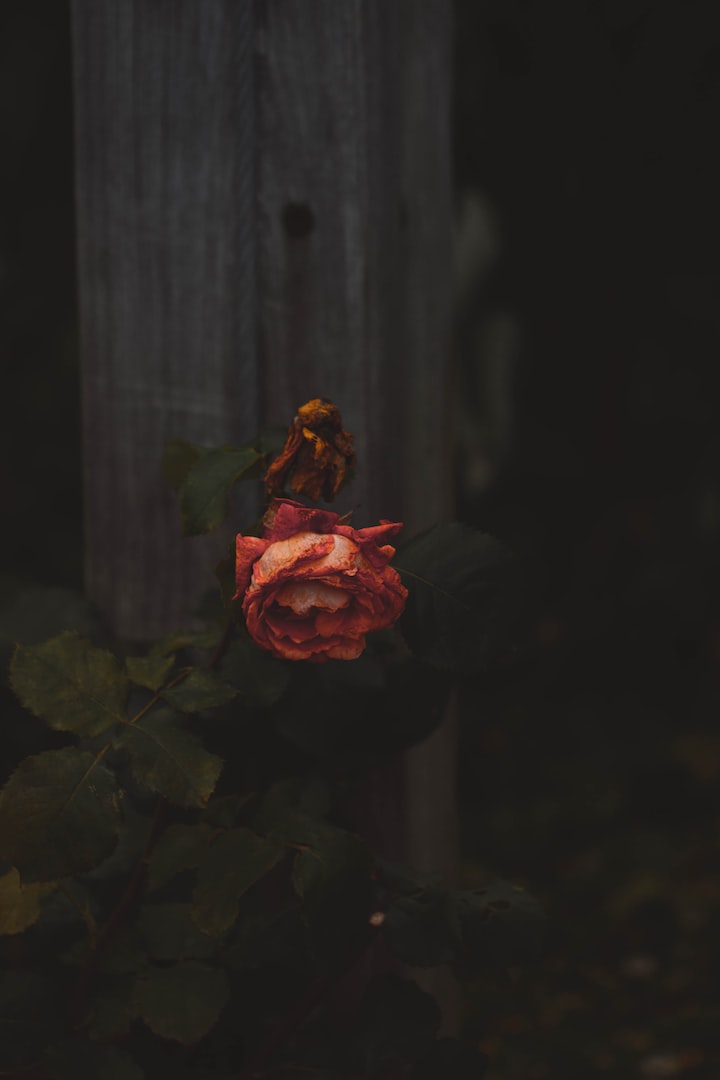 Photo by Mathias Reding on Unsplash

Animo was perched on top of his head, and despite Haganto’s quick pace, he didn’t seem in any danger of falling off. Not long after Alanus’s song last night, Animo unexpectedly climbed up to Haganto’s head and stayed there. Even though Grimoire spoke a few more times, Animo just dug into his head each time and didn’t move. Animo probably would have stayed there all night if Haganto hadn’t plucked him off so he could lie down to sleep. And even then, Animo didn’t go back to his pocket, instead choosing to sleep on Haganto’s cheek until morning, when he quickly climbed back up again.

While Haganto didn’t mind Animo staying up there, he was puzzled by the little weasel’s sudden change of behavior. He thought Animo liked staying in his pocket and was comfortable in there. Though, now that he thought about it, Animo’s first climbed up to his head right after he chugged down his stew last night. Did Animo feel something off with Haganto and staying on his head was his way of protecting or...comforting him?

“Are you alright? You look a bit flushed,” Alanus noticed, pausing the calm melody he had been playing. Forcing himself to not shake his head so Animo wouldn’t fall off, Haganto just sighed and focused his attention straight ahead.

“That’s true,” Alanus agreed before going back to playing his lute. Haganto sighed once again as he eyed Alanus, who was keeping up with him despite having shorter legs. Alanus of course stayed at his campsite last night, and Haganto hadn’t been surprised when the bard decided to travel with him until the next town. Though Alanus barely asked him for permission, as usual, Haganto didn’t mind this time, since he had been planning on escorting the bard anyway.

“You know, I’m not sure if I asked this already, but do you have a specific destination in mind?” Alanus asked while still playing the melody. “Or are you searching for any clue you can find?”

Haganto didn’t answer right away, because he still didn’t have an answer. After Alanus’s song last night, Haganto debated long and hard about going to the village of Malnora. If he went there, he could find a clue or two on how Agron got past the seal. But...that was the only answer Haganto would probably find there. Agron wouldn’t be anywhere near his place of imprisonment and not only that...he had probably left behind a lot of bloodshed in his wake. Haganto hoped that the whole village hadn’t been annihilated but even if there were survivors, he doubted they could give him any clue as to Agron’s hunting patterns. Agron was an agent of sadistic chaos after all.

But he wasn’t sure if waiting by a river would produce any better results either. It took two days of waiting for Grarvuntiess and his allies, and they had a lively elf maiden as bait. How long would it take for Agron to be tempted by Haganto? Two days of torturing many innocent lives? More? And even if it didn’t take long at all, Haganto wasn’t sure he could dodge or block Agron quickly enough when he would jump out of the water. For he was many things, but nimble as an elf maiden wasn’t one of them.

Also, the elf village he was properly raised in, Filla Aethel, was not that far from Malnora. Maybe he should go visit them after Malnora and see if they were alright…

“Haganto?” Alanus added, abruptly bringing Haganto out of his thoughts, realizing that he had yet to answer the question.

“...The latter I suppose,” Haganto answered, still not sold on either option, though there was admittedly a small part of him that longed to go home and see for himself its current state. Thankfully, Alanus just nodded and they continued their walk in silence.

A few minutes later, they found themselves on top of a hill looking down at a small town, called Bleakburn if he remembered correctly.

Haganto saw out of the corner of his eye Alanus’s smile grow wider, and he expected him to say something about the town or about how they made it in good time.

But that wasn’t the case, for right at that moment, a high-pitched wail of anguish filled the air.

“Wh-” Haganto didn’t wait for Alanus to finish as he sprinted forward and down the hill, while he tore Animo off his hair and forced him into his pocket. Animo squeaked in protest but Haganto didn’t care, not when Agron could be ahead of them. When there was another wail, Haganto increased his speed despite the risk of losing his balance. He made it down the hill safely but his alarm only grew when he reached the town gates.

There should have been guards there.

Could Agron have attacked the whole town?

Haganto charged right into Bleakburn, right as he heard another wail. He saw people gathered together in the distance, all standing still. And because of his good eyesight and because they weren’t standing in a full circle, Haganto had a clear view of who was voicing the wails. He slowed down to a stop when his eyes landed on a young man lying in a young woman’s arms.

His eyes were wide and unseeing, his chest had an arrow sticking out of it, his hair had big bald patches, his fingernails had blood underneath them, and his arms, face, and legs were covered in scratches. From the corner of his eye, Haganto saw another young man holding a bow and instantly understood what had happened.

Agron had attacked this man, probably a few days ago given he was just a human, causing the poor victim to eventually become insane and attack himself. He also must have made some kind of move to attack another villager, causing the bowman to step in and put him out of his misery.

Haganto sighed and braced himself for their reactions to the truth. He took a step forward, the noise causing a middle-aged woman to turn her head. Her eyes widened with fear as she took him in.

It was then that Haganto realized in his haste to find the source of the wails, he had forgotten that the villagers hadn’t seen him enter their village.

“Look!” the woman screamed as she pointed at Haganto, resulting in all the other villagers turning their attention rapidly on him. “It’s him! He’s the one who attacked Taul! He’s the one who’s responsible for his death!”

At her accusation, the villagers’ faces became torn with revenge and hatred while the bowman calmly took an arrow out of his quiver. He gritted his teeth as his ears detected Animo hissing at the villagers from the safety of his pocket. Haganto beat himself for not being more careful as he got ready to take out his club. He wasn’t going to hurt them, but he still had to defend himself.

But there were a lot of them-

Then suddenly, a loud twang of strings came from behind him.

“No, he didn’t!” The few villagers who had been heading towards him stopped as they looked behind him. Haganto risked looking behind him and saw that Alanus was indeed there, his hair covered in blades of grass and his chest heaving with every breath.

“He didn’t!” Grimoire echoed while Alanus sucked in a few more deep breaths before continuing.

“It was Agron! Look at Taul’s hair and those scratches that he surely caused himself! Are not those the signs of the Residuin’s venom?!”

“You’re...you’re delusional!” a man with a dark beard cried while some of the villagers murmured with fear on their faces. “Agron is sealed away in Malnora, never to return!”

“That is what we hoped.” They all turned their attention to an older man with a cane entering the scene from the left of the villagers. The man, hunched over his cane, sighed with a solemn expression before looking at the other villagers. “When I first saw Taul’s condition and heard that he had collapsed by the river, I was filled with a sense of dread, though I did not know why. But now I realized that while my mind had forgotten about the symptoms of Agron’s venom, my heart had not.”

“Just because the seal could not easily be broken, doesn’t mean it is indestructible,” the mayor interrupted the man with the dark beard with a shake of his head. “Although, if all the stories about Agron are true, then I’m sure he would find a way around the seal even if it was indestructible.”

“Then how come we haven’t heard about it?!” cried a villager who was covered by the rest of the crowd. “Surely we aren’t the only ones who have been attacked?!”

Haganto’s eyes widened as the last question echoed in his brain. In his seemingly endless debate over the pros and cons of going to Malnora, he had forgotten that the elf village had a trusted team of merchants visit them once a month for supplies that they could not grow or make themselves. And if his memory was correct, that monthly visit should have happened about a week ago.

And Erzu had been attacked roughly two weeks before that.

Haganto was taken out of his realization when the mayor turned his gaze on him.

“I have heard tales regarding a monster hunter matching your description. Are you Haganto?” he asked calmly.

“Well, you’re too late, aren’t you,” the dark-bearded man scoffed.

“Yes, what have you been doing for the last few days?! Huh?!” cried the young woman, tears still running down her angry face as she held onto Taul. “Why couldn’t you have been here?!”

Haganto only felt pity and empathy for the young woman, who just lost her loved one.

“...I was looking in the wrong place. I’m sorry,” he apologized before he turned around and began to leave Bleakburn. He paid no attention to the few taunts thrown at his back as he kept on walking.

“Are you heading to the next village?” Alanus asked him when Haganto reached him.

“No, I’m heading to Malnora,” Haganto answered him as he passed Alanus. “I’m going to find out why the word of Agron’s escape hasn’t spread yet.”

Would he find Agron there? Most likely not. But something was wrong, and something in Haganto told him he could not afford to dismiss this question. He had to find the answer, and if what he just witnessed was any indication, time was of the essence.

Haganto opened his mouth to offer farewell to Alanus, only for the bard to rush to his side.

“What? Why?” Haganto asked as surprise forced him to stop as he stared at Alanus. He knew that Alanus’s sense of danger was...limited compared to most, but this was too much, even for him. “You do remember that I am hunting Agron right? And how dangerous he is?”

“Yes, but I doubt that I am going to feel welcomed here either,” Alanus explained as he continued walking before stopping to look back at Haganto. “And honestly, is anywhere truly safe nowadays?”

Haganto couldn’t find an answer to that.

Ever since I discovered Roald Dahl when I was 10, I wanted to be an author who would delight and move her readers through her stories and characters. Do you want to go on an adventure with me?

More stories from Rebecca Patton and writers in Fiction and other communities.